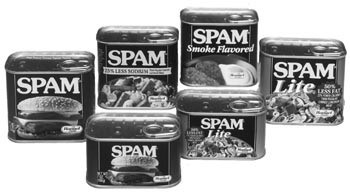 Can Do: Like a terrible, horrible Manifest Destiny–Spam is as American as mom, apple pie, and baseball.

IN EARLY JANUARY, the tiny U.S. territory of Guam, in the western Pacific Ocean, was all but devastated when powerful Typhoon Omar raged across the 209-square-mile island, almost literally threatening to blow the place–with its 150,000 residents–right off the map. The populace has been left without electricity, and with only limited supplies of food and water. There is, however, some good news.

According to Mary Harris, spokesperson for Hormel Foods in Austin, Minn., the historic company–long aware that Spam is something of a dietary staple on Guam–has generously donated 40,000 cases of the belly-filling foodstuff to the Salvation Army’s disaster relief effort on the island.

Forty-thousand cases. That works out to around six and a half cans of Spam per islander. Or 5,760,000 Spamburgers by the time the last can is scraped clean. Any way you slice it, that’s a lot of Spam. The good news doesn’t end there, either.

As a kind of bonus, the grateful Guamanians are among the first humans on the planet to gaze upon the brand-new, updated, and redesigned Spam can, featuring the first change in cover art since the canned meat’s initial unveiling in the not-yet-refrigerated spring of 1937 (yup, the product just celebrated its 60th anniversary as a sort of American food icon). The original cannister–oddly rectangular, with that nifty little key you’d have to twist around the top of the can to remove the lid–was proudly emblazoned with a full-color photo of a gleaming slab of Spam, whimsically studded with cloves to resemble a fine holiday ham. On the new cans, they’ve lost the loaf, and now display such appetizing entrées as Spamburgers and Spam salads, Spam casseroles, and something that looks like Spam-and-broccoli rigatoni.

The can’s trademark bright-blue color remains intact, as do the bold, yellow all-capital letters spelling out the name SPAM (the key was replaced with a pop-top years ago), so the islanders are unlikely to confuse their Spam with any other product. Still, the change is a significant one.

Spam remains one of the most successful food products ever created–Hormel representatives have deduced that in the United States alone, 3.8 cans of Spam are consumed every second, much of it by college students who use it as a dormitory staple. But the image of Spam has taken a number of hits in recent years: witness Monty Python’s famous Spam comedy sketch–“I’ll have the Spam, Spam, eggs and Spam; that hasn’t got much Spam in it”; and the new techno-term “spamming,” which refers to the distribution of unsolicited, unwanted junk mail over the Internet.

These days, hundreds of private websites now exist primarily, it seems, to speculate on what exactly is in Spam. Furthermore, in spite of the numbers proving that Spam is still widely consumed, you’ll be hard-pressed to find many folks who will publicly admit to liking the stuff. Hormel, unwilling to let its prized product be further transformed into a cultural joke, has begun taking steps to ensure Spam’s future.

“It’s a generational thing, you see,” explains Spam spokesperson Harris. “Young people view Spam differently than their parents did. They don’t necessarily want it to be the same Spam that mom and dad had. We also felt the label should reflect the desires of the more diverse and calorie-conscious tastes of today.”

As to the rumors about what Spam is made of, Harris rankles at the outrageous claims made by certain spurious websites, listing such odds and ends as hooves, ears, brains, and even whole baby pigs as among its routine ingredients.

“Spam,” she patiently repeats for the umpteenth time of her career, “is pork shoulder, ham, salt, water, sugar, and sodium nitrate. Period. I’m afraid the government simply wouldn’t allow us to do the things that have been said of us. Nor,” Harris–who claims to love the stuff–adds, “would I eat it if we did.”

F OR 61 YEARS, Spam has withstood such taunting and teasing, and it endures nevertheless. Along the way, a bevy of apocryphal stories and shoddy historical “facts” have been attached to the mythic meat, all of which–false or not–only shore up the assertion that Spam has become as intrinsic a part of American popular culture as baseball, happy meals, and presidential peccadilloes.

The name itself has, from time to time, served as something of a national guessing game. It is an acronym, many people believe, which stands for any number of things: Specially Processed Army Meat and Salted Pork And More are two of the more plausible guesses. But why stop there? Certain whimsical people have suggested that Spam might even stand for Super Pink Artificial Meat; Squirrel, Possum, And Mouse; or Some People Are Missing.

The truth, according to Hormel historians, is that Spam is not an acronym at all. When the product was first put on the market, it was with the name Hormel Spiced Ham, and it soon had numerous competitors with similarly uncatchy names. On New Year’s Eve 1937, a Hormel executive threw a party at which he offered a prize of $100 to the guest who could come up with the best name to set the luncheon meat apart from the others. It was the executive’s brother, Phillip Daigneau, who came up with the most striking name simply by combining the words “spiced” and “ham.” Daigneau won the prize, and in doing so secured Spam’s place in culinary history.

A forthcoming book by Linda Eggers relates this charming creation story and more besides. The Spam Cookbook: Menus from Main Street (Longstreet Press; $5.95)–served up in the shape and look of an actual Spam can (the new one)–will feature numerous informational tidbits, along with such recipes as “New England Spam Chowder” and “Chicago Deep-Dish Spam Pizza,” even a Spam and goat cheese appetizer.

“For a lot of people, Spam has always been that extra-special little secret ingredient,” laughs Eggers’ publicist Brian Peterson. “The largest group of folks with a common food affinity are the eaters of Spam. It’s almost a secret society. But it’s a very big secret society.”

IT’S A SOCIETY that’s not always that secret. Just ask any resident of Hawaii. Or Alaska. Per capita, the 49th and 50th states are the largest and second-largest consumers of Spam, respectively, in America. Hawaii’s excuse is a lack of reliable refrigeration. Alaska’s high Spam consumption rate, according to one Mr. Whitekeys, the proprietor of the Fly-By-Night Club in Anchorage, can be summed up in three words: “Spam don’t freeze.” The Fly-By-Night, predictably, serves a number of Spam dishes, including a Spam and champagne dinner. “That one’s for the lovers,” Whitekeys says.

Spam’s temperature resistance has, in fact, made it a must-carry item for soldiers, who have affectionately called it the prime rib of the U.S. military. Even Russia’s former premier Nikita Khrushchev made no secret of his love of Spam. In a letter to Hormel following World War II, Khrushchev wrote, “Without Spam, we wouldn’t have been able to feed our army.”

The universality of the Spam influence can be further proven by the success of Hormel’s latest ancillary industry: Spam Merchandise. The Spam Catalog–supported by an ever-evolving website (www.spam.com) and a 24-hour phone-line (800/LUV-SPAM)–is a certifiable global phenomenon, raking in millions worldwide for such novelties as Spam T-shirts, baseball caps, boxer shorts, beach towels, wall clocks, mouse pads, coffee mugs, umbrellas, even Spam earrings, Spam snowglobes (turn one upside down and snow falls on a tiny can of Spam), and a stainless-steel Spam golf club.

So will Hormel be releasing a 1998 commemorative Guam Disaster bomber jacket? How about a little globular bauble featuring a can of Spam sitting monumentlike on the island; turn it over and a typhoon swirls madly, eternally unable to unseat Spam from its place of honor.

“You can knock it all you want,” replies Hormel’s Harris, ever-so-patiently. “But Spam,” she laughs, “is Spam. And that’s all there is to it.”

From the January 29-February 4, 1998 issue of the Sonoma County Independent.