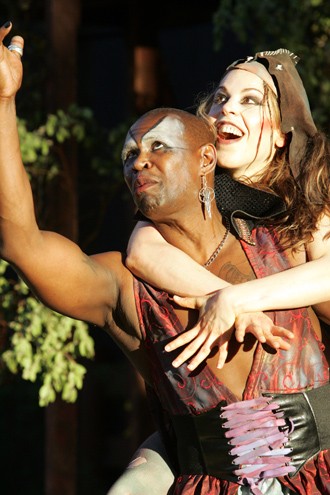 I’ve seen at least a dozen productions of Midsummer Night’s Dream, performed every which way you can imagine. I’ve seen the show staged as if by a bunch of bored circus performers, I’ve seen it staged as a Victorian dreamscape, all floating beds and doors opening onto mysterious night skies. I’ve seen modern-dress productions with kids on rollerskates and actors arriving on stage in VW buses. I’ve seen it staged as written, with the actors decked out in Athenian robes and wreaths of laurel in their hair. Until last weekend, I’d have said I’ve seen the Bard’s best-beloved comedy performed every way imaginable, but I have to admit, I’ve never seen anything like the Midsummer Night’s Dream currently running as the opener of Sonoma County Repertory Theater’s annual Sebastopol Shakespeare Festival. Running outdoors through July 26 at Sebastopol’s Ive’s Park, this production, directed by theatrical visionary and wild man David Lear, turns the show on its head, finding jokes and humor in the parts people usually play for drama, and injecting regular jolts of intensity, danger, and outright creepiness in moments usually just played for laughs. The show bears a striking visual style that defies description, but I’ll try. Think of it as Pagan-Goth-Punk with some dashes of ’70s arena rock.

Lear, known for his dependence on ideas from his casts, has assembled a band of actors who’ve truly stepped up to the task, everyone bringing their own set of skills and talents—and jewelry, facial, finger and otherwise—to the show, often in ways that are truly surprising. Shakespeare’s frisky fantasy is the story of two sets of mortals who find themselves in the middle of a forest fairy battle between Oberon and Titania, the fairy king and queen, engaged in an epic spat over ownership of a mortal boy being raised by Titania. It’s not a good time for humans to be wandering around in the woods, but here come four young Athenians, a goth-glam quartet of lovers and would-be lovers, who are about to be messed with by Oberon and his shape-shifting accomplice Puck, played with mesmerizing focus and electric sexuality by Michal Victoria. A magical love juice, applied in a very bizarre way in this production, soon brings frisky mischief down on the lovers.

Also tempting fate in the forest are a band of stoner-punk . . . . I’m not sure what they are, clad in striking red-and-black outfits and wild face-paint that make them look like the opening act for the rock band KISS. Led by would-be playwright Peter Quince, well played by Ed McLoud, and the over-eager Nick Bottom, played hilariously by Eric Thompson, this merry band has come to the woods to rehearse a very bad play, and Bottom soon becomes a donkey-eared pawn in Oberon’s plan to humiliate Titania. The inherent darkness of these themes, usually glossed over in search of side-splitting physical comedy, are emphasized under Lear’s direction, resulting in a show that is confidently, boldy weird, off-the-wall and at times explosively sexual.

As Titania and Oberon, Mary Gannon Graham and Wendell Wilson look fabulously otherworldly, strutting the stage like something conjured by JK Rowling during a fever dream, but the real sexual energy, surprisingly, takes place between Oberon and Puck, who cuddle and straddle each other every chance they get. All of the fairies, for that matter, posed in lusty little clusters, all look like they’d rather be home getting to know one another better.

While I found myself dazzled by Lear’s outlandish vision and the energetic commitment of the cast, and honestly can’t wait to see it again, there are regular uneven patches in the pacing and acting, and the aggressive strangeness of this production will clearly not be everybody’s cup of fairy flower tea. Also, some of Lear’s staging is less than friendly to the audience, placing actors so low to the stage that they are virtually invisible to all but the first few rows of lawn-chair seated audience. The haunting live music by composer Nick Alva adds an additional sense of other-than-normalness, a nice touch in a show that from the first second to the last, goes way, way beyond normal.

‘A Midsummer Night’s Dream’ runs through July 26 in Ives Park in Sebastopol. For the full schedule and ticket information, visit www.the-rep.com.