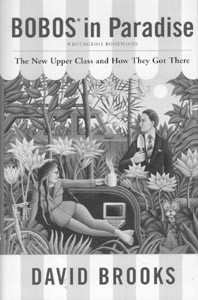 I’VE LINGERED this summer in Austin, Texas, a college town and the state capitol–and now also home to the booming computer industry and to industrious techies like Nate Hess. Thirty-seven-years-old and a Northern California transplant, Hess goes to work wearing Birkenstocks, purple hair, and six earrings in his right ear. He’s an avid Tom Waits fan and he never buys coffee at Starbucks because he’s put off by their corporate policies. Hess is a multimillionaire, and in Austin he’s got company.

In fact, this town is crawling with folks like him. They’re young, rich, and hip, and, along with their ilk around the country, they’re the subject of David Brooks’ pop sociology study, Bobos in Paradise: The New Upper Class and How They Got There (Simon & Schuster; $25).

If you don’t already know, “bobos” is shorthand for the hybrid clan that’s bourgeois and bohemian. Look at their bank accounts and they’re bourgeois; monitor their life styles and they’re bohemian.

Brooks, who recently moved from the Wall Street Journal to Newsweek, proudly calls himself a bobo. Moreover, he thinks the bobos might be the salvation of humanity since they combine the best of capitalism with the best of the counterculture, or so he argues.

No doubt about it, the bobos are here in a big way and here to stay as long as the American economy keeps going up and up. Some of my best friends are bobos–in Texas, California, and all across the country. Many of them are former 1960s radicals who now work for corporations, make lots of money, and use it to protect the whole planet and not just to indulge themselves. I love them dearly, but I’m not sure I’d want to put the fate of the world in their hands.

Part of Brooks’ problem is that he starts with a false premise. “Throughout the twentieth century it’s been pretty easy to distinguish between the bourgeois world of capitalism and the bohemian counterculture,” he writes. But you don’t have to be a historian to know that bankers have often moved to bohemia, and bohemians have often become, if not bankers, then at the least upper middle class.

I observed the phenomenon in my family. Not only were my parents bourgeois suburbanites and bohemians, they were also socialists, and so were their friends. Like many of today’s bobos, they were goodhearted do-gooders, but they were unable to prevent the Depression or World War II, and I doubt that Brooks’ good people have the power or the wisdom to prevent war, genocide, or economic catastrophe, either, though I wish them well.

If Brooks were to read Ann Powers’ polemical memoir Weird Like Us: My Bohemian America (Simon & Schuster; $23), he’d surely say that her bohemian-rags-to-bourgeois riches story illustrates his bobo thesis. He’d be right, though it might not be clear at first glance, since Powers occasionally roars like a real subversive. Indeed, she rocked the bourgeois boat back in the 1980s, then decided to travel first class.

Powers began her career as an angry, underpaid rock critic for the San Francisco Weekly. Now she’s paid exceedingly well at the New York Times, where she writes about pop music. According to the account she provides in Weird Like Us, she lives with her husband in bourgeois splendor in Brooklyn.

POWERS’ BOOK often reads like a brief in defense of her marriage, her upward mobility, and her particular brand of cultural journalism. “Rock criticism offers its practitioners the freedom of the fugitive,” she insists, as though she and the scribbling tribe of rock critics exist in a rarefied atmosphere above the rest of us. (Only someone who wasn’t ever a fugitive could think that fugitives are free.)

In the last chapter, “Selling Out,” Powers says that “we are all Judases,” and that “bohemians embrace selling out.” A therapist might say that she feels guilty about turning her back on her own countercultural past in San Francisco, and that she’s projecting her personal feeling of betrayal on the entire gang of bohemians. Maybe so.

Perhaps what’s missing most in Powers’ account is a global perspective. Indeed, Weird Like Us feels like a movie that’s been shot in close-up. You see the heroine and her small circle of friends in detail in their little enclave, but the camera never pulls back far enough to reveal the larger political and economic picture of a world increasingly divided between the techies haves and the computerless have-nots.

What Bobos in Paradise and Weird Like Us have in common is that they’re both advertisements for their respective authors and for capitalism, albeit of the enlightened variety. If you’re not bohemian and bourgeois, it’s your own fault, Brooks and Powers insist. No contemporary authors have made joining the upper class seem so pure and noble. It’s enough to make one want to escape to a far-off bohemia where the dollar doesn’t matter, where art is a calling, and nonconformity is the credo.

Jonah Raskin is the author of For the Hell of It: The Life and Times of Abbie Hoffman.