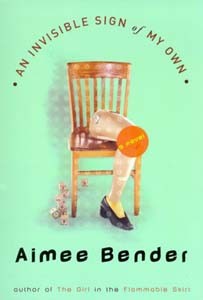 ONCE UPON a time there was a sad and very peculiar girl. She lived in an odd little town where the hospital was made entirely of blue glass and the hardware store was run by a former math teacher who wore big wax numbers around his neck to indicate his relative state of mind, with 47 indicating ecstasy and 2 indicating suicidal depression.

Neither wolves, nor witches, nor wicked stepsisters appear in these pages, but Aimee Bender is nonetheless offering us a whopper of a fairy tale in An Invisible Sign of My Own (Doubleday; $22.95).

Summed up in clinical terms, the novel’s plot (like that of any fairy tale) sounds elementary. Her psychological development thrown off kilter by a father who suddenly develops an apparently terminal case of hypochondria, a little girl named Mona Gray grows up to be a troubled young woman in love with turning away from what she loves, from piano lessons to track runs to sexual relationships.

The book’s neurotic narrator explains her decision with brutal but compelling logic: “No piano. No dessert. No track. Nothing. I am in love with stopping. It’s a fine art, when you think about it. To quit well requires an intuitive sense of beauty; you have to feel the moment of turn, right when desire makes an appearance, here is the instant to be severed, whack, this is the moment where quitting is ripe as a peach turning sweet on the vine: snap, the cord is cracked, peach falls to the floor, black and silver with flies.”

This is Bender’s first novel, but we’ve heard from her before. In 1998, she published The Girl in the Flammable Skirt, a collection of short stories also populated by peculiar characters enmeshed in bizarre situations. The collection demonstrated Bender’s truly remarkable gift for language, but the plots and people felt annoyingly contrived, bizarre for the sake of being bizarre, as artificially peculiar as an in-your-face TV commercial designed to sell you sodas by catching you off guard with cheap irony and hokey wackiness.

An Invisible Sign of My Own is something very different. Here, a gift that seemed stunted in the short-story form finds room to blossom, and Bender’s characters graduate from twitchy bundles of peculiar quirks to genuinely interesting strangers in a deeply compelling strange land.

The turning point in Mona’s life comes at age 20, when her one remaining passion–a love of numbers–leads to her being hired as the math teacher at the local elementary school. Suddenly she finds herself plunged into a world where everyone is 8 years old and 4 feet tall and full of weird but wonderful ideas about the world.

Eager to infect her young charges with her fever for word problems and multiplication tables, Mona quickly discovers what most math teachers never do: numbers don’t mean anything unless they jump off the blackboard and crawl into the real world.

So she invents Numbers and Materials, and the class quickly embraces this numerical game of show and tell–a game that underscores the book’s use of math as a metaphor. But the students keep bringing in stranger and stranger numbers from nature, starting with a hospital IV turned into a zero and escalating to a severed arm that makes the perfect 1.

Eventually things get really out of hand, as the class and its teacher struggle for possession of a sharp ax that could be seen either as a good example of the number 7 or as an excellent way to do some real-life long division. Indeed, the weapon provides one kid with a homicidal inspiration: “I have an idea, Ms. Gray, she said, let’s make a Number and Material out of you.”

This is Up the Down Staircase as told by the Brothers Grimm, or Hansel and Gretel traipsing through The Blackboard Jungle. That’d be compelling enough, but the enterprise is further blessed by Bender’s new-found ability to match her fantastic imagination with fully developed characters and a plot that moves beyond mere quirkiness to offer a compelling exploration of death and desire.

The whole thing is almost enough to make you pick up your old math book and check the margins for some magic you missed the first time around.

From the July 27-August 2, 2000 issue of the Sonoma County Independent.