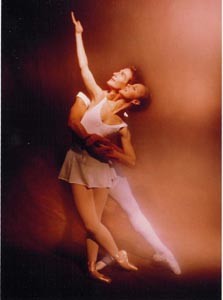 LAWRENCE PECH is a fortunate man. The accomplished ballet dancer and choreographer, a Glen Ellen resident whose dance company will this weekend stage the second annual Valley of the Moon Festival of the Performing Arts at Sonoma’s Bartholomew Park Winery, has not only thrived in the demanding dance world, but has also successfully conquered devastating health problems.

Pech’s triumphant career was set in motion in 1977 when he received formal training at the American Ballet Theater school on a full scholarship. His good fate continued when ballet star Mikhail Baryshnikov invited Pech to join ABT, where Pech danced for several years. He later went on to became principal dancer with the San Francisco Ballet.

Eleven years ago, on his 30th birthday, the lithe dancer was diagnosed with lymphoma. The cancerous disease was ravaging his spinal column. “I thought I’d never dance again,” he remembers.

Miraculously, though, Pech beat the debilitating illness and returned to the stage cancer-free. The artist then established his own 12-member troupe, the Lawrence Pech Dance Company. For the past three years, he’s also held the plum job of ballet master for the San Francisco Opera.

” ‘He knew he was really lucky,’ that’s gonna be on my tombstone,” says Pech, 40, with a slight laugh. But then he pauses thoughtfully.

He’s wondering whether some of that luck may be finally running out.

Pech is currently struggling to maintain his 5-year-old San Francisco&-based dance troupe amid financial woes and lack of public support. It’s all taking a toll in various ways. For example, the company recently scrapped the official Lawrence Pech Dance Company website because Pech could no longer afford to keep it up and running.

“It’s so hard having an arts organization,” Pech laments. He explains that his work is 80 percent administration and only 20 percent art. “I’m learning to be a businessman,” he adds, somewhat grudgingly. “But it’s tough finding the dollar.”

The dancer mentions that an eight-month plan to stage the Valley of the Moon Festival of the Performing Arts at another, more well-known local winery (which he declines to name publicly) fell through when the winery abruptly pulled out of the sponsorship and a planned $192,000 budget evaporated.

Although Pech claims he can’t get the word out about this year’s festival, since the website is down and he “can’t afford ads,” he is nevertheless optimistic about the show and excited about bringing more dance to the Sonoma County area, which he loves.

“I commute to San Francisco, but I’ve been living in Glen Ellen for three years. It’s my sanctuary,” says the artist. “I grew up in the Denver Rockies, so I’m a real nature boy at heart.”

But while living in Sonoma County, Pech says, he realized something was missing. “I became aware of all the wineries and their special arts events, but I saw there’s no dance up here,” he says. “There’s lots of music, lots of jazz, some Shakespeare–but no dance.”

Pech aims to change all that. He was featured dancer in the Mountain Play’s 1998 production of Hello, Dolly! at Jack London State Park. And the dance company plans to continue staging the Valley of the Moon Festival of the Performing Arts, an annual event which features both classical and modern dance and music in an outdoor venue.

This year’s program promises a melange of different music and ballet moves that will take the audience on a chronological journey through dance and music styles.

It opens with Concerto, a ballet for five dancers choreographed by Pech to the music of George Frederick Handel. “This is the most classical of the offerings,” says Pech.

Additional performances will include Pech and co-artistic director Wendy Van Dyck dancing Embraceable You, Ginger Thatcher’s pas de deux set to the music of Ira and George Gershwin as recorded by Etta James, which Pech describes as “smoky and almost ballroomesque.”

Also featured will be the pas de deux from Critters, Pech’s ballet about the rituals and rhythms of the natural world, set to an original score by Bay Area composer Cindy Cox. “This dance is about the mating ritual of the praying mantis,” explains Pech. “It’s quite sinister and very contemporary and fierce–the woman devours the male.”

OTHER FESTIVAL highlights will include opera arias by soprano Estelle Kruger accompanied by pianist Michael Schroeder, a Stephen Sondheim medley by cabaret singer Meg MacKay, and music by the pop-jazz fusion quartet Bogo.

Pech certainly doesn’t balk at taking chances with his work, blending the classical with the contemporary and delighting in the experimental. He wants to change the traditional image of ballet.

“There’s a stigma about ballet,” he explains. “People think they’re going to see a bunch of swans and a hero in white tights, but what we do gets more contemporary. We’re technically adept enough to do Swan Lake if we want to, but we want to introduce something more.”

The introductions don’t stop there. If all goes according to plan and the funding and community support are there, Pech will next year introduce an educational component to the festival. He envisions using the week before the performances to bring in artists and choreographers to teach school students about dance, culminating in a performance.

“We would have morning workshops and afternoon rehearsals, and the students would perform in the festival,” he explains. “It would be great, because dancing isn’t taught in schools. Cheerleading is about as far as it gets. Dancing is such a rich life, but if you aren’t exposed to it early on, you’ll go off and do other things.”

So has Pech seen an increase of dance in Sonoma County recently?

“Not yet,” he replies. “But we’re hoping to turn the tide. I know people want more of the art form up here–but I’m really looking to the community to see what’s possible.”