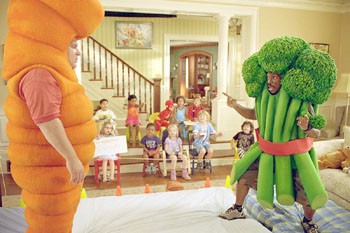 Author Harlan Coben is bullshitting. In the final hours of a two-week book tour, the bestselling New Jersey crime master (Tell No One, Gone for Good) is in Portland, Ore., where at my invitation he’s just caught a matinee of Daddy Day Care, the new Eddie Murphy vehicle that, in truth, did not inspire Coben either to laugh or cry.

“I’m the father of four children under the age of nine,” he says, after calling me up to talk about the flick. “And the only thing that moved me in this movie was the fact that–what’s today? Saturday, right?–I have basically been in a different hotel room for two weeks, and I haven’t seen my kids in all that time, so, some of the obvious, corny, heart-tugging stuff at the end of Daddy Day Care actually did start to get to me.”

“So what are you saying? Harlan Coben got teared up by Daddy Day Care?”

So let’s talk about the movie.

“First of all I felt like a total pervert going to this movie by myself in the middle of the afternoon,” Coben admits. “I mean, here’s a 41-year-old male, all alone, surrounded by moms and dads with their little kids in tow, and I’m sitting here all by myself. I felt like a creep. How about you? Did you feel the same way?”

“Try being a 41-year-old male going to see The Princess Diaries all alone,” I retort.

“What was the last, you know, adult movie that you saw?”

There comes a long pause.

“I seriously cannot remember,” Coben says. “My kids are nine, six, three, and 20 months. I don’t see movies unless they’re for kids. It’s amazing I ever have time to write.”

It’s a good thing he does. The author of 10 hard-boiled crime novels, Coben elbowed his way into the mainstream in 2001 with his crowd-pleasing shocker Tell No One. He followed it up with Gone for Good, subsequently becoming the first author ever to win the Edgar Award, the Shamus Award, and the Anthony Award for crime fiction.

His newest work, the impressively intense page-turner No Second Chance, follows a desperate father as he tries to find the person who shot him in his kitchen, killed his wife, and kidnapped his daughter. I sent him to see Daddy Day Care because, well, it’s also about a desperate father (Murphy), who tries to build a new career by opening up a day-care center in his home so he can stay close to his son.

There are other similarities. In Daddy Day Care, Murphy’s best friend gets kicked in the balls repeatedly. In Tell No One, somebody gets their ear hacked off. At a certain level, both stories are violent explorations of the lengths that some parents will go for their children. Sort of. Though nobody in Coben’s book dresses up like a giant broccoli, as Murphy does.

“Have you ever dressed up like broccoli?” I ask Coben.

“I’m not that clever with my kids,” he admits. “Though I sometimes do the ‘pizza hat.'”

“Yeah. When the kids won’t eat, I do this little stupid thing where I put the food on top of the fork, and I do this little voice, pretending I’m the fork showing off my new hat, and I’m such a show-off, so proud of my new hat, that the kids would want to eat the hat to get me–Mr. Fork–really angry at them. ‘Oh, look at my lovely hat! Isn’t it just the most beautiful hat you’ve ever seen? Don’t you wish you had a hat?’ And then they’d eat the food and he’d go, ‘Aaaaaaaah! Where’s my hat!’

“So they’d actually eat their food if I did that. The choo-choo train approach never worked that well. Tricking them into feeling hostile at the person who’s bragging about their hat, it’s very effective.”

Previous ArticleThe Girl and the Fig