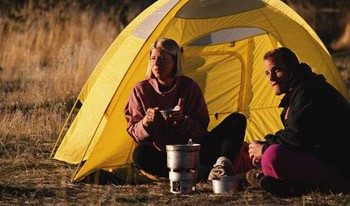 Like the weird machinations of the sex act, car camping sounds like a fool’s joke if described in its particulars. Shouldn’t your inner child scowl in grossed-out disbelief at the suggestion that it would be hecka fun to take all of the most important life elements from your home, pack them all up, drive them far away, arrive at a hardscrabble dirt pack known as Site 8, and then unload and unpack all of those elements just so that you can live almost like you do at home–but outside with the bugs and bats and snakes instead?

Sheesh. That fool’s joke is even less humorous when you consider what people used to eat when camping. Rather than the yummy, lovely stuff harbored by garden, fridge, and stove, camping often featured entire main courses composed of little more than that canned stew Fido keeps mistaking for his own. Endless tins of condensed milk were upended into bitter cups of coffee, and–to eavesdrop on the reminiscences of some Australian campers conversing over an online discussion thread–were drunk directly from the can by sneaky sweet-toothed children.

That oblong block of cheese-food, Velveeta, which needn’t ever be chilled for reasons too terrible to contemplate, figured largely in healthy outdoor meals of yesteryear. Fruit came as a cocktail, packed in another great liquid for straight-out-of-the-can drinking. And then of course, there’s that one word: beans.

Certainly, the advent of the icky freeze-dried meal lightened everyone’s load but didn’t tantalize too many taste buds. Even today, researching freeze-dried camping foods is like tip-toeing through the moldy pages of an old cookbook, except that you merely add water to the stuff, the cream of mushroom soup and pineapple bits having been thoroughly powdered by science. Chicken à la king, beef Stroganoff, turkey tetrazzini, sweet ‘n’ sour pork, and those curious astronaut flakes of ice-cream-in-a-bag are priced for the 21st century, but they don’t reflect what we want to eat in it.

Backpackers may relish a nice bag of Polynesian chicken after hiking in a few miles to a campsite, but those who limit their camping needs to the space of a car trunk can savor the concept of coolers and ice. That angry, baleful woman known as Grandma used to have to either pack all the family’s food in cans or enjoy a lovely vacation of hauling creek water in canvas bags to keep fresh things cool.

But–hooray!–Grandma looks a lot happier, and that’s not just because she now chooses cruises over camping. Join her in giving a hand to the good people collected under the Igloo brand for helping advance the art of outdoor food several generations forward with the preservation of ice.

A good cooler will keep that block of party ice partying for as much as four days, and the smart car camper who has frozen many things in advance can add perhaps an entire extra day to the chill, meaning that once you’ve hit the great outdoors, you can stay there. In his novel The Mosquito Coast, author Paul Theroux asserts that ice is the single item connoting the successful establishment of a firmly held civilization. Taking this supposition seriously, the well-planned outdoorsperson can reasonably assume Site 8 to be tantamount to the golden age of Greece, at least until next Tuesday, when the Romans arrive in the form of a soupy muck of melted water sloshing around the cooler’s interior.

Indeed, this may be the golden age of car camping, given that ice and SUVs have joined fire and Gore-Tex in commonplace availability. No longer is it necessary–or even, it may be argued, legal–to prepare such outdoor treats still shuddering in digital shame for all to see on the Internet as “Coca-Cola chicken.” (1 whole cut up chicken. 1 can Coke. 1 full bottle ketchup. Potatoes and carrots. Put chicken in a Dutch oven, pour Coke and ketchup atop, and add vegetables. Cover and cook over the fire for an hour.)

A little preparation is all it takes to hold the line between whipping up a pot of fresh pesto on the camp stove and finding oneself near dinnertime with a chicken, a Coke, and some ketchup, thinking, “Hey! I’ve got an idea!”

The guaranteed method to securing a free and unfettered al fresco gourmet romp is to work like hell indoors getting ready for it. Like Santa, lists must be compiled and checked twice. Unlike Santa, you are allowed the pleasure of putting down tasks completed earlier and then lining them satisfyingly through. Froze a meat sauce six months ago? Great. It’s gonna travel. Mark it down and cross it out.

Questions must be asked, deep and searing inquiries, such as: Exactly which utensil, pot, pan, seasoning, and ingredient does each dish require, and can it be fudged or premade? How much wine do two people honestly need for five days? And, most importantly, if it’s good for dinner, will the odd portions of it left over be good for lunch?

Those who ordinarily graze lightly at lunch or don’t eat it at all may be surprised at the large role lunch plays in camping. Fighting the tent, bounding through poison oak, hiking, stumbling, swimming, panting, and biking tend to leave one hungry. Lunch is a good thing, even better if Gruyère cheese, avocados, and ripe tomatoes find a way to marry on artisan bread with pickled red onion slices. (Put 1 thinly sliced red onion, 1 teaspoon of sugar, 1 garlic clove, some peppercorns, and 1 bay leaf in a bowl. Pour boiling water over and let sit. When cool, remove all but the onion and keep refrigerated.)

Meats to be grilled can be marinated, triple-secured in Zip lock bags, and set to rest for days in the cooler after thorough refrigeration. Pesto sauce can be made at home and frozen in advance. Save some of it to flavor a cream sauce later with egg noodles and leftover grilled chicken.

Boil potatoes and eggs first and pack for impromptu potato salad, illicit fried-potato breakfasts, deviled eggs with capers, hardy eggs on the trail, or egg salad sandwiches. Bacon, needless to say, may be consumed in enormous quantities. Ancient tales told round the campfire reveal that it has no ill effects at all if eaten out of doors.

Indeed, bread is the trickiest element of preparing to camp, particularly to those so spoiled by the yeasty abundance of our area. Other than learning to delight in the stale, suggestions are to snap up that insanely caloric treat known as “Monterey Jack and Swiss Cheese Loaf” sold by Trader Joe’s for foil-wrapping in the fire–it lets you know when it goes bad through a colorful change in hue–and to rely on crackers after day four.

As for dessert, s’mores are fine as long as you don’t have children. Even that puppyish three-year-old will suddenly possess an uncanny ability to measure minute fractional amounts, dissolving into outraged tears when the Grahams and Hershey squares have inevitably crumbled unfairly. Furthermore, hot marshmallows have been proven to suffer from a greater gravitational pull than any object other than the Earth herself and invariably aim for the dirt. Sticky, weeping, and filth-stained are not happy camping bywords, particularly at bedtime.

Brownies–now there’s a hallelujah! Having pushed cake mixes successfully to the floor of the grocery aisle, brownies are evidently our hot, hot, hot new after-dinner love interest, but the commercial ones taste like dark, gummy dust. Baker’s brand unsweetened chocolate boxes are printed with a super-easy recipe for homemade brownies that take less than five minutes to prepare for the oven. And if you’ve made them yourself, you can be assured that those two full cups of sugar will preserve anything, the squares eventually attaining a stately fossilization that’s really not too bad when accompanied by a bottle of port.

As you sit under the stars on the hardscrabble pack of Site 8, sipping the raisiny nectar of the fine land of Portugal from a plastic cup and gumming a week-old brownie, you might shrug that, sure, staring the bald facts of car camping in the face ain’t pretty. But as with other ungainly machinations, it sure is nice.