.The Girl and the Fig 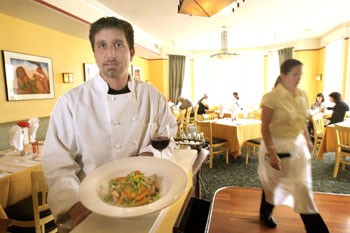 A Girl and the Chef: Chef Brian Sinnott– once of the Gaucho, now of the Fig–puts his expertise to work on the Girl and the Fig’s classics.

Actually, this case of cases brings up an important point about the Girl and the Fig’s identity. Throughout the operation’s blossoming into three outposts (Girl and the Gaucho in Glen Ellen, and the two girls and their figs in Petaluma and Sonoma), each place has maintained a healthy balance of elegance and offbeat personality.

Over time, I’ve been able to make stops at all representatives of the Girl and the Fig clan–including the original Glen Ellen site in the building that now houses the Latin-flavored Girl and the Gaucho. They all share cheerful interiors with an unobtrusive sense of humor; you can’t paint the walls in Crayola colors and nail Barbie and Ken dolls on the restroom doors unless you have a very good idea of who you are.

The Petaluma location opened this winter, and the menu is very similar, though not identical, to the Sonoma location. Chef Brian Sinnott was previously at the Girl and the Gaucho as well as the Bistro in Glen Ellen.

The newest Fig is in a lovely spot, occupying the former River House on the Petaluma waterfront. The building’s interior has a stately ambiance, as if you were the special guest in the house of an important family (the Victorian used to belong to the mayor of Petaluma–which mayor, I’m not sure). The bar is expansive and welcoming, the parlor area in front of the fireplace is bright, and the dining room is secluded.

A day before our dinner date, we received a reminder call from the restaurant to confirm our reservation–not a pushy or nagging call, but an extended welcome, a call that plays a trick on your mind, making you feel as if the staff at the restaurant will be spending the next day scurrying around, diligently preparing in special anticipation just for you.

We went on a drizzly Sunday and had a Wizard of Oz moment as we left behind the gray, blah outside for the sunny mustard-yellow walls of the interior. The restaurant’s bar extends into the front room, stylish and formidable. This would be a great place to come for an afterwork aperitif or maybe even a late-night casual meal, with the appealing brasserie dishes like quiche, croques monsieur, and steamed mussels. You can really get into the restaurant’s spirit with a glass of Figoun ($6.25), a sticky-sweet fig aperitif from Provence that’s as dark as Coca-Cola and perhaps as heady as the cocaine-laced original, with essence of vanilla, oranges, and, of course, figs.

The voluptuous pastels of Mendocino artist Julie Higgins, depicting shapely women cavorting placidly with figs, cover the walls of the dining room, just as they do at the Sonoma Girl and the Fig. And the same weighty silver figs grace every tabletop. Cheery but distracting, a bright red silk poppy stood erect in the middle of each table; we wound up moving ours to the side.

Minor glitches in the service prove to be the Girl and the Fig’s only stumbling block, elements that will hopefully straighten out over time. Our server came by and set down two small dishes of toothsome assorted olives. She seemed to know what she was doing, but after she took our orders, everything felt a beat off. Collectively, the servers must have had a communication gap. Our salads came to the table before our cheese and sausage plate, which we had ordered as a starter, and our cocktails could have arrived earlier than they did.

The salads were elegant and understated. The grilled asparagus salad ($8.95) was a symphony in green, with asparagus spears, English peas, and pea sprouts. A few spears of white asparagus and diced prosciutto fancied it up. The whole thing would have been perfect if the too-firm peas had been cooked a minute longer.

The fig salad ($9.95) is, naturally, one of the Girl and the Fig’s signature menu items. Arugula, pecans, Laura Chenel cheese, lardons of pancetta, and slices of grilled fig dressed in a port vinaigrette combine well together. It’s pleasant to see naked pecans in a salad for once instead of candied ones, allowing the subtle natural sweetness of the nuts to come through.

The cheese and sausage platter ($10.95) was a great opportunity to take advantage of the Girl and the Fig’s fantastic selection of both local and imported cheeses. Among the cheeses we selected were Cowgirl Creamery’s Mt. Tam (a triple-cream, melts-even-before-it-gets-to-your-mouth mess of goodness that’s similar to Brie) and Redwood Hill crottin (a creamy, nutty goat’s milk cheese). Coin-sized slices of peppery soppresatta (an Italian hard salami) rounded out the plate, which came with more olives, slices of baguette, and a firm dried-fig compote.

Mr. Bir du Jour ordered the pork chop ($17.95), which turned out to be massive and thick-cut, cooked perfectly, and juicy all the way to its center. Two tart, dainty fried green tomatoes, pleasantly bitter mustard greens, and a mustard sauce cut through the heap of mashed potatoes under the pork chop. This was perhaps the best of the entrées, though it seems a little early to be serving summery fried green tomatoes.

I had the wild mushroom risotto ($16.50), which I was happy to discover had about an equal ratio of savory mushrooms to rice. The rice was exactly al dente, too, not mushy or pasty, and the assortment of mushrooms leaned generously toward the chanterelles side.

The scallop special ($21.95) was a springlike medley of pancetta and English peas surrounding a circle of seared scallops and mashed potatoes. Once again, the peas were undercooked, and though the scallops were golden-brown on the outside and tender inside, the dish lacked punch.

The duck confit ($17.95) is another of the Girl and the Fig’s signature dishes, and rightfully so. They make a mean duck confit, so salty-greasy-crispy that it’s as good as candy. It came served over French green lentils in a tangy mustard vinaigrette. A curled cabbage leaf playfully stood up like a sail over the plate as a garnish–kind of cute, but a big old raw cabbage leaf lingering on the plate is not that enticing. I’m very finicky about garnishes serving a specific, taste-enhancing function.

By now full, we shared dessert, alternating between spoonfuls of profiteroles ($6) and a house-made chocolate-orange sorbet ($5.50) served in a cup-shaped tuille. The sorbet was terrific, with flavor as potent as truffle filling, and the profiteroles held centers of rich vanilla ice cream that merged lusciously with a bittersweet chocolate sauce.

I love, love, love the wine list at the Girl and the Fig, which has always been fun, user-friendly, and distinctive. Composed of Rhône varietals like Viognier, Roussanne, Mourvèdre, and Syrah, the list describes the attributes of each grape with a simplified heading so that locating a starting point is much less intimidating. Were it not for the drive ahead of us, we’d have gotten a bottle of the fresh, acidic, and flowery Jean Luc Colombo 1999 “Les Figuieres” ($26), a blend of 70 percent Viognier and 30 percent Roussanne. Thankfully, it’s also available by the glass ($6.50).

The Petaluma Girl and the Fig shares the spirit of the original, but it’s allowed to have a charm that is all its own. Once summer rolls around, the patio facing the water and the bar, with its easy-drinking aperitifs and cocktails, will undoubtedly be a strong draw. The Girl and the Fig is surely worth a visit in Petaluma as much as it is in Sonoma or Glen Ellen, based on the appealing setting alone.

Next ArticleGet Off the Bus