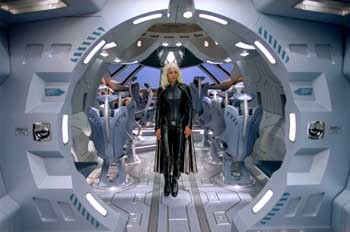 A quick introduction in X2 restates the plot of the first X-Men movie: the dreaded war between Homo sapiens and Homo superior is ready to break out. Only the dedicated efforts of Professor Charles Xavier (Patrick Stewart), the world’s most powerful psychic, can stave it off.

Xavier’s assistants are Storm, a weather witch (Halle Berry); the straight-laced preppy Scott Summers, known as Cyclops (James Marsden), who can fire a power ray from his eyes; the physician and telekinetic Jean Grey (Famke Janssen); and the energy vampire Rogue (Anna Paquin). In the background, we glimpse the brooding warrior Logan, known as Wolverine (Hugh Jackman).

After the pretitle intro, the first real dialogue quotes Abraham Lincoln’s first inaugural address. As in the better Civil War movies, we understand what both sides are fighting for. X2‘s writing and characterization pay tribute to the sturdy pulp fiction of comic-book writer Chris Claremont, who scripted the X-Men comics for Marvel during the series’ most worthwhile period, from 1979 to 1983. These stories, reflecting Reagan-era scoundrelry, are soaked in political paranoia.

Stryker is determined to use Xavier’s technology to locate and liquidate the mutants of the world. Meanwhile, Magneto escapes and rallies a counterassault with the help of his former foes and of his consort, the blue-skinned chameleon Mystique (Rebecca Romijn-Stamos, greatly improving as an actress).

The film’s level of acting shames most superhero movies. Cox is ordinarily shuddery enough, but he’s especially fearful here, giving McKellen grounds to evolve from villain to antihero. Magneto becomes as indomitable as a general. One savors McKellen’s theatrical richness as he bends a wavering young mutant with wicked advice: “You are a god in a world of insects.” As for Jackman, it’s tempting to see him as a stockier Clint Eastwood, yet isn’t he better at the late-period, award-winning Eastwood–the guilty, haunted Eastwood–than Eastwood himself ever was?

While X2 is a metaphor for political discrimination against those who are gay or the wrong color, the film also features a sly but apt borrowing from Arthurian lore to flesh out the story. The film serves up a hell of an adventure, rich in all categories, with digital animation at a new peak of skill and with the fight sequences always having something at stake.

Director Bryan Singer has once again made a successful collaborator with composer and editor John Ottman (his partner on The Usual Suspects). What’s most important is that the thrilling action here hangs on a skeleton as sturdy as Wolverine’s adamantium bones.

‘X2’ opens Friday, May 2, throughout the North Bay.

Next ArticleMarin Headlands Center for the Arts