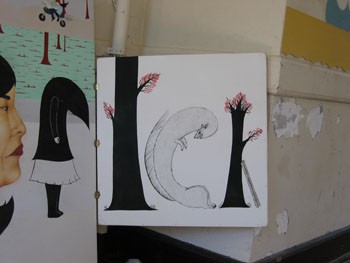 Marin Headlands Center for the Arts

Squirrely: ‘Untitled’ by Clare E. Rojas was started and finished within a week of the show’s opening.

Headlands Center for the Arts rocks the eye

A 21-year-old public arts institution shamefully neglected in these pages, the Marin Headlands Center for the Arts is an architectural marvel of shabby chic glory with pressed-tin roofs, ornate free-standing radiators, silled windows, fabulously ruined wood floors, and ages of old paint now sanded back to better illustrate the many coats of green and white once laid upon them.

One should certainly feel guilty about going all Martha about the four spare military buildings, each over 100 years old, that compose the center’s compound of studios and exhibition spaces at Ft. Barry on the Marin Headlands. Then again, one should have more to see in such a place than just the architecture. At the recent Spring Open House, some visitors were taking Polaroids of the walls–not what was on the walls, but literally the walls themselves, as they mostly upstaged what was hung upon them.

The work showcased veered wildly from the magnificent to the mundane to the simply outrageous, such as Nathan Lynch’s live performance piece “Where Is Your Wheel?” which on this day involved a film crew following the young man and his 2-foot-high pine-wheel-on-a-rope around the compound while he wore what the literature called his “signature” orange helmet. Stunts of this order are what make red-faced legislators demand fund cutting for the arts.

Clare E. Rojas and Siobhan Liddell, each working in the ballroomlike “Project Spaces,” have only just arrived to complete month-long residencies through late May. Each will give a talk on her respective work May 15.

Rojas, who appears almost shockingly youthful in person and who refused to give her age when asked, works the narrative landscape of the fairy tale in her small canvases. Using the multidisciplines of visual art, film, and music, she plans to create song cycles to accompany her flat paintings with their Russian-doll-like female characters–angry-faced, potato-bodied brunettes often sitting on beds or toting ladders–and to present a cinematic accompaniment. In the meantime, she’s run up a nice set of curtains for the front windows.

Liddell, who had only been onsite for two days in advance of the open house, works with the “nature of paper,” concentrating on “light, geology, yearning, energy, and absence,” according to her artist’s statement. Among the wonderful advantages of the Marin Headlands Center for the Arts is that Project Space artists have open studios five afternoons a week, so the unfolding of Rojas’ and Liddell’s vision can be publicly tracked.

Given glowing coverage in the January/ February issue of the art magazine Sculpture, Sanford Biggers’ artist-in-residence tenure at the center is hotly anticipated to produce some rough beauty. Melding such disparate interests as Buddhism, hip-hop culture, and the African diaspora, Biggers works with objects, dance, and video, and has lately been concerning himself with the Zen meditation on the circle.

Recent MFA graduates are also given quarter here, and the infinitesimal rock formations of Oakland sculptor John O’Malley offer that stomach-thrill of the real thing upon entering his cell-like studio. Using actual rocks, O’Malley appends tiny landscapes and figurines upon them, some of which can only be seen through magnification, to create huge evocations of other worlds upon the small plateaus that he’s plucked from the earth.

Up the road from the two main buildings, a storage depot has been superbly refitted by artist Leonard Hunter and architect Mark Cavagnero to accommodate affiliate artists who rent studio space at a greatly reduced price, providing them not only a terrific workspace but the benefit of a gathered community.

Choreographers, writers, and filmmakers also work here. For whatever reason–perhaps because they have to be established enough to pay for it?–the work exhibited by the affiliates is enormously stronger than that of the resident buildings.

For example, though sitting in a room all day sewing may have driven plenty of Victorian women mad, affiliate Anna Von Mertens’ textile sculpture shows a generous sanity. Concerned with the homey intimacy of the bed, Von Mertens stitches elaborate quilts depicting bird migration patterns, the dark map of astronomy, and even the dimensions of the earth’s surface.

Von Mertens purposefully uses no shortcuts, feeling that the labor involved to create her pieces imbues them with a further immediacy. Onsite through June, her work alone is worth the trip out to the Marin Headlands.

Clare E. Rojas and Siobhan Liddell discuss their work on Thursday, May 15, at 8pm on the second floor of Building 944. Project Spaces are open to the public Tuesday-Friday and Sunday, noon to 5pm. A salon evening with Sanford Biggers and photographer Susan Schwartzenberg is slated for Tuesday, May 27, at 8pm. Headlands Center for the Arts, 944 Fort Barry, Sausalito. These programs are free. For details, call 415.331.2787 or go to www.headlands.org.

Well, that’s it–the heart of downtown Santa Rosa has officially lost its soul. The Last Record Store, an institution for 20 years, is moving to 1899 Mendocino Ave. on June 1. “It’ll be us, Community Market, and Video Droid–three good organizations in a row,” says Hoyt Wilhelm, a familiar face to anyone who has bought music in downtown Santa Rosa. “Community Market knew we were going to move, so they called us and told us the space was available.”

The store had lost its lease at 739 Fourth St. in December (there’s a little matter of landlords Empire Property Management booting out neighbors the Old Vic that’s still very much a sore spot with Santa Rosa folk). “We knew it was just a matter of time, we’d better find a place or wind up like the Vic,” says Wilhelm. “It’s a sad day for downtown, but it’s a good day for Mendocino. There’s going to be no youth culture downtown.”

Now for some less poignant news: Exciting things are happening over at the Sonoma County Repertory Theatre. As part of a major expansion program, Jennifer King has been appointed executive director. She’ll be overseeing the “overall artistic vision and fiscal health of SCR.” King will coordinate the artistic effort with founder Jim dePriest, who continues as artistic director.

King comes from a solid theater background–from 1999 to the present, she worked with the Dallas Theater Center and California Shakespeare Theater in Berkeley and Orinda–and has a long history with SCR.

In addition to acting and directing in some of the company’s biggest hits, she helped develop the Young Actors Conservatory before leaving five years ago.