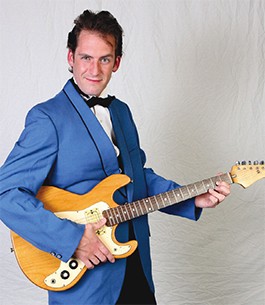 SRT's 'Wedding Singer' kicks off season with a sweet-hearted bang

The Wedding Singer, despite its occasional flaws as a musical and some random technical problems on opening night, is the perfect show to open this 36th season of SRJC’s annual Summer Repertory Theatre. The Wedding Singer, a Tony-nominated adaptation of the hit 1998 Adam Sandler comedy, is bright, optimistic and full of open-hearted, youthful enthusiasm–essentially the same attitudes that have driven SRT to become one of the country’s leading training grounds for young theater students.

It takes optimism and energy to tackle the production of five different shows, all of them running in repertory (theater-speak for “at the same time, back-and-forth, over a period of weeks”), with less than three weeks of rehearsals, set-building and dance practice to make it all happen. And it is optimism and youthful enthusiasm that draw to Santa Rosa the 60-plus performers and technicians who annually drop in from all over the world for the equivalent of theatrical boot camp. So, yes, The Wedding Singer is pretty much the perfect show to start out an SRT season.

Robbie (Johnathan Tweedie, from Johannesburg, South Africa) is a kind-hearted musician whose ’80s-era dreams of rock-and-roll fame have been replaced with a career as New Jersey’s favorite wedding singer. The ’80s mood and the character of Robbie are nicely established in the opening number, “It’s Your Wedding Day,” a spirited, upbeat anthem that tells how Robbie became a wedding singer and establishes Robbie’s belief that love will find us all.

It’s the eve of Robbie’s own wedding to the sexy but self-centered Linda (Eve Winters, from London), but in swapping philosophies of love with wedding-hall waitress Julia (Alison Plot, from San Jose), it’s clear that they instead are kindred spirits. When Robbie is left at the altar by Linda, Julia tries to coax him out of his depression by dragging him along as she shops and prepares for her upcoming wedding to the obnoxious money-hungry Glen (Joshua Roberts, from San Francisco).

Meanwhile, severely soured on the whole love thing, the newly pessimistic Robbie is persuaded to keep working, resulting in a disastrous wedding reception where Robbie and his band perform the hilarious “Casualty of Love,” during which the wedding singer leads an assortment of lovelorn misfit party guests into raucous rebellion against the happily just-married bride and groom. It is obvious that before the end of the show, Robbie and Julia will get the message that they belong together, and the pleasure of the play is in watching them slowly fall for each other, dodging obstacles and pitfalls along the way as Robbie regains his enthusiasm for love.

The cast is uniformly fine. Not only does everyone excel in singing as well as the slightly over-the-top comic acting required for this kind of show, but the dancing (not usually an SRT strongpoint) is extremely strong, in large part due to the work of choreographer Anne McAlexander. The large party numbers where the play’s dozens of characters dance McAlexander’s deliriously joyous moves are electrifying. Much of the success of this show belongs to the sure-handed direction of New Yorker Bobby Cronin, who, despite having to hurdle some technical issues, delivers the best SRT musical since 2007’s magnificent Working.

About those hurdles–on opening night, there were still several jitters and kinks that will no doubt have been worked out by the second week of the run. These include some pacing problems in the second act, when some of the energy seemed to go out of the production before recapturing it for the splashy goofy-sweet climax (which involves a Tina Turner impersonator delivering one of the best fake knockout kicks I’ve ever seen onstage), and the usual SRT microphone issues, with mikes popping on and off, and the volume careening from too loud to too quiet from minute to minute.

Despite all of this, the infectious energy of the show and competent embrace of The Wedding Singer’s sweet life-affirming heart carry the show all the way, giving the 2009 SRT season a happy kickoff that, like all memorable weddings, ends with one hell of a kiss.