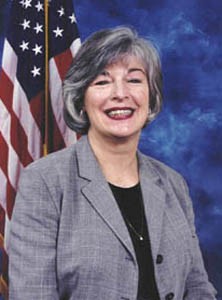 Deliver Us From Evil: Lynn Woolsey defends us from those who would trespass against us.

Lynn Woolsey and the American way

Congresswoman Lynn Woolsey has met the enemy, and it is us. To be more specific, it’s the U.S. Department of Homeland Security (DHS). Two years ago, Woolsey, a six-term Democrat who has represented Marin and Sonoma counties in the U.S. House of Representatives since 1992, opposed creation of an overarching federal homeland security department, saying the “attempt at governmental overhaul may take us too far down the wrong road, and may make us less safe.”

Earlier this month, when DHS Director Tom Ridge asked the U.S. Department of Justice to investigate what legal steps would have to be taken in order to postpone November’s presidential election in the event of a terrorist attack, Woolsey’s worst fears were realized.

“I was outraged,” she says by phone from her office in Washington. “The postponement of the November election, or any further consideration of such a proposal, would be the greatest threat to date to our democratic process.”

Woolsey immediately went into action, penning a letter to Ridge insisting that he “take no further steps to postpone this year’s presidential election.” She circulated the letter in the House, and by July 15, 191 of her colleagues–190 Democrats and Texas Republican Ron Paul–had signed on. The letter was instrumental in forcing House Republicans to draft a resolution stating that the presidential election would never be canceled because of a terrorist attack.

For Ridge, the controversy over the proposed canceling of the election has added more fuel to the fire of critics such as Woolsey, who charge that the agency’s color-coded alert system is ineffective and prone to political manipulation. For instance, Ridge’s early July announcement that al Qaida plans to disrupt this year’s election season came right after Democratic presidential candidate Sen. John Kerry selected Sen. John Edwards as his running mate, diverting media attention from the Kerry-Edwards story and back to terrorism. Yet even though Ridge called the threat “credible,” DHS didn’t raise the alert level from yellow to orange or release any specific information on the threat.

“I am deeply concerned that the Bush administration is copying and pasting old terror alerts that were later found to be fabricated,” Rep. Robert Wexler, D-Fla., told the New York Daily News. “This administration has a long track record of using deceptive tactics for political gain. One cannot help but question whether their aim was to deflect attention from the Kerry-Edwards ticket during their inaugural week.”

Other threat-level warnings that critics claim were politically motivated include the three orange alerts issued during the run-up to the Iraq war, including one on the eve of a massive global antiwar protest. Ridge has repeatedly denied that the threat alerts are politically timed.

Woolsey’s concerns about the color-coded alert system and DHS in general are more practical than political: the alert system just doesn’t seem to work that well, and DHS is diverting scarce resources from preventative measures that could do a better job stopping terrorist attacks.

“The risk is that people will get numb,” she says about the on-again, off-again alert system. “We’re telling them to be careful–but don’t forget to go to the mall.”

As Woolsey noted in her argument against forming the agency in 2002, “the greatest weakness in our pre-9-11 security was the lack of communication and coordination in intelligence and law-enforcement agencies.” The creation of DHS was supposed to improve that communication, but a report by the nonpartisan Government Accountability Office released in July found that the agency has so far done little to improve the way it communicates threat information to federal agencies and states.

“The responses we received to our questionnaires indicated continuing confusion on the part of federal agencies, states and localities regarding the process and methods that the DHS uses to communicate changes in the national threat level or recommendations for heightened security measures in specific regions or sectors,” the report found. “Without clearly defined and consistently applied communication policies and procedures, DHS may have difficulty . . . effectively communicating the methods, timing and content of guidance and information . . . the department provides to federal agencies and states.”

In March, Woolsey introduced legislation that calls for a Sensible Multilateral Response to Terrorism (SMART). Crafted with the help of Physicians for Social Responsibility, SMART has five components, including developing multilateral partnerships with other nations to track and detain terrorists while respecting human rights and civil liberties; better monitoring of weapons of mass destruction; addressing root causes of terrorism such as hunger and poverty; finding alternatives to war; and reprioritizing spending, particular on homeland security.

Woolsey is particularly concerned that neither DHS nor the Bush administration has done little to increase funding for local area responders. After 9-11, for instance, the National Guard was deployed on the Golden Gate Bridge to protect against possible terrorist attacks. When the guard was pulled off the bridge months later, the Golden Gate Bridge and Transportation District had to hire additional security employees at a cost that has so far reached $2.5 million, paid for with bridge toll receipts, according to district spokesperson Mary Currie.

“We’ve been on a high alert status since 9-11,” Currie says. While the nation is currently at an elevated or code yellow threat level, Currie explains that the four major agencies in charge of bridge security–the bridge district, the FAA, the CHP and the Park Service–are constantly on what she calls an “orange-minus” level. Currie adds that the bridge district is in the process of receiving its first grant from the DHS.

“Instead of investing in homeland security, we’re still cutting taxes,” Woolsey says. She points to known security problems that still exist, such as cargo container shipping, as proof that the United States in less safe thanks to the present administration. “We have an administration that talks a lot about homeland security. They’re really good when it comes to rhetoric. They’re really bad when it comes to follow-through.”

On July 22, the House voted unanimously to support HR 728, the resolution to protect the integrity of America’s elections drafted by Republicans but inspired by Woolsey’s letter.

Woolsey’s proud of the achievement, just as she’s proud to serve one of the most progressive districts in the nation. But she’s concerned about the future. The upcoming presidential election is vitally important, and she urges her constituents to call their friends around the country to urge them to vote.

“If we don’t change this administration,” she says, “we won’t know this country four years from now.”