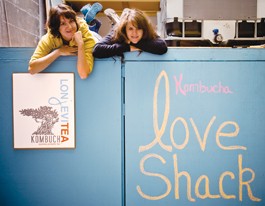 Mollie Sitkin and Michaela Biaggi drank so much kombucha in grad school together that it was only natural for the young entrepreneurs to start making it commercially. After all, why not manufacture the excellent fermented tea that had fueled late-night homework sessions and early-morning mountain bike rides while they completed their green MBA programs, especially when it received the widespread stamp of approval? “We made it for our friends and families,” says Sitkin, 25, “and they said, ‘Wow, this is the best kombucha we’ve ever had.'”

It’s been a rapid ride for the pair. In January of this year, Sitkin and her 28-year-old kombucha partner wrote a business plan. They had an investor in May, started making it in August and began selling it in October. Now, relatively overnight, Lonjevitea Kombucha is on the shelves at Whole Foods stores all over the Bay Area, and distribution is expanding at a rapid rate. “We’re using local juices, and kombucha seems to be a hot item right now,” Sitkin explains. “And we’re the only local North Bay kombucha company.”

Another local touch for the yerba maté-based tea is Lonjevitea’s Gravenstein Apple flavor, using juice from Manzana, the last apple processing plant in Sebastopol. It’s especially good for kombucha virgins. “We have a lot of people who can’t stand the taste of kombucha who actually like our Gravenstein Apple kombucha,” Sitkin says. “It’s really apple-cidery.” Lonjevitea also offers ginger and chamomile, and future flavors are dependent on the company’s commitment to finding organic ingredients from California.

And how can one not love Lonjevitea’s bottling parties? Every few weeks, Sitkin and Biaggi call up a bunch of friends, crank up the online Pandora music station, and dance the day away in their Petaluma warehouse—the “Love Shack”—while bottling. At a recent soirée, the unwelcome scourge of Mariah Carey was made bearable only by unique translations of Lady Gaga songs and Biaggi’s demonstration of “how to incorporate the ankle twist with the booty drop.” Lonjevitea is found locally at Whole Foods, Guayakí Mate Bar (6782 Sebastopol Ave., Sebastopol; 707.824.6644), Cowgirl Creamery (at Tomales Bay Foods, 80 Fourth St., Pt. Reyes Station; 415. 663.9335), Petaluma Market (210 Western Ave., Petaluma; 707.762.8452) and with locations expanding seemingly by the minute. More info can be found at www.lonjeviteakombucha.com.—G.M.

Holiday shopping and seeing Santa quickly change from fun to stressful when your young one gets hungry and cranky. The Little Gourmet in Napa cooks up the perfect solution: a place where parents can relax while feeding junior and themselves fun, delicious and nutritious meals. The menu features creative and international kid-friendly plates like

The “grownup” menu offer similar dishes, plus additional choices for the more sophisticated palate. The restaurant also offers cooking classes and hosts its second annual gingerbread house-building and decorating workshop on Dec. 13 at one-hour intervals from 11am to 3pm. Pre-registration is required. 1040 Main St., Napa. 707.257.7700.—S.D.

Sure, fruitcake is a traditional holiday food, but it certainly doesn’t have to be. That’s where Anette’s Chocolates comes in. Anette’s Chocolate Wine and Liqueur sauces, like the Chocolate Merlot Fudge ($9.95 for a nine-ounce jar), effortlessly spread over a slice of cheesecake, is the perfect post-Christmas-dinner dessert to spare family and friends the certainty of fruitcake misery.

For 19 years, brother and sister duo Brent Madsen and Anette Madsen-Yazidi have been whipping up sweet treats at their chocolate factory in downtown Napa. Truffles, caramels and brittle abound, but their Chocolate Wine and Liqueur sauces, enhanced with the rich flavor of red wines or liqueur, truly take the cake. “The sauces are always popular, especially for the holiday season,” says Anette. “You can drizzle them on any dessert to make it a little extra special.” And with little less than 5 percent alcohol in each bottle, the sauces pour as liquid, so they won’t harden on guests’ plates as they indulge.

The selection of sauces includes Chocolate Port, Belgian Chocolate Brandy, Chocolate Raspberry Liqueur, Chocolate Amaretto and a luscious caramel Butterscotch Scotch. “Our bestselling across the board is the Chocolate Cabernet wine sauce. The combination of chocolate and wine is just, well, perfect,” Anette says.

Known for spooning the chocolate sauces right out of the jar and into his mouth, brother Brent puts it simply, “The sauces are basically truffles in a bottle.” His personal favorite? The Chocolate Martini Gonaeche Sauce ($18.50 for a 12.5 ounce bottle). “I’ll eat it just on ice cream or have a spoonful in the evening,” he says dreamily. To indulge in chocolate bliss, the sauces are available through the company’s website at www.anettes.com or at Anette’s Chocolates, 1321 First St., Napa. 707.252.4228.—T.M.

Get Yer Vegan On

San Rafael’s Beverley Starno didn’t think much of it when her husband Roman first dipped a Fig Newton in melted baker’s chocolate 15 years ago. And then she took a bite. Not bad. So very not bad, in fact, that the couple decided to make their own chocolate-dipped fruit bars as a family side business now known as the Roman Bar. Roman kept his day job while Beverley peddled them to Whole Foods. Once the megastore indicated that it, too, liked the product, she got a distributor, and the Roman Bar—think of it as the Clif Bar’s more sophisticated cousin, home after a few years in India and Paris—is now in specialty and upscale markets all over the Bay Area and beyond.

But many families have dipped something in chocolate, declared it good and not started a side business devoted to it. Why did the Starno’s? “Roman thinks big,” Beverley says. “He likes to hit it out of the ball park.”

And after 15 years, the couple are still fans. “Roman eats one for lunch,” Beverley says. “When you’re dieting, they’re good. I try not to eat too many. We’re surrounded by them, but I still like them.”

Roman Bars are available at most Whole Foods and specialty markets in Marin and Sonoma counties, including such odd shops as Fairfax Lumber (109 Broadway Blvd., Fairfax; 415.453.54778).—G.G.

When he was seven, Zack Zimmerman fell in love in with the wine industry. He would watch his dad on construction sites, renovating wineries and doing business with the owners. But it wasn’t until he grew older and began following in his father’s footsteps that he realized how young adults were somewhat shunned by the wine business.

“Not all of us want to show up to barrel tasting with our frats in party buses and get plastered,” says Zimmerman, a 24-year-old who is soon to graduate from Sonoma State with a double major in wine business strategies and marketing. He believes that young wine connoisseurs can be just as committed to the big business as their Gen X counterparts. So in June he launched the social networking group Wines for Millennials and Beyond through MeetUp.com. “I started the group with the sole purpose of bringing anyone and everyone who enjoys wine and the atmosphere surrounding it together,” Zimmerman says.

The group now has over a hundred “vino cohorts,” evenly distributed in age from 21 to around 70. Sponsored by local wineries that quickly heard of Zimmerman’s group, the group was quickly able to take their mingling offline and meet at wineries for tasting events. “I’ve been lucky,” says Zimmerman, who plans to hold more offline group meetings as the movement grows.

He hopes his presence as a young entrepreneur and wine lover will impact the industry for the better. “This is my passion,” he says.

For more information, visit the group’s site at www.meetup.com/wines-for-millennials-and-beyond.—T.M.