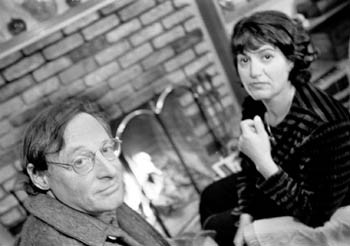 Talk is Cheap: Yitzak Green and Hanan Mogannam talk it out in their dialogue group.

Giving It a Chance

Here in Sonoma County, peace can be made. Why not elsewhere?

The latest Palestinian intifada has burned on for years now, and there is no resolution in sight. Here among Sonoma County’s Jews and Palestinians, it’s been about 10 months. Friends have been made, conflicts resolved. Seven thousand miles away from the Middle East, people with land of their own–holy land in its own way–can talk, cry, and attempt to heal. Their families in Ramallah, in Jerusalem, in the occupied territories, cannot.

For almost a year, a group of Jews and Palestinian Christians have embarked upon a quixotic journey into themselves–away from conflict, away from bombs and terrorism. They tell stories about their past, about their families and their misconceptions. They share coffee and tea.

Faced with brothers and sisters dying, imprisoned on their own land, terrified for their safety, what can one do? Mediators have accomplished very little. Anger compounds the issue. By looking into their own community, the participants in this dialogue group have found a solution that works for them. Not a solution to the conflict, but a solution to the daily anger and frustration that news of the conflict evokes. And perhaps more, always the hope for more.

In past months, the group, which calls itself Becoming Allies, has reached outside itself to encourage people to think about the issue as it relates to individuals. In July, an event at Sonoma State University brought together an Arab and an Israeli to talk about their stories, shared and otherwise. In conjunction with the Rialto theater, the group presented two nights of dialogue in August after screenings of the touching documentary Promises. And on Nov. 16, Becoming Allies will screen the film Children of Abraham at Santa Rosa Junior College, with a dialogue session to follow.

Yitzak Green, a healthcare consultant and mediator, is an organizer and participant in the dialogue group. “This is not a conflict between strange nations; these are cousins–our ancestors are brothers,” he says.

The group focuses on personal stories because, according to Green, “[People are] learning that the suffering in the families who left Palestine since the occupation is not unlike the suffering in the Jewish families after the Holocaust. They go through the same depression, anger, foisting it upon themselves, upon their family members, and then maybe come out of it, maybe not.”

One of Green’s cohorts in dialogue is Hanan Mogannam, a Palestinian Christian with relatives in Ramallah. Sitting with Green and Mogannam in Courthouse Square one morning, we have a dialogue of our own. In measured and fair terms Mogannam explains her interest in the project. It’s been difficult, she says, to find Palestinians–Muslim or otherwise–who will partake in the dialogue.

“It’s painful and it’s risky and it takes a lot of courage, and they don’t want to bother because what’s the use, is it going to do any good? I feel it on my own part with what I’m doing. I do it because I get something out of it and I think something good will come out of it for other people, but it takes a lot of emotion–there’s anger and frustration. Look at the situation, look what we’re hearing on the news.”

The group tries to avoid talking about what’s happening on the news, because it gets too disheartening. “I’m more encouraged to think that if we can somehow get people to speak to the emotional rather than the rational–the personal family stuff rather than the political-national stuff–we’re likely to at least become friends and be able to talk to one another. I think that can spread,” says Green.

Separating the emotional and the rational, however, when emotions rule over these two nations and their diasporas and rationality ceased to exist 10 years ago, is a challenge.

“It’s easy and it’s superficial to just say that, well, if Arafat only got unhooked or if Sharon got unhooked and if we had someone like Rabin or whatever . . . I’m tired of those conversations, they don’t go anywhere,” Green says.

In the dialogue process, though they share personal stories about their histories and personal lives, Green, Mogannam, and the others can’t avoid sharing their thoughts on how to resolve the conflict. They appear to be largely in sync: The settlements–Israelis reclaiming land within the Palestinian territories–must go; pre-1967 borders must be implemented.

“Settlements are a mistake,” says Mogannam. “The ones who want peace in Israel and are willing to get out of the settlements are not in control.” Green agrees: “On both sides, the extreme factions are in control.”

Outside their largely sympathetic dialogue group, however, all participants encounter opinions that mirror the brutal emotions felt across the world. Green explains, “I had this experience meeting with an elderly Jewish woman who’s filled with anger toward Palestinians, and it’s hard to talk to her without evoking her anger.” Green, employing his listening skills, didn’t counter her rage. “I said, you know, I want to give you all the space you need to say that, and I want to be here to see what we have to talk about after it gets out.

“So one of the things that we’re learning,” Green continues, “is that it takes some training to have the patience to listen to someone’s anger and pain, because we want to get beyond it. ‘How much land do you want? How much security are we going to get’–that’s a conversation that, if we’re in fear or in anger, is a very difficult one to have.”

When it comes down to it, although both groups have strong opinions about the governing bodies and their ineffectiveness, it is the stories that they return to.

“There are a lot of people with stories here–a lot of holocaust survivors, a lot of people who left since the occupation,” says Green. “What if we spent three or four months in churches, in temples, in movie theaters, wherever it is, and we heard from these people. And then those people went to their cousins and said, ‘You know what I heard?’ and then they say, ‘You know, I think I’ve heard something similar in my town.’ And then we hash it out over coffee.”

The emphasis is on humanizing the combatants, who–in the eyes of their enemies–are more often excoriated as animals. Terrorist animals, land-grabbing animals, murderous animals.

“Everybody’s ideology consists of wave the flag and throw some bombs and it will all be better,” says Green. “That’s only a way to immortalize those who have chosen to give their lives to this–I mean suicide bombers. It’s not like going out and meeting somewhere in the streets or in homes and saying, ‘Hello, I’m a human being and so are you, let’s have a cup of coffee.'”

Mogannam counters: “But right now, for you and I to do that, it’s not difficult. I’ll do it, and I don’t feel any hostility from you. I feel like we want the same thing for that part of the world. But for people over there, to say, ‘Hello, can I have a cup of coffee?’–there’s a lot of stuff you have to go through to get to that point. . . .”

The global-local link is utmost on their minds, because though they gain personally from their dialogues, all of the participants have a larger purpose in mind: peace. “I think it will spread out,” says Mogannam. “I think people have to get educated. Once they see that there are human beings here who’ve got stories [and that] there are injustices on both sides, they will stop and see that it’s not going anywhere, that there’s got to be another way. Because it’s got to change here before they change over there.”

That someplace could be Sonoma County. It could be anywhere–people in liberal pockets across the country are seeking resolution to a conflict that’s miles away but so closely tied to nation and religion, race and heritage.

“That’s why I think that maybe we’re in a really unique place,” says Green, “because we’re far enough from the bloodshed so that we feel comfortable enough to have that conversation. And maybe those who are closer to it and have difficulty reaching that point can hear about the fact that there are relatives here talking when it gets peaceful enough. And maybe they can put down their guns long enough to at least learn about these conversations.”

Mogannam says multiple times during our conversation that there is no choice: “You live side by side–isn’t that what everybody wants? They’ve done it in the past. Eventually it’s going to happen. It has to happen.”

The wisdom of distance is powerful, but are the emotions at the core of the conflict surmountable? Hope is all there is.