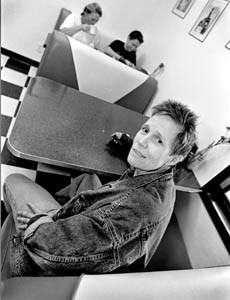 Who wants to go to D’s Diner?

People can tell you a restaurant is good, and that usually piques interest. But film a restaurant in a movie (Mel’s, from American Graffiti), name an album after it (R.E.M.’s Automatic for the People), write about it in a book (Fat Slice in Dave Eggers’ Heartbreaking Work of Staggering Genius), and suddenly there’s this mystique about the place–which is the kind of thing that graces our goofy little lives, these brushes with public domain immortality.

It’s why I take visiting friends to Red’s Recovery Room in Cotati and say, “Hey, this is the place that Tom Waits gave a shout-out to in ‘Filipino Box Spring Hog.'” And then my friends say, “Neat! What’s up with that photo tiger on the pool table?”

It’s why today you are reading yet another of several recent reviews of D’s Diner in Sebastopol. Local bass virtuoso Les Claypool composed an ode to D’s on his latest solo album, and D’s took steps to alert us to this fact. “Lo and behold,” wrote D, “Les has written a glowing restaurant review in the form of a very funky song.” Though the lyrics are indeed lively (“Grab a booth or sit outside / Have a dose of rainbow pride”), the song itself is sort of a throwback to the quirky darkness of Primus days.

Anyway, the whole Les Claypool affiliation was intriguing, and the diner’s shameless little ploy to get our attention worked very well. For a while it sounded like a good idea to con Les himself into being a Mr. Bir du Jour, but (a) he’s on tour right now, (b) the song is actually a more acute review than this here one will ever be, and (c) Greg Cahill seems to interview Les every few months or so for this very paper, and if I intervened it might disturb the special media relationship they’ve forged. Since Les seems to know what he’s talking/singing about in “D’s Diner,” though, why not utilize his musical recommendations as a dining guide?

There’s a place just off the Gravenstein / Where the milkshakes flow like wine . . .

Wine does not flow at D’s, nor do any other alcoholic beverages, which is not surprising for a diner housed in a re-outfitted Foster’s Freeze. The interior dining area is small, with booth space a commodity. Stools line a counter that faces outside to Healdsburg Avenue. Red and white and black all over, the decor is very much in keeping with diner tradition. You have to order at the counter, which is only partly in keeping with diner tradition, but the staff does bring your order out to you.

The best damn breakfast burrito you can get anytime . . .

Right on, Les. Eggs, potatoes, and cheese all wrapped up in a flour tortilla and drizzled with a dark New Mexico red chile sauce. You can get breakfast-type pork products inside the burrito if you want. I didn’t, because what a splendid model of simplicity this breakfast burrito was! Not too much cheese, not greasy at all, and just the perfect size. The moderately spicy chile sauce provided all of the flavor needed. At $3.95, this is a cheap and reasonably wholesome breakfast.

The ketchup is Heinz, and it says “fancy” right there on the bottle, though at D’s it’s in red squeeze bottles. The straws don’t bend, which leads me to suspect Les needed a word to rhyme with “pa.”

D’s does have a reformed ma-and-pa edge to it–as opposed to refined, and there is nothing refined about D’s (thank goodness!). The reformed part comes into play through touches like the organic Ecco Cafe coffee they serve or the canola oil they fry with or the real maple syrup you can get for 75 cents extra. An average ma and pa would also not have a stack of old Martha Stewart Living magazines available for reading pleasure.

D herself (that’s Deborah Klein) has a doctorate of philosophy from the University of New Mexico. What else can you do with a doctorate of philosophy besides open a diner? There are lots of things to be philosophical about when it comes to diners. In our American culture, the ideals diners represent–accessibility, promptness, casualness, thrift, pastel Formica, and bottomless cups of coffee–are hallowed ground. D’s is very mindful of this; it has a good feel to it.

Bring your daughters, bring your sons / They serve their franks on gourmet buns . . .

Mr. Bir du Jour liked his hot dog bun just fine. D’s Big Dog ($3.50), with relish, chopped red onion, kraut, and tomatoes, is a high-quality affair, an all-beef 1/4 pound kosher dog on said fancy bun, toasted. The hot dog itself is butterflied and grilled, which made it brown and crispy on the edges.

This comes with all the regular burger extras–red leaf lettuce, tomato, red onion, pickles, and mayo–but there’s the added bonus of a grilled pineapple ring and a boatload of teriyaki sauce basting the patty. A good idea, but the burger was a mite too salty from the concentrated teriyaki sauce. And what’s mayo doing hanging out with pineapple and teriyaki anyway? For the tasty addition of pineapple, this was almost a $5.25 burger–but not quite. Remember when that Wendy’s lady said “Where’s the beef?” in those commercials from the ’80s? She’d ask it here too.

Gotta get fries ($1.50) with a burger. They are crinkle-cut and crispy, everything you need diner fries to be, period. A side of sweet potato fries will cost you one buck more. Sweet potato fries are tricky–sweet potatoes have more moisture than regular potatoes, so it’s tough to make them crispy without burning them–but D’s hits the nail right on the head. Deep orange-gold and thin, these restored my faith in deep-fried sweet potatoes.

These pancakes are good enough to eat at any time of day, or all day, should your constitution allow. Pancakes are dangerous things. They go down so yummy on a leisurely weekend morning, but five minutes after polishing off a plate, the dreaded pancake fullness, a leaden sensation in the stomach, sets in. It has been known to spoil entire days.

But–glory be!–D’s pancakes did not produce the dreaded pancake fullness. Tangy and light but not too fluffy, these were some of the best restaurant pancakes I’ve ever had. Malt that buttermilk! Try the Hasty Tasty Breakfast ($3.95), a moderate plate of one egg, two strips of bacon or one sausage, and two smallish pancakes.

Les never does say anything about the tasty barbecue menu at D’s, which is certainly worth mentioning. They slow-smoke their meats over mesquite, an investment whose flavor and tenderness comes through lusciously in tender, rich meat. The rib plate–three pork ribs in apricot sauce with a choice of two sides–barbecue beans, cole slaw, or fries–was a huge helping of meat ‘n’ stuff for $6.95. Apricot barbecue sauce may sound hoity-toity, but it contributes to a sweetness that’s fruity rather than cloying, and sugary, tangy, and peppery but not particularly spicy.

The Sloppy Jones spicy pork sandwich ($4.95) shared a similar flavor, only it was thinly sliced, super-moist pork butt, flecked with bacon and doused liberally with sauce. The meat of both the ribs and the sandwich was superb, but arrived at our table only lukewarm, which is somewhat disconcerting. Beans were OK, coleslaw was bland. I was full of candylike pork and didn’t mind.

After all these trips to D’s, I can see why Les wrote a song about the place. When Les returns from his current tour, D’s is going to present him with a Golden Spatula (“Spatty”) award for Most Prolific Regular. Woe to local would-be songwriters who had intentions to immortalize their favorite diner in song. Les has dibs on the coolest one.