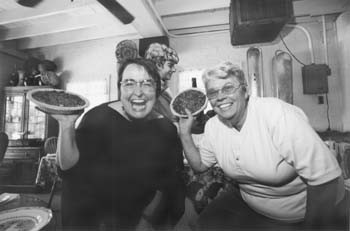 Love that country pie: Angie Lewis and Shirley Palmisano have created a festive west county restaurant with all the flair of a Mardi Gras celebration.

THE AFTERNOON air on Forestville’s main drag is hazy with the last overcast day of early summer. A glance through the screen door leading to Chez Marie’s dining room reveals only a roomful of sturdy chairs and on the wall old-time photos of somber children. But a knock on the screen and a timid halloo bring forth a bustle of activity from two smiling women, who set a piece of pecan pie and a cup of coffee in front of their visitor faster than you can say “cream, please.” The pie perfumes the room with bourbon. Though alcohol in cooking usually isn’t supposed to have an intoxicating effect–“it carries the flavor,” explains Shirley Palmisano in a characteristic outburst of cooking wisdom–this humble dessert gives up a pleasantly warm buzz after the third bite.

All the better to appreciate that mysterious blend of atmosphere and cuisine–hearty Cajun and heartfelt country French–that Palmisano, and Angie Lewis, her partner of 35 years, have created for almost a decade at the simple wooden storefront wedged between a rug store and a liquor purveyor.

Palmisano and Lewis fell in love with the area after years of venturing forth from an unsatisfying urban habitat–in their case, San Francisco–for canoe trips and Christmas trees. When Palmisano’s midlife crisis/Saturn return kicked in and she decided to quit her job as a clinical lab technician, Forestville was the undisputed choice.

What the two women would do once they landed was never in doubt either. “We knew from the get-go, from the time she decided to change careers,” says Lewis, who continued putting in hours as a nurse in San Francisco hospitals until her retirement three years ago. “I said, ‘That’s fine, but you gotta go and get some education. I want you to go to school somewhere, so we know what you have and what you don’t.'”

As it turned out, Palmisano had plenty: she began teaching classes at the California Culinary Academy right after graduating from that prestigious school. She is careful not to say a word against the institution or its faculty, but that teaching gig must have felt good after 18 months of condescension and grunt-work. At one point, the academy instructors were even directing Palmisano and classmates on the finer points of peeling an onion. “The idea, you see, is to make you feel as though you’re a little apprentice back in the old country,” says Palmisano with a smirk. “That’s difficult to do to a 40-year-old woman.”

Especially a 40-year-old French-Italian-American who simmered in New Orleans cooking and culture longer than a rabbit in a stew pot. Anything less than fluent mastery of the basics of good cooking could almost be considered a genetic mutation.

“I didn’t appreciate the home that I came from,” says Palmisano between sips of good strong coffee. “The French side of my family did all the classical French, but they were little bastard dishes. Instead of it being court bouillon [a fine fish stock], I grew up knowing it as coo-bee-yong.” Her jaw swings sweet and low to accommodate the Cajun twang. “Cajuns used the same techniques as classical French, and added the fresh things that were around them.”

PALMISANO continues this tradition today, preparing almost everything on-site–bread and all–and procuring most of it from surrounding farms. The women grow crowded half-barrels of sorrel and other herbs in the smallish backyard behind the restaurant and occasionally offer some homegrown lettuce or tomatoes to lucky diners.

Even the purple and green beaded necklaces spilling over the tables for their Tuesday-through-Thursday Cajun cafe were hand-harvested by the two women over the past couple of years at New Orlean’s Mardi Gras celebration.

This gathering instinct might explain some other things, like the battery of copper pans along the ceiling and the 1,500 cookbooks that line the walls of the cozy apartment off the dining room (“I read them like novels,” Lewis admits). The two women even seem to collect customers. Chez Marie draws in a steady stream from both local folk and devoted travelers, one of whom dropped in during an SSU conference on the advice of her neighbor in Ithaca, N.Y.

OTHER THAN by word of mouth, the restaurant isn’t advertised and is rarely reviewed; the only text coming out of the kitchen is the simple menu and an occasional newsletter.

But with Palmisano the sole kitchen worker and Lewis greeting and waiting on tables, the two don’t have time to put a lot of work into outreach. They don’t need to.

“When you come through our door, Angie’s incredible,” says Palmisano. “She knows everybody.”

Lewis accepts the praise rather shyly, but answers readily when asked how things have changed for them as a couple since taking on the restaurant, which is named for their mothers May and Mary. “We’re learning new and different things,” she says as she rests her hands in her lap. “I’m learning how to not always be in control, and she’s learning how to step on me gracefully.”

“That was nicely put,” chuckles Palmisano, who is carefully forking into a piece of pie.

“And we have fun,” says Palmisano. “We don’t work any more.” Then she reconsiders. “Well, no, we work our butts off sometimes, we work hard physically, but we’ve never enjoyed work as much as we do now.”

“And,” interjects Lewis into her partner’s interjection, “I get to do what I went into nursing for. It’s all about taking care of people.”

Indeed. “Ministering angel” doesn’t begin to describe the person who serves up such a pie.

A splash from the bottle makes this treat something to eat slowly, with many pauses to sniff appreciatively. The only thing that could stand up better than coffee to the aromatic sweetness would be coffee with another slug of liquor.