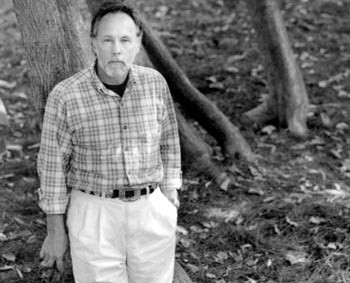 Author Barry Lopez gets passionately angry about ‘Passion in the Desert’

David Templeton takes interesting people to interesting movies in his ongoing quest for the ultimate post-film conversation. This time out, he teams up with esteemed nature writer Barry Lopez to see the adventure film Passion in the Desert.

BARRY LOPEZ pushes through the swinging double doors, which close behind us with a reverberating thwap-thwap-thwap as we stand blinking in the bright light of the sunny afternoon. Glancing back in the direction of the little dark screening room we’ve just escaped, Lopez shudders perceptibly, as if to shake off the memory of the film we’ve just seen.

“I found it tremendously offensive,” he says of Passion in the Desert, an adaptation of Honoré de Balzac’s 19th-century novella about a despicable French soldier–lost in the Egyptian desert and pursued by evil, bumbling Bedouins–who develops a dysfunctional, semi-erotic bond with a female leopard. Lopez, whose award-winning work (Arctic Dreams, Of Wolves and Men) has for years offered poetic and keenly focused insights into the natural world–and humankind’s disturbing love-hate relationship with that world–has no problem with the idea of the film or, at least, the idea of Balzac’s original work. It was merely the film’s simple-minded execution of that idea–and what my guest detected as its unsettling underlying message–that has provoked his considerable moral outrage.

“Briefly,” he calmly declares, taking a seat at a nearby cafe and pulling his undoctored mug of coffee even closer, “this film was a complete adolescent fantasy, a piece of psychotic European racist rubbish.”

But Lopez is hardly finished. In fact, throughout the next half hour, while seldom raising his baritone above the soft volume of casual conversation, this esteemed adventurer–a man who’s visited both the Moab region of Utah and the mysterious deserts of Jordan, those two very different locations that were made to stand in for Egypt in the film–repeatedly finds himself searching for the best words with which to sum up the essential baseness of Passion in the Desert.

“It’s all about white power,” he observes at one point. “It’s about the ineptitude of indigenous people, the interchangeability of landscapes–it doesn’t make a damn bit of difference whether you’re in Utah or Jordan–it’s all crap.” Later, he says, “It’s all the notion that nature is window dressing for human ideas. It’s a film made outdoors by people who live indoors and have never been outdoors in their lives.”

In reference to a scene in which the soldier, driven to jealousy by the intrusion of a frisky male leopard, weaves a rope and ties up the female, he says, “The whole thing was patently misogynist. Why in God’s name did he tie her up? I’ll tell you why. Because ‘The bitch wouldn’t do what she was told.’ I’m telling you, this stuff is at the heart of modern pornography. Some bad films you just let go of afterwards because they’re silly, but this–this thing has a component of evil in it.”

Ultimately, debating the film’s comparison to old Tarzan movies, Lopez offers, with a hint of chuckle, “Oh, I think Tarzan is a cut above this. I’d rather have seen two hours of Johnny Weissmuller,” followed by, “I just want to go home and take a shower to get this film off of my skin,” and finally, “Frankly, I was embarrassed for the animals.”

But back to the idea of the film.

What about the notion that “civilized” people, cut off from society and lost in the wild, might end up discovering a bit of ancient wildness within themselves, might be altered forever by the enormity of that experience? These are thoughts that have always intrigued human beings, including such authors as Rudyard Kipling, Jack London, Louise Erdrich, Walt Whitman, and Gretel Erlich. In Lopez’s own work, especially his stunning new collection of essays–About This Life: Journeys on the Threshold of Memory–an open-eyed and open-minded observance of the natural world always results in profound emotional transformation.

“It’s the great European longing for reunion with nature,” Lopez nods. Extending his left hand, he tightens it into a grasp, explaining, “We’re always trying to find a way to hold on to our highly technological suburban lives, and yet still–” (here he sets his right hand, palm open upward, on the table) “–and yet still stay in touch with nature. But nobody wants to say that the cause of this,” raising the left hand, “is the death of that,” raising the right. “Or at least it’s the death of segments of it.”

Above all, Lopez’s strong reaction seems based in his awareness that many of us tend to unquestioningly accept what we see on television and in films. Because most people are denied the globe-hopping close contact with nature that Lopez has been fortunate to experience, our ideas of that world are formed by secondhand means, be they accurate depictions or not.

“It’s analogous to the problem in nature photography today,” he elaborates, “in that you can no longer trust anything you see photographed in a magazine. You take an animal and photograph it at the zoo, then you take a landscape and photograph it over here, and you just glue them together–whether the animal ever lived in that landscape or whether it behaved like that, we don’t know anymore.”

Pausing again, he sips thoughtfully at his cup.

“You know, no one can figure all this stuff out for themselves–that’s why we have neighbors,” he says. “But in a country such as ours we are made to feel isolated. That’s the only way that consumerism will work–to split everybody up, and to make sure that nobody shares, either things or ideas. We’re each sitting alone in the theater, separate from one another, consuming puerile fantasy.”

“But if you have a neighbor, you can ask them what they thought, and they might say, ‘Well, you know, I’ve been to Egypt and I’m familiar with the history of ideas in France at the time Balzac was writing, and I can offer these insights.’ So in that way, everyone can pool what they know, and then turn to the charlatan and say, ‘We don’t want you in here. You can’t come in here again. You are a danger to our children.'”

“As far as Passion in the Desert goes, I’d prefer that we never have to explain this film to a child, to explain what’s wrong with it, to explain how it cheats us of nature’s true beauty. I’d prefer,” he concludes, the hint of a chuckle returning, “that it just dried up and drifted away.”