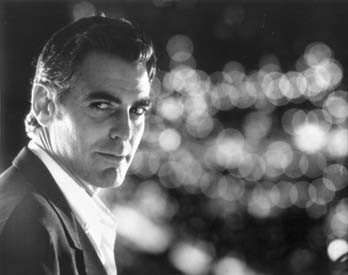 Chin up: George Clooney comes face to face with love in ‘Out of Sight.’

Novelist/screenwriter Amy Ephron on Jennifer Lopez’s ‘Out of Sight’

David Templeton takes interesting people to interesting movies in his ongoing quest for the ultimate post-film conversation. This time out, he meets author/screenwriter Amy Ephron to check out the outlandish crime-thriller Out of Sight.

LET’S DO THIS again some time,” suggests Amy Ephron, shaking hands as we part ways on a San Francisco street corner–across from the theater where we’ve just seen the new George Clooney film Out of Sight.

“But next time,” she emphasizes, “we’ll pick a better movie.”

Born and raised in Hollywood, Ephron is from a whole family of successful authors and screenwriters that includes her late parents, Henry and Phoebe (There’s No Business Like Show Business, Daddy Long Legs) and her sister, writer-director Nora Ephron (When Harry Met Sally, Sleepless in Seattle). Amy–for years a respected Hollywood production executive–has taken up the family business in recent years, writing numerous screenplays and even landing a much- discussed novel on the New York Times bestseller list.

Now at the tail end of a multicity book tour, Amy is currently visiting Northern California to promote the paperback release of that book, the celebrated A Cup of Tea. Like Frances Hodgson Burnett’s classic A Little Princess–which Ephron adapted for the screen in 1995’s award-winning film version–A Cup of Tea takes place in New York during World War I and explores similar themes of class distinction and prejudice.

The tale of a privileged woman whose destiny takes a nasty turn after she impulsively invites a penniless woman home for a cup of tea, the book has been optioned for the big screen by none other than legendary producer Jerry Bruckheimer and his wife, Linda. Bruckheimer–the force behind such explosive entertainment as Armageddon, The Rock, and Top Gun— seems an off-the-wall match for this quiet little story that takes place mainly in drawing rooms and hat shops. Thankfully, Linda–who read the book and loved it–will be handling the hands-on producing chores.

“We’ll see what they do with it,” Ephron grins. “It’s going to be fascinating.”

Bruckheimer, in fact, is one reason we chose to see Out of Sight–an outlandish yarn about a charming bank robber (Clooney) and a feisty U.S. marshal (Jennifer Lopez) who fall in love while trapped together in the trunk of a getaway car. The movie– directed by Steven Soderbergh–was produced by Bruckheimer.

I GUESS MEN really like Jennifer Lopez, huh?” Ephron quizzes me. “Men think she’s pretty hot?” We’re sipping Turkish coffee at a small cafe down the street, having left so quickly after the movie was over that, even as we settle into our seats here, the credits may still be rolling back at the theater.

“I’d have to agree with those men,” I reply.

“I don’t think her character made any sense,” Ephron says. “But then nothing in this film made sense. Some of the direction is so good, though–with those neat little instant-freeze frames right in the middle of action, and the way the plot started in the middle, skipped back to the beginning, and then worked its way back to the middle and on into the whole shoot-out thing at the end …”

“With Lopez waiting outside with her loaded gun and her lip gloss,” I interject.

“Right! Well, that’s another thing that doesn’t make sense,” Ephron laughs. “But some of it was so clever that every once in a while I was fooled into thinking I was watching a good movie. It just goes to show what a good director can do with a not-so-great script.

“So what did you think?” she wants to know. “Aside from Jennifer Lopez.”

“I enjoyed the impulsiveness of the love story,” I admit. “That this U.S. marshal, who by a weird, accidental twist of fate ends up in a trunk with an escaped convict, would be so compelled to pursue him– professionally and romantically–was kind of fun. Not unlike the impulsiveness of the woman in A Cup of Tea,” I point out, “who gives in to the impulse to invite this stranger home to tea, and later regrets it.”

“Well,” Ephron mulls this over, cradling her coffee cup. “In my book she was compelled to do what she did, as opposed to merely being impulsive. There’s a difference. When you are compelled, it is as if you have no choice, but when Jennifer Lopez decides to sleep with George Clooney, she’s being impulsive–almost psychotic, actually. What am I saying, ‘almost’? It was completely psychotic.”

“So, the bank robber and the marshal think they can see the end of their story?” I wonder.

“Sure,” Ephron nods. “They probably think they’ll end up in Mexico together, or something. But we, the audience, can see the end of the story coming, too–and we know it’s never going to turn out like that.”

“But with another little accident of fate couldn’t Mexico be possible?” I argue.

“In fiction anything is possible,” Ephron says. “In real life … well, in real life a lot is possible, too. It’s that ingrained belief in fairy tales. I think we all believe that just around the corner–maybe this corner, maybe that corner–something might be waiting to happen, something that might change our life. That the next five minutes could end up defining our entire existence.

“And you know what?” Amy Ephron smiles. “Sometimes that’s exactly what happens.”