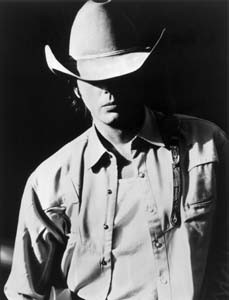 New releases by and about country singer Dwight Yoakam

MUSIC CRITICS and feature writers across the land are tugging their forelocks over country crooner Dwight Yoakam, trying to reconcile his burgeoning Hollywood career with his status as one of country music’s most enduring and innovative talents.

Breathless and agitated, they pose the same question over and over again: What does it all mean?

With his recently released A Long Way Home, singer and songwriter Yoakam–who rode into the spotlight during the mid-’80s on the leading edge of the genre’s neo-traditionalist movement and helped spark the decade’s country revival–counters with a succinct answer: Nothing.

Those seeking proof need only consult “Traveler’s Lantern,” a bluegrass tune so pure that, by the second verse, it conjures images of mountain folk drinking moonshine while their barefoot children dance with chickens around a campfire.

So much for Yoakam going Hollywood.

If anything, A Long Way Home is a metaphorical journey about embracing roots, not abandoning them. On his last collection of originals, 1995’s Gone (followed by a live album and a set of covers), Yoakam shunned his honky-tonk pedigree, exploring a more mongrel sound and incorporating a broad tapestry of influences.

Interesting, yes, but hardly memorable. And a subsequent release of cover tunes that ventured into swing was downright forgettable. But now Yoakam is back, and once again he’s packing a punch.

While the masterful songwriting of A Long Way Home evokes such Yoakam classics as This Time and If There Was a Way, it also explores fresh sonic territory, cultivating a working balance between tradition and experimentation.

Ultimately, however, Yoakam is at his finest when twanging his way through such hardcore honky- tonkers as “These Arms” and “That’s Okay” or balladeering on the haunting “I’ll Just Take These.”

While the arrangements on A Long Way Home are spare, the sound is fat and crystalline. And Yoakam’s voice has perhaps never sounded better.

In a musical genre increasingly populated by sellouts and poppinjays, it’s reassuring to know that there’s an “actor” out there capable of injecting passion and ingenuity into popular country music.
CHRIS WEIR

Various Artists
Will Sing for Food: The Songs of Dwight Yoakam (Little Dog/Mercury)

IT’S FITTING that this collection of 14 Dwight Yoakam songs, performed by other artists, serves as a benefit for the homeless, given the populist sentiment of his music. Conceived by Yoakam and his guitarist- producer Pete Anderson (who serves as executive producer), this project brings together an impressive variety of roots Americana musicians, including mandolinist Tim O’Brien, country vocalist Bonnie Bramlett, the Blazers, and mystical singer/songwriter Gillian Welch with David Rawlings.

Their interpretations shine new light on such Yoakam-penned classics as “This Time,” “Miner’s Prayer,” and “I Sang Dixie,” presenting further evidence for his status as a country music original in the tradition of Hank Williams, Johnny Cash, Merle Haggard, and Willie Nelson.
TERRY HANSEN