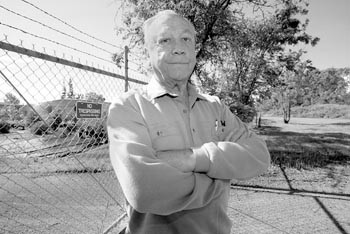 Something rotten in Santa Rosa: Bill Carpentier, director of the Pacific Coast Air Museum at the Sonoma County Airport, says the Army’s disposal procedures at the facility left lots to be desired.

Blasts from the Past

Fifty years ago, the U.S. Army buried chemical weapons at the Sonoma County Airport. Is there still danger?

SOMETIMES the past comes back to haunt us. In the fall of 1982, workers were overcome by a mysterious white gas, rising ghostlike from a ditch they were digging at the Sonoma County Airport. For a few weeks, the gaseous specter remained unexplained. Then a backhoe operator who was working at the airport in the same area–and who happened to be a bottle collector–saw a glint in a ditch he was about to cover with dirt. He stopped his equipment and got out to pick up the object he thought might be an old bottle.

The glass object looked like a foot-long test tube, about an inch thick and sealed at both ends. The strange vial passed hands a few times before reaching the office of airport manager David Andrews. It took Andrews 18 months of investigation to figure out what he had in his office, and he sent the final lab results to the Pentagon.

Only then did someone from the Army show up.

“It was mustard gas,” says Andrews, referring to the glass ampoule of 5 percent lewisite solution left in the ground from the World War II years. The act of digging had broken a whole cache of the ampoules and released a poisonous reminder of that distant war.

Lewisite, a chemical weapon used in World War II, was designed to cling to human skin and blister it. If you breath the stuff in, your lungs become a real mess. When the Sonoma County Airport was used as a fighter-training base, soldiers were instructed in identifying the smell of common chemical weapons. These ampoules were used for the scent-identification training.

What were those ampoules doing in the ground almost 40 years after the war?

Until around 1950, disposing of chemical warfare materials by burial was considered an acceptable practice. When the war was over, military personnel simply dug a hole, dumped the stuff in, and covered it up. This practice was accepted at military bases all over the country and in U.S. territories.

Once the burial was complete, says Louise Dycen, a U.S. Army representative in Maryland, “they poured decontamination solution on top.”

What kind of decontamination solution? She can’t say.

The Army and all other U.S. armed forces have been required to clean up the messes left from the war years under the terms of the Chemical Weapons Convention, an international treaty signed by the United States in 1993 and ratified by Congress in 1997. The treaty requires the military to destroy all the chemical weapons and chemical weapon production facilities that still exist in this country. The idea, according to a government publication, is to create a greater sense of global stability.

But it’s an open question how well the military has carried out those obligations.

Sonoma County residents are not in any immediate danger from buried chemical weapons, according to Andrews. “I don’t think there is any way to make sure it is all gone, but is there any appreciable amount? No.”

THERE ARE 200 sites in 38 states, in the District of Columbia, and on Johnson Island in the Pacific Ocean, where U.S. military chemical-weapon matériel is buried. These buried weapons are designated as nonstockpile, as opposed to weapons in storage at military bases.

In California, there are three other sites, besides Santa Rosa, where weapons were sent for cleanup. Fort Ord, nine miles north of Monterey, was the dump site for chemical weapons solutions, unexploded ordnance, heavy metals, and residues from explosives. Mt. Shasta, in the Siskiyous, had been the test site for 100-pound M47A2 butane bombs, and an unexploded 100-pound bomb was found there a few years ago, still full of butane. Finally, Edwards Air Force Base in Kern County was used to test air-dropped chemical bombs. In 1992, three bombs were found at the site with fuses still intact. They were detonated.

Nonstockpile chemical weapons can be a bit problematic for the Army, since military personnel can’t always remember precisely whether or where they buried them. In Sonoma County 20 years ago, for instance, there was some uncertainty about where exactly the ampoules of chemical-weapon solutions were buried. There is still some uncertainty about whether there are more under the ground. So much toxic material was dumped on the land back then, it might be difficult to keep track.

Bill Carpentier, director of the Pacific Coast Air Museum at the Sonoma County Airport, is a historian and a veteran of World War II who recalls how toxic disposal was carried out back then. “Fifty years ago nobody knew when you dumped a can of gas on the ground that anything was going to happen other than emptying the container,” Carpentier says.

Once, during the closing of a World War II U.S. military operation, Carpentier watched while a soldier, who had orders to dispose of a bunch of Harley-Davidson motorcycles, simply pushed them over a cliff into the ocean. Airplane mechanics, Carpentier says, would empty oil and fuel into the ground.

Carpentier explains that the Army was not alone in this kind of environmentally insensitive behavior–these were not enlightened times, and there were no state or federal environmental protection regulations back then. The grounds around the airport–almost 1,600 acres–soaked up whatever oil and fuel was routinely poured on them. The land bore the additional insult of being covered in paint, part of an attempt to make it look as if crops were growing there to disguise the location of the fighter-training base.

When the chemical-solution ampoules were bulldozed into the ground after the war, it was business as unusual, according to Carpentier. But he insists that all the ampoules have since been cleaned up.

ARMY RECORDS show that the ampoules were cleaned up in 1983. But when more were found in 1985, this time in jars the size of baby food containers, the site was cleaned up yet again by the Army Corps of Engineers, with assistance from the Army Toxic and Hazardous Materials Agency. There was an additional assessment of the site in 1992, and they’re still wondering what might be under the ground in the places they didn’t check.

Because there is no technology that can locate glass below the ground, the possibility that more ampoules may exist at the site has prompted the Army Corps of Engineers to advise the county against excavating the area–a site bordered by state, county, residential, and commercial property. A 1996 survey and analysis report by the Army notes that excavations are required and will be performed by the Army Corps of Engineers before the county does any construction work in the area.

As long as the county does no development at the airport, there is no danger to public health from the buried ampoules. Andrews is not aware of any local construction projects in the works. However, the growth of development in many parts of the country is digging up the past and its sleeping dangers.

According to Ron Baker of the California Department of Toxins, the Army’s nonstockpile sites are not the biggest cause of war-related environmental and public health problems in the state. The real trouble is sitting under the dirt at 183 sites throughout the state–unexploded bombs at testing sites for defense manufacturers.

“A lot of it has to do with urban growth,” says Baker. “Most defense contractors were located way out in the boondocks. But the boondocks are becoming tomorrow’s cities.” Baker explained that “duds,” the bombs that don’t go off during tests, sit in the ground and can explode later when someone wants to develop the property.

A housing project in Benicia has been delayed five years because the property is adjacent to a former munitions factory and the ground is full of bombs. Construction has been halted on several occasions so bombs could be taken care of by experts. It’s uncertain whether the homes will ever be completed.

One large defense contractor in Southern California wants to turn part of its property into a housing development, Baker explains, but there is a real danger there. Heavy-metal poisoning in the ground may contaminate home gardens.

And if a homeowner wants a pool, he adds, there’s a good chance a backhoe could unearth and detonate a stray bomb left underground on the site. This same defense contracting corporation has tear gas and mustard gas buried on its land.

While the military is obliged by international treaty to dispose of its buried chemical weapons and clean up the environmental damage done to test sites, private defense contractors are not. Bombs being shipped to Vietnam from a private defense contractor during that war once got derailed near the town of Roseville, according to a government source in Sacramento. The shipping car turned over, and many bombs exploded. Others were buried, intact, by the pressure of the explosion.

Those bombs are still being found, even after the site was supposedly cleaned of all bombs.

Apparently, locating buried bombs is not an exact science yet. Contractors who made and sold chemical weapons did not keep records of where they left duds or explosive castoffs. The makers of these weapons are evidently not subject to the provisions of the same treaty under which the military is obliged to clean up the wastes of wartime.

AT THE PACIFIC Coast Air Museum, Carpentier shows a visitor the Santa Rosa Army Airfield map, painted beautifully in camouflage colors, as it was in the 1940s. The soil back then, masked by a painted-on uniform, served the war effort simply by being permeable and, like a good soldier, stoically taking whatever was dished out.

“At the end of 1945, all of us had one goal–to get the hell out of the military and go home,” says Carpentier. That’s when chemical weapons were buried and considered disposed of. “The environmental problems only surfaced about 30 years ago,” Carpentier says. “Guys like me who are hunters and fishermen noticed there was a depletion in game.”

In the small museum building, itself relic of World War II, Carpentier points to the ceiling, hung with models of World War II fighter planes. Photos of local pilots are posted with histories of successful and unsuccessful missions. In a glass case is a headless uniform wearing a gas mask.

Carpentier, like others who served in World War II, is ready to pick a fight with anyone who would disparage the military. But while he still proudly defends his country of half a century ago, he recognizes that mistakes were made in disposing of toxic materials.

“I wish that there hadn’t been a war . . . that gave rise to this pollution,” says Carpentier.