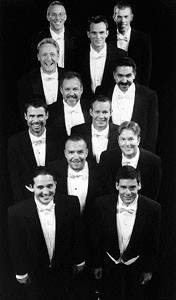 When John Tavener first heard the recording of Chanticleer’s newly released Lamentations and Praises (Teldec)–the Greek and Russian Orthodox-influenced liturgical drama commissioned from Tavener by the San Francisco-based all-male choir–the acclaimed British composer had an immediate, visceral reaction. “I was staggered by it,” he told Gramophone magazine.

The astoundingly moving work, recorded at Skywalker Ranch in San Rafael the week before the terrorist attacks on New York and Washington, has struck a chord with those seeking solace in the wake of the madness that has engulfed the world in recent months. Tavener’s ambitious composition is split into 13 ikons, or musical segments, describing Jesus’ descent from the cross to his resurrection from Hades. In addition to Chanticleer’s powerful harmonies and glorious performances by the Handel and Haydn Society of Boston, Tavener has informed his work with an unusual array of instrumentation that combines male voices (ranging from countertenors to a remarkable low C-sharp bass), flute, bass trombone, string quintet, taped material, and a crashing percussion section that includes a timpani, Byzantine monastery bell, a booming Tibetan temple bowl, an oversized tam-tam, tubular bells, and simantron (a large wooden sounding-board struck with a hammer).

In preparation for the recording, Chanticleer, longtime champions of early music, studied for a month with a Greek Orthodox psalmista to learn the subtle ornaments and microtones of this non-Western vocal tradition, usually reserved for the Greek or Slavonic churches.

The meditative CD has left critics dazzled by Chanticleer’s “blissful,” “all-consuming” singing while conjecturing that this may be Tavener’s greatest work yet. “A masterpiece or a personal extravaganza?” wondered Gramophone critic Mary Berry. “It is for you, the listener, to decide.”

North Bay fans of Chanticleer will get a rare opportunity to savor this work in concert when the 12-man vocal powerhouse performs on May 16 at St. Vincent de Paul Church in Petaluma.

Named after the “clear-singing” rooster in Geoffrey Chaucer’s Canterbury Tales, Chanticleer has a repertoire ranging from Renaissance vocal to Mexican Baroque to jazz. Now in its 24th season, this Grammy-winning vocal orchestra is no stranger to acclaim. Their 1999 album, Colors of Love, won the Grammy Award for Best Small Ensemble Performance (with or without a conductor) and the Contemporary A Capella Recording Award for Best Classical Album. Last year’s stunning Magnificat, a disc of early music devoted to the Virgin Mary, climbed to number four on Billboard’s classical chart. The ensemble performs over 100 concerts a year throughout the world, appearing regularly in New York, Boston, Los Angeles, Washington, D.C., Chicago, Toronto, Tokyo, and Paris, as well as in their home base of San Francisco.

At a time when the ensemble’s Warner-affiliated label is dropping other major names from its embattled roster, Chanticleer has signed a new four-year contract, based in part on the continued sales of its immensely popular Christmas recordings. One reason for the ensemble’s huge popularity is its ability to rise above religious sectarianism and deliver a distinctly spiritual sound. “It’s spiritual in the ‘essence of life’ sense,” Chanticleer countertenor and music director Joseph Jennings told the Bohemian two years ago. “And even though so many of our performances are in a church, especially the Christmas program, and even though the music we do is essentially religious in nature, it’s not music of any particular denomination, it’s not done in a religious context. So people have the freedom to let the music speak to them without all the dogmatic trappings of the church, as it were.”