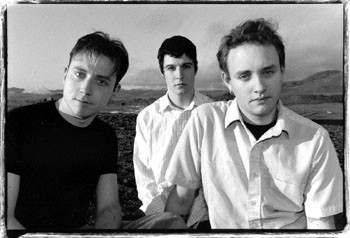 The Power Of Three: The Velvet Teen kicks off a tour to support their new album. L-R: Logan Whitehurst, Judah Nagler, Josh Staples.

A Special Gift to You

If memory serves, the first time I saw the Velvet Teen was in 2000 at a sparsely attended afternoon pizza party at the now defunct Inn of the Beginning in Cotati, back when the band was still “that new thing Judah’s doing.” Last Friday, on the final night of their first coast-to-coast tour, they played in Petaluma to a packed Phoenix Theatre with fans ranging from the typical sneaker-clad teenagers to adults sprouting gray hair.

But even if I lived in Alaska and had never seen the Velvet Teen to begin with, I’d still love them. Such mesmerizingly sincere and unabashedly gorgeous songs are impossible to keep from getting under your skin, and at a time when indie rock is dotted with staid and pretentious bands, music that you can so effortlessly attach yourself to is a rare treat. When a band puts on a good show, it makes you float; when the Velvet Teen put on a good show, they make you melt. And I have melted, I have, every time I’ve seen them.

The Velvet Teen’s escalating recognition is most immediately owing to the release of their debut full-length album, Out of the Fierce Parade, released in March. An opening slot with Death Cab for Cutie on the first night of this year’s prestigious Noise Pop festival in San Francisco only added to the buzz. The bulk of that momentum, however, is passionate word-of-mouth fueled by frantically downloaded mp3s and spellbinding live shows; the band’s recent tour recruited not only new fans, but also allowed those already familiar with the recorded material their first glimpse of live Velvet Teen.

“I’ve been on a few tours with different bands, and this is the only tour I’ve been on where there was at least one person there that knew our songs and was there to see us,” said Josh Staples, the group’s bassist, before Friday’s show. “At one show, a couple of people drove, like, six hours, from Iowa to Nebraska. Out of 30 shows, there were only a couple ones that were kinda lame, and there were still people that were there to see us–otherwise, they could have been way lamer, if there was nobody there.”

All three members have been playing in Sonoma County bands for years: Singer-songwriter Judah Nagler joined the ska outfit Tin Circus in high school before playing bass in the arty, geek-rock Little Tin Frog. Nagler and Little Tin Frog drummer Logan Whitehurst began to write very nongeek-rock songs together as a secret side project; when Little Tin Frog broke up, the side project became the Secret Band. Josh Staples, who played in the Conspiracy, Edaline, and the Wunder Years, came on as bass player, and the trio became the Velvet Teen, previously the name of Nagler’s electronica-infused side project.

A prolific songwriter, Nagler’s talent and age (all of 21) make him a bit the prodigy. “Music is all I’ve known my whole life,” he says. “If I go a week without writing a song, I feel like I’m all out of place.”

Drummer Whitehurst also stays busy with his own solo project, Logan Whitehurst and the Junior Science Club, whose They Might Be Giants-inspired silliness could only be further from the Velvet Teen’s material if it were a hardcore band. Whitehurst also did the etchings for Out of the Fierce Parade‘s cover; all three band members are graphic designers, making them the only band I know who face a dilemma over which one designs the next flyer.

After the self-released EP The Great Beast February and the Immortality 7″ on Petaluma’s Pandacide Records, the Velvet Teen went to Seattle for a week to record Out of the Fierce Parade with Death Cab for Cutie’s Chris Walla. That the first pressing of the album sold out and left some stores temporarily out of the CD proves how listeners have taken to the band; on only their second week on the CMJ charts, Out of the Fierce Parade had already reached #82. But it was a random kid I spotted in Santa Barbara this past weekend proudly wearing a Velvet Teen T-shirt that proved that the band’s popularity is hardly a North Bay phenomenon anymore.

Instead of knitting their brows to create something completely original yet contrived, the Velvet Teen are not afraid of allowing their songs to sound pretty, embracing the traditional structure of a pop song instead of sparring with it. Their respect for choruses, bridges, hooks, and vocal harmonies is such that they elevate three-minute songs to the holy stratosphere where Lennon/McCartney and Goffin/King compositions float in ethereal pop divinity, transcending the saccharine confines of lesser hands. Critics toss around references to Radiohead (falsetto vocals), Jeff Buckley (soaring ballads), and Smashing Pumpkins (flashes of big guitar), and while there is validity to all these comparisons, the Velvet Teen’s ability to stratify catchiness with profundity to create a sound very much their own defies such marginalization.

Out of the Fierce Parade is an excellent, powerfully beautiful album, produced and performed with a subtlety that galvanizes the strength of the melodies and the pensive nature of the lyrics. Nagler’s vocals have the restraint of a weeping angel, propelling songs that are sparse and lush at the same time. The album’s spot-on pacing weaves through the spine-tingling opening ballad, “A Special Gift to You,” to the upbeat rocker “Radiapathy,” to “Into the Open Air,” a gilded anthem that marks the centerpiece of the album and may be the most arresting rock and roll song ever written in 6/8 time. Out of the Fierce Parade is the most complete and exciting recording I’ve heard this year so far.

“They have this incredible dynamic where each song is the polar opposite of the previous track, and their live show brings it all together,” says Ezra Caraeff of Slowdance Records, the Velvet Teen’s Portland-based label, who first became aware of the group when a friend who had played a show with them was so blown away by their performance that he insisted Caraeff take a listen. “If they continue to relentlessly tour,” says Caraeff, “they will become a very well-received band. They have worked very, very hard–I’ve never met a band in my life who has been so organized and determined. Plus, when it comes down to it, they just really like to play music.”

The boys promised on their website to document the antics of their tour via on-the-road postings, and the resulting tour journal entries reveal not only their wit and creativity, but also Josh’s rampant love for the old-school video game Galaga. To keep fans abreast of the band’s travels, Nagler jerry-rigged a tracking device for their van, so that a big red dot flashed on a map on the website over their location.

With a short tour with the Gloria Record coming in mid May and a possible jaunt to Canada in June, the Velvet Teen will have no shortage of time to spend in their sweet-ass van, a mighty touring machine complete with a television, a dustbuster, and a temporarily broken speedometer. “We’ve put 30,000 miles on it in the past eight months, and it seems to be doing fine,” says Josh. And the Velvet Teen seems no worse for the wear either.

The Velvet Teen play a teens-only show May 11 in Palo Alto at the Mitchell Park Teen Center, and at Bottom of the Hill in San Francisco on May 17 with the Gloria Record.