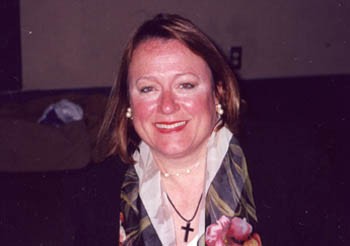 Power to the People: Catherine Austin Fitts has spent her career trying to bring economic independence to individuals.

On the Money Trail

Enron. Arthur Anderson. WorldCom. Global Crossing. Some of the biggest players in corporate America, and what do they have in common? They are all perpetrators of reporting fuzzy numbers as revenue to pump their stock prices. But in the realm of creative accounting run amok, one institution stands apart as the mother of all financial fraud–the Department of Housing and Urban Development.

Although HUD’s mission involves “spurring economic growth in distressed neighborhoods,” the reality is that HUD is an agency run and managed by the departments of Treasury and Justice, Lockheed Martin, JPMorgan Chase, Dyncorp, Harvard, AMS, Arthur Anderson, and others that use the agency for their own for-profit interests.

All this according to Catherine Austin Fitts, the self-described “cleaning lady” whose job it was to clean up financial messes such as the savings and loan scandal at HUD. Few people know more than Fitts about how the money works in Washington–and now that Enronitis is spreading, Fitts has found a willing audience for her insight on how complicated financial schemes get cracked and implemented at the highest corporate and governmental level. The software she has developed, if implemented, is poised to revolutionize the way communities and individuals use their money.

When Fitts left the Wall Street firm of Dillon Read and joined HUD in 1989 as Assistant Secretary of Housing, what she found was an agency awash in conflicts of interest and fraud that was subservient to the big-money people in the financial community.

Moreover, she discovered that HUD had never tracked its financial results on a location-specific basis, so each field office had no idea how the money worked in its jurisdiction. By putting together a crude place-based cash-flow map, she found that HUD’s business had been substantially distorted by the way the data had been presented. Her numbers proved that S&L and HUD fraud were perpetrated by the same networks, in the same places, and involved the same use of federal credit.

“In Washington, everyone was talking about the S&L and HUD scandals as if they were separate, but it was clear that place-based financial data would have told us what had happened, who had profited, and how to prevent it from happening again,” Fitts recalls. “It also became apparent that our investments in communities conflicted with the other federal, state, and local investments in that place.”

Fitts was fired by the Bush administration in 1990 after only 18 months on the job. She was told the day after she left that the preparation of place-based financial accounting and statements had also been terminated.

Out of work, Fitts decided to dedicate herself to the concept of helping communities finance themselves. Fitts founded a new company, Hamilton Securities Group, which in 1993 won a contract with HUD to manage its $500 billion portfolio.

After her discouraging experience in the employment of HUD, the things that gave Fitts the most hope were digital technology and the advent of the Internet, which were both becoming more and more accessible to the public. Hamilton’s contract with HUD provided an invaluable opportunity to draw from what Fitts describes as “the richest database in the world on how the money works in neighborhoods.”

When HUD decided to auction off a portfolio of defaulted mortgage loans, Hamilton introduced a proprietary place-based bidding software and an online database of information so that the portfolio could be bid upon in an open, competitive auction. With it, little guys were able to compete with big, publicly traded players for the first time.

The problem, she found, was that the model was too effective. In 1995, Fitts’ team auctioned $950 million worth of multifamily mortgages in the Southeast. It was estimated that by selling them the old-fashioned way the sale would bring $350 million, but thanks to the innovations implemented at Hamilton’s recommendations, the loans sold for $710 million and, according to Fitts, “took the world’s breath away.”

Although the sale hurt some big players, it helped taxpayers save $2 billion in defaulted loan sales. That accomplishment raised eyebrows and sent a loud message to HUD that all this time they had been dealing with low bidders.

One of the reasons Hamilton was called in to help with the sale is because HUD needed to raise its loan recovery rates in order to issue more mortgage insurance without congressional appropriations. Hamilton came in with its optimization software, blew away the market with wildly successful loan sales, brought HUD’s recovery rates up from 35 percent to 70 percent and 90 percent, and HUD was able to generate $2.2 billion in new revenue and new credit.

But the story didn’t end happily ever after. In 1997, HUD canceled Hamilton’s contract and the loan sales program while continuing to use the new recovery rate assumptions in order to get new credit originations. That is a clear case of, in Fitts’ words, “cooked books.”

And, Fitts notes, HUD is currently out of compliance with its own accounting rules. In 1999, under the direction of HUD Secretary Andrew Cuomo, HUD’s Inspector General refused to certify its own financial statements as required by law, while admitting that $59 billion somehow disappeared. The explanation given was accounting systems failure, and the matter was dropped without investigation.

“In 2000 I visited with a senior staff assistant to [Senator] Kit Bond, the chairman of one of the appropriations committees for HUD,” remembers Fitts. “I asked her what she thought was going on at HUD, and she said, ‘HUD is being run as a criminal enterprise.’ Then Bond, the committee, and my congressional delegation, all Republicans, all voted a $1.7 billion increase in HUD’s appropriation.”

Starting in 1994, Hamilton Securities Group began building an easy-to-operate computer software system to track the money flows in any given region. The program, Community Wizard, provided the kind of transparency needed to expose cooked books. Former Hamilton employee Carolyn Betts remembers the power of Community Wizard, even in its infancy.

“It was in the beta stage, so it was not complete, but with each piece of information it became more and more powerful,” recalls Betts. “The HUD field office people went absolutely crazy when they saw it. You could go in with a pointer on a map and get to information on expenditures by each HUD program. It was a pretty beautiful program and would have become unbelievably powerful.”

To imagine the Wizard at work, Betts says, picture a place-based website with modules. For each place, you could pull up a map, like on Mapquest, and see information such as the socioeconomic characteristics of the residents or the amounts of revenue generated by private companies.

The developers at Hamilton got geocoded information from every government agency and private contractor they could, including information on all payments made by the federal government to contractors. Depending on which side of the law you sit, Community Wizard could be either a godsend or a threat.

In the fall of 1996, Hamilton became the target of nightmarish covert operations, smear campaigns, harassment, and criminal investigations. The Community Wizard technology was ultimately destroyed in 1998 when Department of Justice agents stormed in and wrecked Hamilton’s office. Fitts suspects that Wizard held secrets which may have revealed that some U.S.-guaranteed mortgage securities were fraudulently issued and were illegally draining HUD’s reserves.

Thanks to Hamilton’s innovations, HUD was able to save taxpayers over $2 billion through the defaulted loan sales. In spite of that, the agency refuses to pay Hamilton over $2.5 million worth of outstanding invoices. To top it off, John Ervin, a HUD contract servicer, brought a qui tam (whistleblower) suit against Fitts that accused her of committing fraud against HUD to the tune of $3.8 million.

So the cleaning lady of fraud is now being sued for allegedly committing fraud against the most fraud-ridden agency in the U.S. government. Is this a great country or what?

Fitts has continued to develop groundbreaking technologies to separate the U.S. government from the tentacles of corporate America and give economic control back to the people. Her latest is called a Solari.

“A Solari is an investment advisor and databank for a neighborhood of 10,000 people or less that promotes transparency and literacy about how the time and money works, while raising and reengineering capital within that place,” Fitts explains.

The Solari Action Network is an investment advisory company founded by Fitts in 1998, and its launch date is set three months after the feds pay Fitts the monies owed under Hamilton contracts. Once launched, the first thing needed is a Community Wizard-like technology to give average people the confidence to approach complex financial situations.

The second part of a Solari is the creation of a trust structure for shareholders, an investment pool, if you will. This plan includes nonvalue, voting “A” shares owned by a self-perpetuating group of entrepreneurial neighbors. The nonvoting “B” shares have monetary value and are sold to whomever “A” shareholders determine. First they are sold to the community, but ultimately they can be traded on the stock market. The “A” shareholders only make money on “B” shares, which encourages all neighbors to optimize total equity in the place.

Here is a theoretical example. If the town of Forestville had a Solari Network, its “A” shareholders could, by using Community Wizard, determine that residents send $2 million to HUD, which takes $1 million for “overhead” and plans to use the other $1 million to renovate four housing units in Mirabel Heights. If the shareholders estimate the actual cost of construction to be $200,000 if financed locally, they can tell Washington to cancel the HUD expenditure and save residents $1.8 million in taxes. This would be a sophisticated way of telling Washington to shove it. Moreover, it’s a method for residents to distance themselves from a “criminal enterprise.”

“If HUD is spending money outside of the Constitution and failing to comply with the law, it would be improper to give them money because by doing so, we would be encouraging criminal activity,” says Fitts.

Fitts envisions Community Wizard being reinvented on a decentralized basis, one for each neighborhood. She has already agreed to help one community in California build its own version through a website.

“I will reinvest the proceeds from litigation judgments or settlements, and/or capitalizing Solari as part of a global settlement, into venture capital that will fund as many locally developed Community Wizards as possible,” Fitts promises. “My hope is that online collaboration will lead to a much more dynamic network of databases and tools to take control of the money flow.”

Catherine Austin Fitts can be reached at [email protected]. Fitts’ writings can be read at www.solari.com.