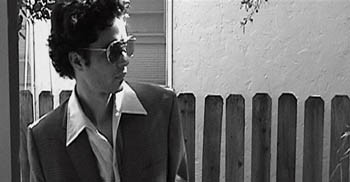 ‘Lance Sterling: Off the Case’

Darwin Meiners’ Trick Knee Productions acts up with ‘Lance Sterling: Off the Case’

While some schmuck of a studio was ponying up millions for Eddie Murphy to make a hackneyed blob of drivel like The Adventures of Pluto Nash, Darwin Meiners and a cast and crew of 13 were scoping out spots in Santa Rosa. They were on the hunt for readymade sets for a movie whose budget was so low that it was more of a subbudget. Pluto Nash: millions. Lance Sterling: tens–if you don’t factor in Meiner’s “production equipment” (i.e., a digital camera and an iMac). And here’s the obvious yet ironic part: Guess which movie doesn’t suck?

The good news is that this kind of thing is happening all over the world. The better news is that there are more places than ever to see the products of such renegade filmmaking. Which leads us to the upcoming big-screen world premiere on Sept. 7 of Lance Sterling: Off the Case. Granted, the screening is at the Santa Rosa Junior College and not Grauman’s Chinese Theatre, but that does not matter to Meiners, whose Trick Knee Productions (also an indie record label) has been the motor behind Lance Sterling, the detective-movie project that wouldn’t die.

Francis Ford Coppola took 10 months to shoot the two-and-a-half-hour Apocalypse Now, but Meiners beat him flat out, taking a decade to make a one-hour movie. About a dorky detective. Filmed not in the Philippines but in Santa Rosa. There are no helicopters, but there are zombies.

“One of the reasons it took so long was I put so much of myself into it,” says Meiners, 31, who wrote, directed, edited, and played the title role in Lance Sterling. “I had the computer, I had the camera, I had the story, and then I was in it. It was just too much.”

Still, unlike American Movie‘s obsessive but misdirected Mark Borchardt, Meiners kept a loose atmosphere on the set–wherever it happened to be. “For the most part, we used whatever was available. The last scene, we have a big fight in a pool. We just used an apartment-complex-without-their-permission kind of thing. We got in and out real quick.”

To Meiners, the beauty of having a slender budget meant that there was no choice but for extreme creativity. “There’s a scene at the end where we get captured and the bad guy’s going to kill us, but he can’t just kill us, he’s got to put us in some kind of trap. He’s going to turn on the poisonous gas. So like, how are we going to do poisonous gas? This old building [where we were shooting] had this shitty air conditioner . . . so, like, there it is, there’s the poisonous gas.

“So when he flips [the switch], it goes bum-bum-bum–it sounds like he’s pumping something in. And that’s kind of funnier than if we had some kind of special effect. I mean, the first Star Wars was amazing, and the new one sucked.”

The birth of decidedly less-than-suave detective Lance Sterling came about, as most movies do, from another movie. “I saw Dead Men Don’t Wear Plaid by Steve Martin. I though it was the funniest thing I’d seen in a long, long time. It gave me an idea, this whole spoof thing, being into film noir and that whole era of movies.” Hence Lance Sterling’s black-and-white footage and intentionally quasi-timeless look, with a soundtrack that culls songs from Booker T. & the MG’s to Hall and Oates (who are, oddly enough, kind of central to the story).

If you’re gonna make a detective spoof, you might as well hit all of the traditional filmmaking conventions while you’re at it. “The plot is a guy whose lifelong ambition is to catch this other guy. In these old Lee Marvin and James Bond movies, that’s always what happens. We’ve got the boss who’s trying to get Lance off the case, we’ve got the love scene, we’ve got the zombie scene, the fight scene–it’s terribly ridiculous. This is definitely fun-stupid or stupid fun–you could just decide for yourself.”

Possibly the biggest obstacle–for most of the 10 years–was the problem of locating equipment. “Every time I get interested in making movies, technology changes. I didn’t have any money, I couldn’t buy a camera, so I was trying to use other peoples’ cameras. I had a friend who was taking a film class, we had access to the Junior College film stuff, and then that class got finished and we didn’t have a camera anymore. Then I was going out with this girl, and she had a camera. And then we broke up, so I didn’t have a camera anymore.

“So I bought a camera, and everything was going great. And I bought a computer and I plugged it in, and I was looking at it and I thought, ‘God, going from analog to digital looks terrible.’ So I went out and got a digital camera, I went and got a new computer. Here we are, four computers later, and probably five or six cameras later, and we just finished the movie.”

As for all of that initial effort with all of those different cameras, it didn’t go to complete waste. “In the end credits, I put original footage from 10 years ago. There’s people in it that look thinner and have longer hair. It shows me smoking a cigarette–a clove cigarette! Instead of faking that whole serious thing, we were serious, and it was so, so bad. Jesus!”

Meiners (who works at an insurance company when he’s not doing Trick Knee-related stuff) assures that it would be a blast to be able to make movies full-time, but he retains a good grasp on the reality of the day-job world and the knowledge that productive people are happy people. “It’s fun to do on the side. People are always telling me I do too much and I need to take a day to settle down, but I’m always busy, I’m always having a good time. Maybe if it was my job I’d have a lot of spare time and I wouldn’t be having as much fun. It makes you feel like you have a meaning.

“That’s kind of what I do. I get projects and I finish them–even if it takes 10 years, for God’s sake. I’ve gotta love it–it’s costing me a shitload of money, all these computers.”

Obsolete computers aside, one advantage to the rapid improvements in digital technology is that now anyone who wants to make a movie can. And making them they are.

“Two years ago,” Meiners says, “I was looking at film festivals, and no one would take digital media. And these festivals are allowing people with digital media in there now. The quality is so good that you can’t really put your nose up to it anymore. It’s just a different canvas. Obviously, it would be much cooler to have a whole analog rig, but it’s just not realistic. You can buy a camera for a thousand bucks, you can buy an iMac for a thousand bucks–you can make a pretty good movie for about 2,500 bucks.”

To some, that may still seem a steep price tag for what might be considered a potentially demanding and stressful hobby. “Making decisions, having ideas, and having them fail and then work–that whole roller-coaster ride is the only reason I do it,” says Meiners. “And it gives me a reason to hang out with some friends who I don’t see that often. It kept me in touch with these people for 10 years.”

Which is as good a reason as any for making a movie.

‘Lance Sterling: Off the Case’ premieres on Saturday, Sept. 7, at 9pm, at the Santa Rosa Junior College’s Newman Auditorium, 1501 Mendocino Ave., Santa Rosa. Tickets are very limited. The Velvet Teen will be debuting the video for “Radiapathy,” Deep Blue String will be releasing their new CD, ‘Start,’ on Trick Knee Productions. $5 donation. [email protected] or 707.480.9077.