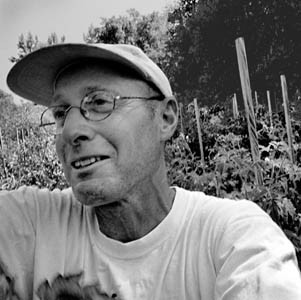 A Slave to the Seasons: Neil Dunaetz, whose produce once graced the tables of Chicago’s Ritz Carlton, lets his melons grow large while he remains small.

For Neil Dunaetz, growing the best produce is rewarding but bittersweet

Neil Dunaetz is not particularly good at social niceties. He’s like one of those people who treat the greeting “Hi, how are you?” as a question. It’s not that he’s mean. If anything, he’s quite kind. But of course, being nice and being adept at niceties are two very different–and often diametrically opposed–conditions.

So he’s standing here before me, the passion in his voice, his eyes, and his very stance radiating forth, and he’s telling me that he and I and everyone around here have blood on our hands. Oh, perhaps the exact words he’s using aren’t so dramatic. But the voice and eyes and stance make up for that.

Along with the metaphorical blood, Dunaetz has a cantaloupe in his hands. He picked it from his farm just hours ago. It’s ripe and fragrant, organically grown and pure. He cuts into it, and perhaps that juice running down his fingers is good enough to wash away the bloody sins.

He finishes slicing, wipes the blade on his shirt, and hands the bowl to me. We’re sitting on his one-acre farm in Sebastopol, which seems to hold about six acres worth of produce. Tomatoes, green beans, and other vegetables are growing high up on trellises. There’s hardly any room to walk between the rows of corn. Melons cover the ground. Cosmos and other flowers that lure beneficial bugs dot the landscape. Everywhere you look, the land is teaming with life, with color–with food.

Upon seeing the small farm, it’s hard to believe that all that produce, growing in such compact conditions, could possibly receive enough sunlight and nutrients and care to live, let alone thrive. But I had tasted it before. So I know that the exceptional flavor of this cantaloupe is no aberration. Satisfied customers at farmers markets have been know, to stand in front of Dunaetz’s table directing other buyers to his stand.

Sarah Stegner, the dining room chef at the Ritz-Carlton in Chicago, still remembers Dunaetz. “That man grew the best tomatoes I’ve ever tasted in my life,” she blurts out as soon as I mention his name. Dunaetz grew produce for the Ritz before moving to Sonoma County. “We still miss him,” Stegner says. “I mean, there are definitely good growers still around here, but Neil–he’s something else. He’s absolutely fanatical about the care he gives his plants.”

“I don’t sell produce I’m not proud of,” Dunaetz says. “If something is just good enough, I’ll sell it with apologies. If it’s really good, then that’s fine. If it’s so good that you wouldn’t mind dying right there and then because you had a chance to taste it–well, then I’m happy.”

Attaining happiness, it seems, has never been a simple feat for Dunaetz. He has found it difficult to be happy as long as he knows that others in the world are suffering.

Dunaetz, 47, spent most of his years in Chicago crusading for social justice. He paid his rent and bills by cleaning other people’s homes. But the bulk of his time and spirit went toward attempting to educate others about the wrongs of the world and trying to correct them.

The pressures, burdens, and sorrows of that way of life took their toll on Dunaetz. Feeling drained and depressed, he took a year off to travel around the world. And then he went back to the family farm in the Midwest and helped his father there for two seasons.

“And that was it. I knew that this is what I need to do. It’s what I want to do,” Dunaetz says.

“Out here in nature, you realize how huge it all is and how tiny you are. But if you can just let go of ego and let yourself be small, then there’s so much more you can be a part of. And when you finally see how insignificant you are, it’s such a wonderful, liberating feeling. Then you see it’s not up to you to save the world.”

“Being out here, growing food . . .” Dunaetz has the tendency to stop in midsentence to think and search for the right words. Sometimes he thinks out loud, circling the point he wants to make until he zeros in on it. Other times, like right now, he considers it silently. And then he finally continues. “These past five years I’ve spent farming, I’ve been the happiest I’ve ever been in my life.”

I suspect it’s this very sense of happiness that leads him to cultivate some of the best produce around. I assume that at some point Dunaetz made a deal with the universe. A deal that many of us make.

No matter how much we may believe in social justice and equality, we look around and see that things aren’t equal. And it very well might be a simple stroke of luck that Dunaetz and you and I were born in a time and place where we have the privilege to choose to do that which brings us joy. But you look around and wonder, “At whose expense?” So the deal is made.

And I imagine Dunaetz deciding that he would give up his draining crusade on behalf of the world’s suffering people and enjoy some happiness of his own. But in return, he would provide his community with the best possible food he could grow. Perhaps the privilege of choosing self-fulfillment just fell in his lap. But he would work to deserve it. Or at least that’s the way I imagine the deal going.

Dunaetz tries to tread lightly on the planet. These days, the word “consumer” is used as a synonym for “American.” But I don’t believe that would be correct usage in his case. He owns a sparse wardrobe consisting mostly of T-shirts, shorts, and jeans. He buys some food, but usually eats from his garden. He rents a place. But most of the time, he lives outdoors on the farm, inside a tent he set up in a clearing near the tomato plants. There’s a sleeping bag in there and a number of books. Right outside there’s a hammock, a couple of chairs, a cooler, and a table made out of four old garbage containers with a piece of plywood on top.

He likes to have a little extra cash so that he can go to a conference here and there. Other than that, most of the money he makes goes right back into the farm. But then there’s the car. He has to use plenty of fuel to take him to all the different farmers markets in the county so that he can sell his produce and make enough money to allow him to keep farming. He finds so much joy in farming, but I’m sure he sometimes wonders, “My happiness at whose expense?”

“Our policy in the Middle East has everything to do with getting cheap fuel and sustaining our way of life,” he says, with that passion in his voice and eyes and stance. Following the Sept. 11 attacks last year, Dunaetz gave away his produce for free at the next Sonoma Farmers’ Market. At the same time, he also gave everyone an earful of his take on U.S. foreign policy. That talk, I believe, must be pretty similar to the earful I’m getting right now.

“Our country imposes injustice and unhappiness on so many people around the world, and we’re keeping quiet about it because we’ve been bought off,” he continues. “We don’t want to change our lifestyle.”

What saves Dunaetz from sounding condescending and self-righteous is that, if you listen carefully, you can hear the sorrow in his voice when he adds: “If we had to pay the real cost of gas, I, for one, wouldn’t be able to go to all those farmers markets and sell my produce.”

Neil Dunaetz sells his produce at the following farmers markets: Napa and Healdsburg on Tuesdays; Sonoma on Fridays; Oakmont on Saturdays; and Sebastopol on Sundays.