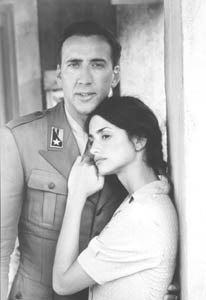 LAURA FRASER would take a love story over a war story any day. Blood and gore, it seems, make the San Francisco author cringe and shudder, which is what she does through much of Captain Corelli’s Mandolin, the new Nicolas Cage World War II epic that swings manic-depressively between operatic scenes of misty-eyed romance and frightening moments of blood-soaked slaughter.

A stripped-down version of Louis de Berniere’s bestselling novel, the film follows the wartime romance between an Italian soldier-mandolinist (Cage) and the Greek beauty Pelagia (Penelope Cruz), whose charming little island, Cephalonia, is occupied by the Italian army for several months during the war.

“E cosi e finito,” Fraser sighs gratefully when the credits finally roll. “And so, it is over.”

With that, we head out in search of pizza.

Fraser, 40, is the author of An Italian Affair (Pantheon, $22). Written in novelesque second person, the unique travelogue recounts the writer’s sexual and spiritual adventures with a married Italian professor, whom Fraser met while mending a post-divorce broken heart on the little island of Ischia, west of Naples.

During the two-year affair, Fraser met the professor in various romantic locations around the globe. Many of those spots–like Ischia, the Aeolians, and Catalina–were islands.

But more on that later.

“The movie is, as they’d say in Italian, esagerato,” pronounces Fraser, sipping a beer while waiting for our pizza to arrive. “It was a big, operatic tearjerker where every emotion is exaggerated–the love speeches, the earthquakes–everything is overblown.”

Overblown, in particular, are the stereotyped portrayals of the Greeks and Italians.

“Especially the Italians,” she says. “I mean. the first thing out of Cage’s mouth is ‘Bella Bambina!’ Then there’s all that ‘We Italians, we love food, and wine, and making love’ stuff. Hollywood has a tendency to look at all Italians that way.”

“It’s not just Hollywood,” I point out. “Italian travel brochures tend to push that image as well.”

“True,” she allows. “Don’t get me wrong. Italians do put a high priority on eating and drinking and making love. They live their lives with a sense of gusto that American’s don’t. It’s one of the things I love about Italy. But that’s not all there is to Italians. They have a serious, dark side too.”

“How did Cage rate as an Italian?” I ask.

“Well, of course, he is an Italian-American,” she reminds me. “Actually, his accent wasn’t that bad.”

SHE ASKS if I’ve ever seen the film Mediterraneo, the 1991 Oscar winner about a band of Italian soldiers who are transformed from killers into human beings while stationed on a small Greek island.

That film, she argues, was a better representation of Italians, and also showed the transformative power of beautiful places, particularly of islands.

“Islands, says Fraser, “are great places to fall in love. In the book, just going to Italy to get over heartbreak, wasn’t enough. I had to go to an island. On an island, there’s a sense of leaving the rest of the world. It wasn’t until I got on the boat to Ischia that I truly believed I could leave something behind me, could leave some pain behind me.

And, evidently, find something as well.

“I think that, to fall in love, you have to have a sense that you’ve stepped outside your regular world,” Fraser says.

“There’s something about a place like Catalina Island or the Aeolian Islands, north of Sicily, that gives you a sense of space, that makes you feel vulnerable, that makes it possible to open up to another person.”

Corelli and Pelagia might agree. Had they met in, say, San Francisco, who knows if they’d have even noticed each other?

“Though, as far as cities go,” Fraser says, “San Francisco is not a bad place to fall in love.”