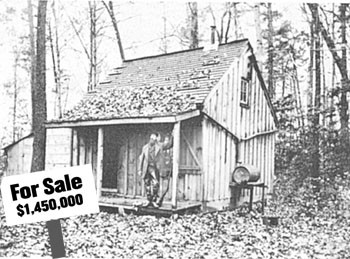 SHUFFLING BACK and forth down 101, it’s easy to forget the rural fields and forests that comprise most of Sonoma County. And yet despite the miles of open spaces, the price of housing keeps many hopeful homebuyers perhaps permanently priced out of the market.

Let’s face reality: You don’t have to leave the area (although I am), but the truth is that barring any major intervention by local government or massive recession affecting everyone but you, Sonoma County will continue to require above-average income in order to buy a safe home. Only 17 percent of Sonoma County households can now afford a median-priced home, leading a lot of folks to look northward for affordability.

Can you say, “Lake County”?

Sandra Geary of Re/Max’s Rohnert Park office says Sonoma County–which in recent years has seen a huge influx of homebuyers from Marin County and beyond–is in a declining market. Of course, coming down from space-shuttle heights means things are still pretty stellar. Geary says you’ll have a hard time finding a suitable home under $250,000. According to MLS statistics, there were 2,072 units priced under $350,000 that sold in the county through mid-September, for an average price of $264,763. This includes condos, by the way. Even one-bedroom condos.

How about Shasta County?

Even if you get lucky and find something for $250,000, with 3 percent down and financing at just under 7 percent, with property taxes and insurance you’re looking at an $1,860 monthly house payment. Lenders like to see three-and-a-half times that in gross income, or about $6,500 per month, before they’ll talk shop.

Many prospective homebuyers can afford this monthly payment, but don’t have 10s of thousands stuffed in their mattresses for the hefty down payment. Fortunately, Geary says, there are many lenders offering 100-percent financing programs. Here you essentially get a loan for the down payment as well as the mortgage and make two payments per month. As long as you make three-and-a-half times that, you can qualify. And you won’t even pay a higher interest rate. Of course, that still leaves a lot of folks priced out of the market.

SPEAKING of interest rates, they’ve dropped yet again as a result of the terrorist attack, making now a very good time to buy if you can afford it. The market has gone from the multiple-offer mayhem of last year to an environment in which sellers are willing to assume closing costs or grant a lease option, allowing buyers to defray the down payment if they know they are going to be coming into some money soon. Houses are also staying on the market 60-90 days.

But again, be realistic: You’re not going to buy your dream home as your first house: You’re probably looking at a condo.

Some municipalities even offer assistance for first-time homebuyers. Rohnert Park has a public fund that provides a gift of up to $30,000 for qualified applicants. Unfortunately, Santa Rosa does not. Geary warns buyers of looking to outlying areas such as Forestville or the Russian River area as many of these houses, often former cabins, have been upgraded but don’t always comply with county regulations. A new buyer could face a nightmare of violations and structural damage from floods and termites. “People love that area for the trees and privacy,” she says, “but pay attention to what you’re buying or you’ll open up a can of worms.”

If you’d rather eat bugs, worms, and pig parts on the TV reality show Fear Factor than leave the area, here are some possible solutions. One is to band together, either two couples or a group of single people, and buy a property through a joint-tenancy.

Another is so-called “granny units” or guest houses. “I totally believe you should be allowed to add a second unit to your home,” says Geary. “Why not have the county lighten up on this so that there’s more housing?” Guest houses would not only create more rental properties, they could also help first-time homeowners defray the costs of their purchase with income from a rental unit. But Geary says getting a permit to build a guest unit is “almost impossible.”

Meanwhile, the Burbank Housing Development Corporation is a Santa Rosa-based non-profit that seeks to solve the county’s affordable housing shortage with programs such as “sweat equity,” in which new homebuyers actually help build their (and their neighbor’s) home. This takes a commitment of 30 hours per week for six to 12 months and the buyers get the value of their labor in equity.

And if you’re going to sweat anyway, there’s always the desert. “I just moved my daughter to Las Vegas,” offers Geary. “I bought her a condo for $61,000.”

the current marketclimate as well as his peak income, and reduces his mortgage for his coming retirement years.

Then there’s the case of a young couple who bought a home through Cogbill last year at 8.5 percent. Since the rates have come down, he worked out a no-cost refinancing loan with no points, title, escrow, appraisal, underwriting processing–in short, no nothing. “We got them an above-market rate, but it was still less than 8.5,” he explains. “We lowered their monthly payment and they didn’t have to pay a dime.”

Then just five months later, when rates came down again, the couple refinanced yet again.

So while the gentleman paid more up-front to get a rock-bottom loan, the couple paid nothing to get an above-market loan that was still less than what they were previously paying.

So with low rates and peak properties, are you a fool not to run out today, get the groceries, pick up the dry cleaning, and refinance your home? “It needs to make sense,” says Cogbill. “You compare the amount of the points–closing costs and everything–to the payment savings.”

So let’s say you’re looking at a deal to pay $4,500 up-front in fees to save $100 a month on your payment. Since it’ll take you 45 months to break even, don’t do it if you plan on moving–to Bali, for example. If your home isn’t going to be home-sweet-home much longer, talk to a broker about the Young Couple Option mentioned above, and get yourself a no-cost loan. Even at an above-market rate, it still could save on what you’re paying now.

There’s one more piece of the planetary alignment. Refinancing means verifying your income all over again. So with the rate planet and property-value planet already in place, you’d better strike now if there’s any chance you may be laid off, as you’d have a hard time refinancing to lower your mortgage payment just when you need it most.