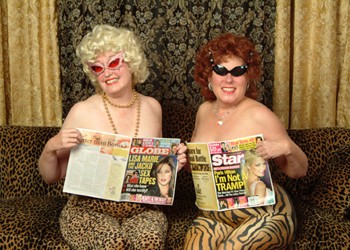 High Falutin’: The Trailer Trash Queens deconstruct the Lacanian virtues of ‘Calendar Girls’ as seen through a Cartesian model of Marxist criticism. Then they strip and play Bingo.

“Oh, my Lord! Is that a cockroach?” Pointing in horror, a colorfully attired Earlene (Diane Conway) wearing a slogan-coated sequined sweater (“Girls just wanna have fun!” “Diamonds are a Girl’s Best Friend!”) and tiger-striped tights with leopard-skin shoes, has just directed our attention to a tiny insect making like Jiminy Cricket on the wall as we wait for our jumbo slices of pepperoni pizza to arrive.

“Kill the damn thing for us!” Earlene commands me, sliding a paper napkin over and sternly adding, “I’d smoosh it myself, but I’m too scared.”

And so begins the postfilm conversation with Earlene and Pearlene, the San Francisco­ based comedy team best known as the Trailer Trash Queens. The creators of Earlene and Pearlene’s Deep Fried, Double Wide Fun, an astoundingly popular party experience, the Queens regularly appear at corporate events, bachelorette parties, and the like. They lead revelers through such trailer-culture rituals as “Bubba Eye for the Yuppie Guy” makeovers and “The Price Is Sorta Right” game shows (in which contestants guess the retail price of things like Spam, Cheese Whiz, and Velveeta). Their signature event is, of course, “Trailer Trash Bingo.”

The three of us have just finished watching Calendar Girls, the new comedy-drama starring Helen Mirren and Julie Walters as a pair of restless English matrons who conspire, with an assortment of other middle-aged members of the their local Women’s Institution club, to raise money for the village hospital by posing for their own seminude calendar.

“It gave me a whole new appreciation of being middle-aged,” says Pearlene, who is the author of numerous books including What’s So Funny about Being Catholic? “Here are these women, and they want to raise money for charity–which we do already, only our thing is bingo.”

“And theirs is boobs,” adds Earlene, who appeared under her real name in San Francisco’s long-running stage comedy Tony ‘n’ Tina’s Wedding.

“Wow, bingo and boobs!” laughs Pearlene. “Now I’m thinking we should maybe combine those and start doing bingo games in the nude. What do you think, Earlene?”

“It’s a fine idea,” grins Earlene, clearly impressed. “Nude bingo! That’s an idea that might really have legs–and I guess every other part of the body, too.”

“Or maybe,” laughs Pearlene, “a combination of the two.”

There is a moment of tangential speculation, as the women plot the specifics of how such a plan would be carried out. Eventually, they agree that it’s probably not worth the effort, and the conversation turns to the underlying moral of Calendar Girls.

“The moral is ‘Be yourself,'” says Earlene. “Any damn fool can be ordinary. Forget that. Just be your own bad self.”

“I think,” says Pearlene, “the moral is this: ‘If you find the true meaning of your life, you will find fame and fortune,’ whether that fame and fortune comes from being the owner of the Glam-O-Rama like Earlene, or being a highly desired bingo caller–or being Miss January in an English nudie calendar. You know how Joseph Campbell said ‘Follow your bliss’?”

“Sure, I saw that Myth show once when my television clicker got stuck on PBS,” Earlene replies.

“Well,” says Pearlene, “I think the moral of Calendar Girls is ‘Follow your boobs.’ That’s it! If you follow your boobs, doors will open where you did not know there were doors.”