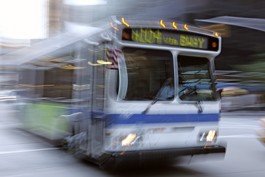 Transit may be sharply cut as California's fiscal woes deepen

Just as he’s hopping aboard the Route 48 bus heading up to Santa Rosa, Rohnert Park senior Jon Miles, calling himself a “forced commuter,” enthuses, “I couldn’t be happier with the bus service.” Asked where he places public transit on his list of state budgetary priorities, Miles replies, “Public transit should be the last thing to go. I can go almost anywhere I want for a couple bucks—anywhere I want to go!”

But Miles and his fellow transit bus riders may be among the biggest losers in the state’s budget meltdown. A Sacramento budget accord seems less than imminent. With no budget, transit provider decisions are not yet set in stone, but the way things are headed serious regional bus-service curtailment should be expected by May or June of this year, according to Bryan Albee, Sonoma County Transit’s systems manager. Albee confirms that as many as 30 or more hours of bus service could be eliminated daily from Sonoma County Transit routes alone.

Meanwhile, public transit is lauded as a proven means by which to combat environmental degradation, ridership continues to grow and demand for expanded service is repeatedly voiced via voter initiatives. Transit cutbacks put jobs both on and off the bus at risk—and transit cutbacks are shown to negatively affect the entire region’s economy.

Ed Duarde is an accomplished landscape artist who is partially blind. Duarde depends upon two North Bay public bus services, Sonoma County Transit and Golden Gate Transit, to get from Petaluma to both Santa Rosa and San Rafael, where he teaches oil painting. Additionally, Duarde and his students hop summer buses out to the coast for painting classes. Duarde says he wouldn’t mind paying a little more to ride, but that regular, dependable bus service is essential. “I get to work on transit,” he explains. “If they cut it, I can’t work.”

While slashing marquee budget items like education, parks and healthcare grab the headlines, what’s little discussed is that public transit, providing more than 1.5 billion passenger trips statewide last year, may take the biggest hit of all. According to a recent Rider Alert issued by Sonoma County Transit, close to $3 billion in designated transit funds have already been diverted from such use in the past two years alone. If the governor gets his way even the few crumbs still left on the budget table will be swept entirely and permanently away by next year.

Deputy director of Santa Rosa City Bus Mona Babauta cautions against alarming bus riders. “If we see a dip in funding,” she says, “we’ll reassess at that point. But we are concerned with the elimination of the funding altogether. Then we’ll have to cut back.” Like other North Bay transit lines, City Bus has seen continued increases in ridership. “We typically see a 2 to 3 percent increase each year,” Babauta notes, “and last year we saw a little over 5 percent increase in fiscal year 2008.”

Cutbacks in public transportation are particularly problematic in a recessionary atmosphere. A study conducted in October of 2007 by the Department of Economics and Political Economy Research Institute at the University of Massachusetts, Amherst, compared economic impacts of mass transit funding with education, healthcare, defense, construction and tax cuts for personal consumption. They found that dollar-for-dollar, mass transit produces more jobs than any of the comparable sectors, and is only surpassed by education in total wages and benefits from employment injected into the economy.

Twenty-three-year veteran bus driver Yvonne St. Clair wrote her own impassioned letter to Gov. Schwarzenegger, strongly suggesting he withdraw his transit annihilation plan. But it was St. Clair’s conversation with bus riders at the Santa Rosa Transit Mall that brought to life what’s actually on the chopping block. Those boarding the bus engaged in lively dialogue with other riders already seated concerning what cuts would mean for their jobs, childcare costs and arrangements, grocery shopping, schooling, social services or medical appointments. Their concerns mirrored what St. Clair wrote to the governor: “Please, think hard about it, before you affect so many lives.”