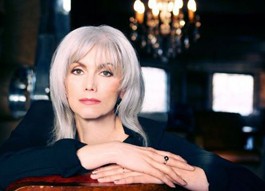 Early-bird pricing is in effect through March 20 for the Kate Wolf Music Festival, held June 26&–28 this year at Black Oak Ranch in Laytonville, and the announced lineup is one of the best in the festival’s history. Emmylou Harris (above), Richard Thompson, Patty Griffin, Mavis Staples, the Blind Boys of Alabama, Shawn Colvin, Dave Alvin, Buddy Miller, Ramblin’ Jack Elliott, Preservation Hall Jazz Band, Girlyman and Utah Phillips’ son Duncan Phillips are just a handful of the featured performers who tend to return time and again to a festival that is about relaxation as much as it’s about music.

“We’ve managed to put a scene together that really tends to get people to drop their shoulders,” says festival founder and producer Cloud Moss. A casual backstage scene, a nighttime campfire for song-swapping and the remote atmosphere amongst the trees make for a cathartic, mind-clearing weekend. “Even the most ardent traveling road warrior leaves considerably slowed down in their RPMs than when they came in.”

Such a loose atmosphere lends itself to spontaneous interplay, and it’s not uncommon to see performers hop onstage to join other performers, as when Steve Earle and Jackson Browne joined in on a set of Woody Guthrie songs together in the festival’s Revival Tent a few years back right after Joan Baez’ headlining set. And of course, the audience plays a huge part in the festival. “It wasn’t designed to always reiterate Kate’s music,” Moss says. “It was designed in the style in which she used to do things when she was alive here, and she did that in a very low-key, friendly, blur-the-lines-between-stage-and-audience kind of vibe. And it’s been successful on that level.”