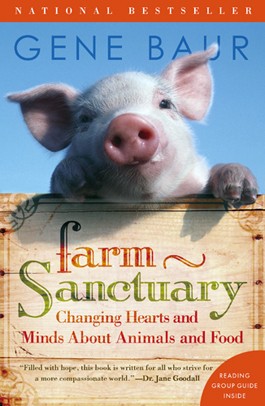 “People are buying food and supporting agricultural systems that are harmful to themselves. They are eating food that is making them sick and in some cases killing them,” says Gene Baur by phone from Southern California. As president and cofounder of Farm Sanctuary, a nonprofit farm animal rescue organization with refuges in upstate New York and California, Baur has spent some 20 years documenting abuses in the slaughterhouses and industrial farming centers across the United States. His bestselling book, Farm Sanctuary: Changing Hearts and Minds About Animals and Food, offers an extensively researched and harrowing account of the systematic abuse of the animals that end up as food on American plates. He appears at Copperfield’s Books on Jan. 31.

“Most people do not want to be cruel to animals but unwittingly support animal cruelty by their food choices,” Baur explains. He hopes to changes people’s attitudes about food by encouraging them to live in a way consistent with their values.

Information of this sort about the meat that the foodie-culture of the North Bay eats with gusto might be met with frustration. Does this mean goodbye to that nice pork belly at the bistro? Baur, a longtime vegan, does not see this as an issue. “Everything that is done currently with animal products can be done with plant products. The same is not true in the opposite direction. You cannot replicate broccoli by killing a cow. So I think the foodie world would do well to delve more into plant options as opposed to continuing to be stuck in the quagmire of eating animals,” he says.

Baur hopes that educating people about the cramming of sows into gestation crates and the injection of chickens with growth-inducing hormones that make it impossible for them to walk might make it easier to say no to poultry and pork. The environmental effects of resource-hungry industrial farming is another good reason to lay off meat, Baur says, since animal agribusiness is one of the top contributors to global warming, the shortage of fresh water and the steady depletion of fossil fuels.

“Historically, many societies, especially those that have existed for hundreds of years, were primarily plant-based,” he continues. “Meat traditionally has been an elite food and an indication of wealth and status, and that is still the case. The assumption is that we are supposed to eat meat, we’re entitled to eat meat and it’s good and appropriate and healthy to eat meat. It’s hard for people to try to get out of that narrow mindset, but that’s what our challenge is.”

Never in Her Wildest Dreams