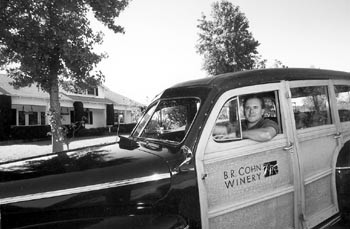 Hit man: Doobie Brothers’ manager Bruce Cohn has been takin’ it to the streets for 28 years.

Rock veteran, winemaker, olive oil purveyor–Bruce Cohn has it all

THE AFTERNOON is one of those tourist-swoon Indian summer ones made all the better by the fact that it’s a businesslike Tuesday in Glen Ellen, with almost no swooning tourists, save the two slightly tipsy couples in the B.R. Cohn winery’s tasting room.

Gold and platinum records honoring mega-sales for the rock band the Doobie Brothers add a decorative glint to the yellowy light that oozes through glass-fronted French doors into this room where I am stupidly standing, hoping that winery owner and Doobie Brothers’ manager Bruce Cohn himself will just, kind of, like, appear.

“Bruce is in his office,” directs the tasting-room attendant when I finally muster out a request as she bustles past me into an anteroom to procure more bottles.

Stepping out into the buttery heat of the day, I start tentatively up the hill toward a large white house. Hundred-year-old olive trees stand cool and tall, without regard to the asphalt drive that now paves its way around them. Farm and outbuildings are trim and cleanly painted, built low like the chicken and dairy barns they were intended to be when this 46-acre former Mexican land grant was first farmed.

Vines bursting with the hot fruit of Cohn’s acclaimed cabernet and chardonnay stocks weave down the hill to the left; terraced down the right are olive trees, and more pleasingly straight plaits of grapes.

Cohn decided against uprooting the olive trees when he bought the property in ’74 as a muffle against the noise of Hwy. 12 below. As the olive oil produced by this rare breed of French tree–known as picholine–grows in popularity, so does Cohn’s appreciation for their muffle and their muscle; estate-derived B.R. Cohn extra-virgin oil retails for $50 a bottle. And while the oil is certainly excellent, believe that this is a really nice bottle.

Cohn’s office is off to the side of the big house, his former home, now destined to be the winery’s new tasting room. He and his family moved recently to an adjacent property, establishing a more private residence and acquiring enough extra land to have a total of 100 planted acres of trees and vines. With his adulthood spent in the down-and-dirty of rock ‘n’ roll, and a Sonoma County childhood spent in the sometimes dirty work of agricultural production, Cohn perfectly fits the model of the gentleman farmer.

In a separate building behind the big house, Cohn’s staff is eating midday chocolate cake while he is ensconced in his private back office, overlooking the pool. The air conditioner blares, and his large desk has an organized scatter of wine bottles, paperwork, and three dirty-yellow rubber duckies. The walls are laden with the gold and platinum platters of success, and Cohn has lively brown eyes, a quick smile, and a deadly astute boss’ voice each time the phone interrupts the interview.

We are talking about his family–the other one–the Doobie Brothers, who, after 14 personnel changes and some 28 years as an outfit, are finally playing a gig at Cohn’s estate. Scheduled for Oct. 12 and co-billing musician Joe Walsh, this benefit concert for local children sold out in just three days.

Cohn met two of the original Doobies, Tom Johnston and Pat Simmons, while hanging around his brother’s San Francisco recording studio in 1969. Already a great favorite with the Hell’s Angels, the Doobies were looking to record a demo. They took to Cohn (“I owned a Harley,” he chuckles. “I was OK”) and he to them, recognizing their potential to be as big as Creedence Clearwater Revival, huge stars then poised on the brink of breaking up.

Cohn and his brother Marty recorded the demo for the Doobies and sent it to Warner Brothers. Warner sent a scout out to hear the San Jose­based band live. “But we didn’t know where to take him,” Cohn remembers, “because the Doobies were playing high school dances and pizza parlors and Hell’s Angels parties. And we didn’t want to take him to a Hell’s Angels party, so we took him to Ricardo’s Pizza Parlor,” Cohn laughs, “and there were, like, 20 people in the audience.”

Fortunately for fans of such ’70s rock hits as “Listen to the Music,” “China Grove,” “Black Water,” and countless others, the Warner’s rep was an oversized man with an appetite for pizza and country-influenced rock. He gave the thumbs-up, Warner organized a tour, Cohn quit his job as a television engineer and director at TV-20, and they set off on the road. He was 23.

“It was a disaster,” Cohn groans. “The whole tour. It was a total failure. We couldn’t sell any tickets. We went out with Tracy Nelson of Mother Earth and we called it the Mothers Brothers Tour, and, ah–it stiffed. The record stiffed–it sold about 10,000 copies–and there we were back in clubs and ducking beer kegs at Hell’s Angels parties again, taking guns and knives at the door and collecting two bucks.

“‘Oh, yeah,'” he smiles, lightly imitating a hippie voice, “we thought, ‘We’re going to get off of food stamps and brown rice,’ and it didn’t happen. But these guys were tenacious, and they wanted to stick it out, and record companies were different in those days; they would stick with an act and work it over two or three albums.”

The second album, Toulouse Street, was the one that worked the magic. Featuring Johnston’s original hits “Listen to the Music” and “Jesus Is Just Alright with Me,” the album sold 2.7 million copies and made the Doobie Brothers household and carload names as radio stations played–as they continue to play–those songs.

Eschewing the usual manager’s take in favor of receiving payments and royalties along with the group–“I’m a member of the band,” he says. “I just don’t play an instrument”–Cohn set about creating pension funds, retirement plans, tax-lessening fiscal policies, and other highly unusual artifacts, in the rock world, of financial longevity.

Among his projects, Cohn bought the Olive Hill ranch where we are seated, two strong wills, not eating chocolate cake. He did it for his sanity, to get back to his roots, having grown up on a dairy farm in Forestville. He sold his cabernet grapes to Ravenswood, Gundlach-Bundschu, Sebastiani, Kenwood, and other wineries, and he made friends with such winemakers as Charlie Wagner at Napa’s Caymus Winery, one of the premier vintners of cab.

In the late ’70s, Wagner–the man whom Cohn credits as being his oenological mentor–persuaded Cohn to try making some of his own wine, offering to tend it in his Napa vats. The problem was getting it there. “I was afraid to bring him the grapes because August [Sebastiani] would drive up and down the highways, and if he saw me taking grapes to Napa, he would cut me off,” chuckles Cohn. “So I brought them over at night.”

In six months’ time, Wagner invited Cohn over to taste the results. Cohn, more used to after-concert tequila, admits that he had little palate back then. But he tasted his own pinot and pronounced it good. “[Wagner] said, ‘That’s not good, that’s great!’,” remembers Cohn. “Then he poured the cab and asked me about that, and I said it was great, and he said, ‘That’s not great, that’s the best damn cab I’ve ever had from Sonoma. Put your name on that label.'”

What Cohn did was to put his Olive Hill designation on the wines bottled from his grapes by Ravenswood and other regular purchasers. A case of Olive Hill Gundlach-Bundschu cabernet traveled with President Reagan to China. When Cohn phoned the White House to inquire why that vintage was chosen, he was informed that, according to White House investigations, it was the best California cabernet available. It would not be understatement to say that Cohn was pleased.

During a lull in the Doobies’ career (there actually were no Doobies for seven years in the ’80s), Cohn had a hit managing the band Nightranger, and used the money to begin his own winery. With his olive oil gaining acclaim, he and Olive Hill oil partner Greg Reisinger are branching into the specialty market of dipping sauces for bread, aged vinegars, and other small complements to the good life of the stomach.

Music, wine, family, and fine foods: Which satisfies Cohn the most?

“There’s not one,” he answers. “It’s like, which kid do you love the most? Each business has its own personality, but they’re all a challenge. I’ve spent a lot of time in music–over half my life–and so a big part of me is still in that. I’ve spent a lot of my life as well in agriculture, so I feel a really strong kin to that. The food business is probably the most intriguing to me because it’s so new.”