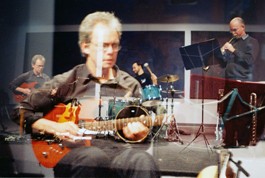 In 2005, the week of his wedding, Bill Horvitz was at the Oakland airport ready to meet his brother Philip, who was flying into town for the ceremonies. But then he got the page over the airline speakers that no one wants to get. “Some guy from JetBlue said, ‘Are you related to Philip Horvitz?’ and described him a little bit. I said, ‘Yeah, he’s my brother.’ They said, ‘Well, he had a heart attack, we think. He had a problem on the plane.’ I said, ‘Oh my God, where is he?’ And then he said that they couldn’t revive him.”

Horvitz went ahead with his wedding, and soon after, Philip’s memorial service in San Francisco, but in the ensuing months, music kept coming to the Forestville-based guitarist and composer that recalled his brother’s personality. There was so much personality to recall, actaully, that he put together a 17-piece band to perform the music, called The Long Walk. This weekend, he brings his loving tribute to the Glaser Center in Santa Rosa.

Philip Horvitz was a writer, dancer, choreographer, actor and performer; in countless plays, dance recitals and even a one-man show reenacting excerpts from the Sammy Davis Jr. autobiography Yes I Can, he made hundreds of friends. The Long Walk contains eight pieces with titles such as “Do You Wanna Dance?,” an upbeat Latin number; “Where Did the Monkey Go?,” based on a photograph Horvitz found of his smiling brother holding a sock monkey; and “The Long Walk,” a slow, somber piece for English horn. (“It’s a kind of haunting melody,” Horvitz explains, “that had more to do with me and my feelings of dealing with what it is to lose him.”)

A tightly composed work with elements of jazz, folk and new music—with spontaneous segments of improvisation conducted by Omid Zoufonoun—The Long Walk features three saxophones, three reeds, a five-piece brass section, a violin, a cello, bass and drums. Horvitz himself is on guitar, while his brother Wayne Horvitz, an alumnus of John Zorn’s Naked City and a prolific composer, plays piano. Philip might not be visible onstage, but he’ll be there somewhere. “As I was writing this music,” Horvitz says, “each of the pieces dealt with some aspect of his life, about him and his personality.”