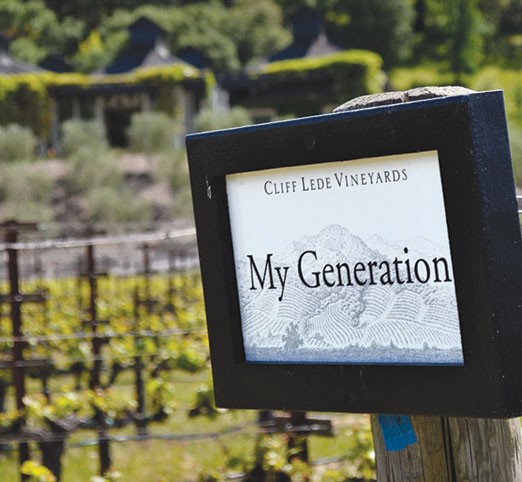 Don’t ask this Canadian about Okanagan Valley wine country. Cliff Lede discovered the better weather and bigger wines of the Napa Valley during a business trip in the 1990s, and I tell you man he’s living there still.

Before founding Cliff Lede Vineyards in 2002, Lede worked in his family’s construction company—I think “magnate” was his job title—and, as captains of industry must, collected Bordeaux. So when he purchased the former S. Anderson Vineyard, he replanted with Cabernet Sauvignon and friends—Merlot, Cabernet Franc, Malbec and Petit Verdot—with the help of marquee vineyard consultant, David Abreu. Ten years have gotten behind us since Lede built a new winery on the hill behind the tasting room. In the cellar lie oak tanks fashioned after those at Chateau Latour. The lucky man who gets to play with all of this is winemaker Chris Tynan, who, despite majoring in English, worked his way up in some of Napa’s top cellars.

The tasting room feels casual and familiar, all blond wood and sofas—like you’re inside a Pottery Barn catalog. Those guitars on the wall? Lede (rhymes with “lady”) also likes his rock music, as a stroll through the vineyard suggests. Each block is named for a song or album, mostly classic rock, with a few nods to Prince, the Police and Nirvana.

Lede’s own hit was naming his flagship wine “Poetry” after the “bottled poetry” quote on the iconic sign that welcomes motorists to Napa Valley.

You might blow all your wages for the week on a night’s stay at Lede’s five-room Poetry Inn, located just across the Silverado Trail, but you’re doing Napa right when you greet the morning in an open-air shower the size of a studio apartment. Yes, the rooms are named after famous poets.

In the reserve lounge and art gallery, “Backstage,” a retrospective of Grateful Dead poster art runs through July 12, 2014. Backstage is only available by reservation Thursday through Sunday, so if you can’t buy tickets for the estate tour ($75) or reserve tasting ($50), then you need a miracle.