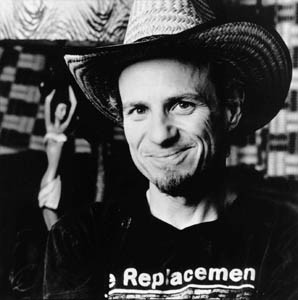 Mouthing Off: Comedian Bobcat Goldthwait headlines the Laughter Arts Festival at the LBC.

Bobcat Goldthwait has a 400-foot penis. It’s in storage somewhere in Los Angeles with a lot of other props used in The Man Show, the crude but addictive Comedy Central show starring Adam Carolla and Jimmy Kimmel for which the adjective-defying Goldthwait has been directing episodes.

Though best known for his unshakable appearances in offbeat films (One Crazy Summer, Burglar, Scrooged, Hot to Trot, Blow, and the Police Academy movies), and his death-defying standup routines (anyone remember when he set fire to Jay Leno’s chair?), Goldthwait has been gradually moving behind the camera, directing episodes of gleefully tasteless TV shows.

Then, of course, there was the legendary Shakes the Clown, which Goldthwait wrote, directed, and starred in, a film so critically reviled it was destined to amass a huge cult following–which it has.

But back to that penis.

When Goldthwait, 39, calls up from his home in Los Angeles–ostensibly to talk about his Jan. 26 appearance at the Luther Burbank Center’s big Laughter Arts Festival comedy event–I have to ask about the interview I once read where Bobcat signed off by saying, “I gotta go. I have to figure out how to stretch a penis 400 feet.”

“That episode actually aired, too,” he now says with a laugh. “It was a spoof of a scene from the movie Porky’s–the one where the lady gym teacher grabs the guy’s penis after he sticks it through the hole in the locker room wall. So we shot that version, and Jimmy Kimmel was playing the guy with his penis in the hole.

“But in our version,” he continues, “the gym teacher actually runs out the door with the penis, and she hooks it to the back of a truck and then drives around the block with it. Whatever. Eventually, I digressed to having kids skipping rope with it–which is kind of creepy, but that’s what we did.”

“Many, many things,” he replies. “Our effects guy is like Q from the James Bond movies. He brings me in one day and shows me all these penises. One was just a regular hose painted pink. Then he had stuff made out of Silly Putty. One was a big cloth penis, which was pretty elastic, actually.”

There is a short pause.

“You know,” I suggest, “after Survivor Africa ended, they auctioned off the props for charity. Maybe you should do that with The Man Show.”

“You mean auction off the 400-foot penis? Yeah. I’m sure someone would buy that. I know Jimmy bought Rosie O’Donnell’s bondage gear from that terrible Garry Marshall film, Beyond Eden or something.”

“Was it ever,” Bobcat agrees. “I’ll use one of my stock jokes: That movie was so bad I can’t believe I wasn’t in it. I’ve actually been saying that lately about Snow Dogs. Have you seen the commercials for that thing? It really looks like something I should have been in.”

At least doing the voice of one of those damn dogs.

“You know,” he says a few moments later, after learning that his hell-bound interviewer is the proud owner of a brand new Jesus Christ action figure (with Miracle Gliding Action!), “for years I’ve been wanting to make a movie called Teen Jesus. It’d be, you know, about Jesus during his angst-ridden teen years. Kind of a Dawson’s Creek meets The Greatest Story Ever Told thing. It’s something I’ve always wanted to get going. And from what you tell me, the action figure’s already a done deal, so I’m really encouraged about this now.”

An attempt to swing the conversation back toward his LBC appearance fails. Instead, Goldthwait slides into a discussion about standup comedy in the post-Sept. 11 world.

“You know, after any tragedy, you can crack jokes,” he says. “After. The problem with 9-11 was that we were still in the middle of it for a long time. We still are, I guess, but people have gone on with their lives, so some things are kind of funny again.

“When you’re in the middle of something that has not ended, you can’t laugh. When my mom passed away, I still found myself cracking jokes and stuff at the wake, you know? But while she was actually still dying, I wasn’t too hilarious to be around, that’s for sure.”

“They do say laughter is a healing thing,” I offer.

“Laughter is healing. Yeah, right!” he says. “I really don’t believe laughter is a healing thing. The majority of the laughs I’ve had in my life were based on cruelty. I don’t know how healing it was whenever I was getting ridiculed. Or when I was ridiculing someone else. But sometimes it was real fucking funny.”

At last he gets around to talking about coming to Santa Rosa.

“The comedy show, yeah,” he happily grouses. “They’ve given it some hacky acronym–the Laughter Arts Festival, I think. Which seems to suggest they were desperately scrambling for something that spells ‘laugh,’ though in this case it’s ‘LAF, ‘ without a U, a G, or an H. But with an F, and where the hell that came from I don’t know–though I am pretty fond of the letter F.”

Admitting that he’s been doing a whole series of these comedy events around the country, with different comedians at different times, he asks who else will be on the bill. Told that he’ll be performing alongside Richard Lewis, Kevin Meaney, and Jake Johannsen, Bobcat says, “Oh, wow, that’s a whole new

“So,” I ask, “assuming you change your mind and do show up, what can people expect from the experience?”

“Uh–me,” he replies, “regurgitating old routines from the ’80s, basically. That’s my act in a nutshell. I’ve been doing standup for years, and I have a certain act now. I hope people like it. Though when I play in the Midwest, people are sometimes kind of freaked out, ’cause I guess they expect me to be the guy I played in the Police Academy movies. So they’re shocked that I don’t just stand on stage and scream for 45 minutes.”

“You actually have something to say?”

“Hell no. I don’t have anything to say,” he laughs. “But I have taken the time to write a few humorous jokes.”