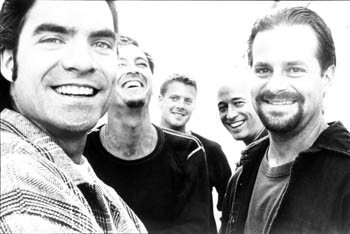 What started eight years ago as a two-man band with acoustic guitars and powerful voices honed in college coffeehouses has built up a full head of steam and become a record industry juggernaut of sorts. Train, a Bay Area band with Petaluma connections, is definitely on a roll.

The popular rock act picked up five Grammy Award nominations last week–including the coveted Song of the Year (a songwriter award) and Record of the Year (an artist and producer award)–on the strength of their Drops of Jupiter (Sony) album and the hit title track.

Those nominations put the band in such lofty company as U2, flower pop star Nelly Furtado, and soul singers India.Arie and Alicia Keys. Train’s ruggedly handsome singer, songwriter, and guitarist Pat Monahan, a Pennsylvania native who now lives in Petaluma, was on hand when the nominations were announced Jan. 4 at a press conference in Beverly Hills. The 44th annual Grammy Awards, televised worldwide, will take place on Feb. 27 at the Staples Center in Los Angeles.

Train also picked up nominations for Best Rock Performance by a Duo or Group with Vocals, Best Rock Song, and Best Instrumental Arrangement Accompanying Vocalists, all for the “Drops of Jupiter” single. The band, which launched their Drops of Jupiter tour earlier this year with a show at the Mystic Theatre, heads for Europe Jan. 13 for a two-week tour.

“Once again, this year’s nominations reflect many different musical points of view, from those established artists whose influence has shaped the evolution of our musical language to newcomers who speak with a unique resonance,” said Recording Academy President/CEO Michael Greene. “We are gratified to see so many truly talented singer/songwriters; they remain a vital part of music’s foundation.”

Other North Bay favorites nominated for a California Music Awards include Joe Satriani and Les Claypool.