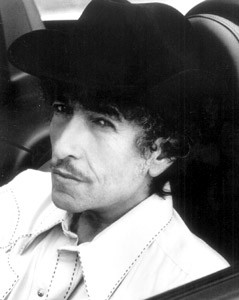 BOB DYLAN’S career has had its unfortunate anomalies, but with two good albums in a row, could it be too much to hope that he’s back in a groove? Time out of Mind, his last record, sold more than any of the last 20, suggesting that–despite evidence to the contrary–quality is still recognizable, and crap is shunned. While it wasn’t the greatest record since Highway 61 Revisited, it was the best “new” Dylan album in decades, leading one to believe that if Aerosmith or the Rolling Stones–or R.E.M. for that matter–actually put out a good album it would sell by the trainload.

It’s a heartening realization–and even better news is the fact that Dylan’s latest record, Love and Theft, is another good one. Like Time out of Mind, it contains strong songwriting and good playing–by a crack band led by young guitar whiz Charlie Sexton–as well as Dylan’s trademark voice and unique take on American folk music.

If you’re a Dylan fan, you’ll definitely want to get this one. If not–well, if you’re not a Dylan fan, then this record won’t turn you into one.

And therein lies the rub. At this point in his career, what could Bob Dylan do to win over new listeners? Nothing short of another generational anthem–and we sort of need one right now–would reinstate him in our good graces, and though this is a fine record, it doesn’t carry that sort of strength.

That said, these days Love and Theft seems like a good title for a record about America: what is capitalism, after all, if not the ultimate outcome of both?

This record is about America, although not the America I know, with its jet-setting young people, its bellbottoms and hip-hop and high-tech and extreme sports. This is an older America, the one that folksingers like to sing about, full of mysterious highways and noxious nighttime alleys and sleepy Southern landscapes and summer days. It is an America that people like Dylan have been romanticizing for years–and it is one that, dare I say, is totally irrelevant.

That doesn’t mean it isn’t musically dynamic, however. On this album, Dylan fools around with every possible musical style–from blues (“Lonesome Days Blues”) to vaudeville (“Bye and Bye”) to ballad (“Mississippi”) to, for lack of a better word, Dylanesque cynicism (“Tweedledum and Tweedledee”). On all these songs, Dylan’s voice is the same braying horn it’s ever been, but if it doesn’t bug you by now, it never will.

Love and Theft is the 60-year-old Dylan’s 43rd album. With that amount of tunes and words under his belt, it’s hard to believe he could pull off something unique–and indeed, there is something strangely familiar about everything on here.

Part of the familiarity should be attributed to his voice, which is as cozy and as easy to caricature as that of Homer Simpson. But it’s also something embedded in every other aspect of his work: the way he phrases a lyric, for example, and the point of view he brings to life, which is inevitably cranky rather than sweet (“Poor boy in a hotel called the Palace of Gloom/ Called down to room service, says, ‘Send up a room’ “).

STILL, although it may not be a fair expectation to have about any artist, the question that comes up with every new Bob Dylan release is not “Is it good?” but “Is it relevant?”

Perhaps more to the point: is anyone relevant anymore? Relevancy in rock music is, after all, the currency that Dylan invented with his early works of laser-sharp social critique, but he hasn’t really dealt in it in years. Dylan’s records, with their emphasis on Americana, are perhaps even more inward than most. That doesn’t make them bad records, but they’re not exactly where I’d go to look for understanding or relevance in times of crisis anymore.