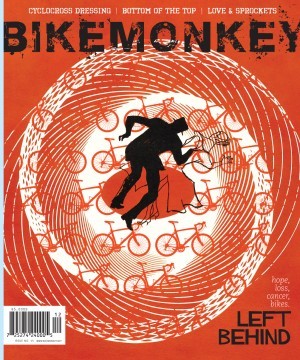 Maybe it’s because it my all-time favorite movie, but when the Bernard Herrmann score from the unfuckwithable Alfred Hitchcock film Vertigo was hijacked and reused in The Artist, I sided with Vertigo star Kim Novak: “My body of work has been violated by The Artist,” she said. “I believe this kind of filmmaking trick to be cheating. Shame on them!”

To no one’s surprise, The Artist director Michel Hazanavicius defended the usage as a tribute, which is what everybody says when they steal an idea verbatim without adding anything of their own to it. Taking music from a very famous movie and putting it in your movie is not a “tribute.” It’s just a stupid thing to do.

Yo, Hazanavicius! Take a cue from Bike Monkey, who actually pay tribute to Vertigo by at least slightly manipulating some of Saul Bass‘ title design for the cover of their latest issue:

See what they did there? See how they changed it, so that it fits a magazine called Bike Monkey? See how they’re not trying to pull one over on anybody, but slyly tip the hat to a master? (Like Antioch Arrow did with their stenciled Man With the Golden Arm-inspired LP?)