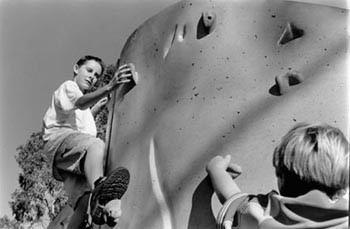 Climbing the wall: Nikos Laub, left, and friend kick up their heels on the Howarth Park climbing wall in Santa Rosa.

“Huckleberry came and went, at his own free will. He . . . was always the first boy that went barefoot in the spring and the last to resume leather in the fall; he never had to wash, nor put on clean clothes; he could swear wonderfully.

In a word, everything that goes to make life precious that boy had.”

–from The Adventures of Tom Sawyer by Mark Twain

Best Place to Prepare Your Kid to Play in a Symphony

OK, so maybe little Cody has expressed an interest in playing the cello in a symphony orchestra. Where can you go to help the kid break into the big time? A good start might be the Young People’s Chamber Orchestra sponsored by the Santa Rosa Symphony. Founded in 1998 by the symphony’s principal violist, Linda Ghidossi-Deluca, and the symphony’s music education director, Jack Palacios, this chamber group aims to take the traditional orchestral performance environment one step further and mold a group of kids into a highly trained string ensemble. The students stand throughout the performance, creating a big-bang sound and plenty of excitement. Concert soloists are chosen from within the orchestra. In the future the orchestra hopes to play not only in concert halls, but also at nursing and retirement homes, children’s day-care centers, and homes for the developmentally disabled. 50 Mark West Springs Road, Santa Rosa. 546-8742.–B.E.

Best Way to Tell Your Kid “Go Take a Hike!” and Mean It

Pee Wee Audubon, the youth branch of Sonoma County’s Audubon chapter of the Madrone Audubon Society, sponsors free monthly field trips. Kids under 12 and families learn about tide pools, bats, astronomy, Native American history, and other fun stuff related to nature and the environment. Some of this spring’s special events include the annual Owl Program (limited to 40 participants, reserve a space!), with a visit to the Bird Rescue Center; a celebration of spring’s first day with a bird walk at Spring Lake; “Herons and Egrets,” “Orienteering,” and “Dragonflies.” Not only can your kids participate, but also you can help organize trips. 433-1150.–S.L.

Best Temporary Diversion for the Young and the Restless

“We used to use Ping-Pong balls, but they were really noisy,” says Mark Sell, proprietor of Sebastopol Hardware Center. “The cashiers complained.” Now the network of clear plastic tubing mounted in the ceiling of the store contains soft foam balls, originally designed as cat toys. The system, commissioned three years ago by local physicist Robert Porter, uses a constant flow of air to send balls racing around the circuit of tubes, swerving through the gardening section and even outside the building. “Kids just love it,” Sell says. “It gives them something to do when they’re in line. It takes a normally boring time and makes it interesting.” 660 Gravenstein Hwy. N., Sebastopol. 823-7688.–Y.B.

Best Place to Zap Your Kids

Q–ZAR, IN ROHNERT PARK, is a scary place. Hyperventilating teens, strapped to the pituitaries with plastic armor and armed to the teeth with noise-making laser weapons, crawl and clamber through a black-light maze, stalking one another as loud, vaguely futuristic rock music pounds its way through their ears and straight into the cerebral cortex. Once their prey is located, a sonic blast from their guns, if the aim is true, causes a jarring vibration that runs all through the victim’s chest-plate. Take that! You’re out! Teens, it seems, have a practiced advantage over their elders, but with a bit of repetition, parents can become laser warriors as skilled as their own progeny. Did we say Q-zar is scary? Wait till the grown-ups discover it. This may get a whole lot scarier. 6591 Commerce Blvd., Rohnert Park. 588-8100.–D.T

Sonoma State University’s EXCEL Program, the popular academic enrichment program, offers all sorts of fun stuff for students in grades 4-10. The course variety is designed to stimulate and challenge participants, providing them with resources to enhance the “learning experience.” When I took the marine biology program (many a year ago), we got to dissect all kinds of sharks and look at their guts, which is always interesting for an 8-year-old. Although that particular program isn’t offered this spring, other great classes include “Kitchen Chemistry,” “Multimedia Presentation,” “A Day in Court,” and “Travel the Mystery of the Web.” Classes are offered from February through July. 1801 E. Cotati Ave., Rohnert Park, 664-2394.–S.L.

Best Place for Kids to Capture the Spirit of Traditional Baseball

Sitting in the tiny press box of Rohnert Park Stadium has caused more than one jaded sportswriter to comment on the special feeling that comes from a Sonoma County Crushers baseball game. You’re close to the action and get an intimate, up-close experience right out of Bull Durham. Kids can actually get autographs and run the bases. Some lucky youngsters can even have a live Crushers star in their guest bedroom, thanks to a program that allows local families to host a ball player. Now entering its sixth season in the Western Baseball League, the Crushers franchise has had more than enough time to get its act together and offers a seamless National Pastime product. With ex-San Francisco Giants sensation Jeffrey “Hac-Man” Leonard coming on board as the new manager, this season should offer plenty of excitement. Team owners Bob and Susan Fletcher, along with their hard-working staff, have done everything they can to bring a unique baseball experience to Sonoma County fans. And the whole thing is affordable. Crushers tickets range from $3 to $13, and there isn’t a bad seat in the house. The team’s home season opens May 26 against the Zion Pioneers from St. George, Utah. 5900 Labath Ave., Rohnert Park. 588-8300.–B.E.

Best Place for Kids to Pull a Disappearing Act

There is something oddly retro about the dusty light of the Mostly Magic Shop in downtown Santa Rosa–as if the whole place were an elaborate set designed to fool the senses. On most days, you’ll find a talented magician, like shopowner Jon E. King or Ken Garr, hanging around doing close-up magic. If you catch them in a good mood, they might even run a few card tricks by you, but these guys are accustomed to getting paid big bucks for their act, so don’t expect an hourlong floor show for free. Still, this is a great place to introduce your kids to the art of magic. If you purchase a few basic illusions, your child can quickly master enough showmanship to dazzle friends and relations. All manner of classic tricks and stunts line the walls and are for sale. There is also a small library of books and videos that you can buy to get a youngster well on the way to being the next David Copperfield. 311 D St., Santa Rosa. 523-2842.–B.E.

Best Local (Not So) Mad Scientist

FOR YEARS NOW, the nickname that students end up giving Larry West, an eighth-grade science teacher at Petaluma Junior High School, is “The Mad Scientist.” It’s possible, of course, that every science teacher in every school in every city of the world has been called “The Mad Scientist” at one time or another, but West more than deserves the honor. “He makes science really entertaining,” says my 14-year-old daughter, Jenna, noting that the nickname refers to his fondness for gleeful repetition of such terms as “endoplasmic reticulum” and–while psyching the students up for some microscope work–his oft-repeated admonition “The world of the small is very enjoyable.” “He also keeps rabbits’ eyeballs and earthworms in little jars,” says Jenna, “waiting for the next dissection day.”–D.T.

Best Place to Ponder the Bones

Overheard during a recent tour of Mission San Francisco Solano (commonly called the Sonoma Mission) was a wide-eyed youth whispering: “Walk softly, Mom. We’re stepping on the bones of Indians.” Whether the boy meant this metaphorically or literally–rumors are that thousands of Native Americans are buried on the grounds of the mission, slain by smallpox and your basic Christian zeal, a point never discussed by the mission’s enthusiastic docents (though there is a move afoot to build a memorial to the Native Americans beneath the streets of Sonoma)–the whispered warning stands as a potent reminder that history is invented by those who survive. 20 E. Spain St., Sonoma. 938-1519.–D.T.

Best Place to Dream of Flying

Up, up, and away. Every third weekend of every month, the Pacific Coast Air Museum–found in and around a nicely crammed building at the Santa Rosa Airport–holds one of its famous display days, in which one of the numerous classic aircraft (permanently displayed out on the lawn, visible to amazed eyeballs the moment one turns onto Airport Boulevard) is opened to the public. It might be the sleek A-6E intruder, the UH-1 “Huey” medical Helicopter (straight out of M*A*S*H), or the F-84 Thunderstreak. Knowledgeable docents are always on hand to point out the details of high-intensity flight, and the museum is positively loaded with aeronautic facts and trivia. 2200 Airport Blvd., Santa Rosa, 524-7240.–D.T.

ENOUGH WITH THE DAMN Play Station already. Those wan-faced, computer-addicted youngsters need to be out in the fresh air digging out scorpions from under boulders, wading in reed-clogged vernal pools, and poking about in educational piles of scat. And they can do all this and more during a nature hike at Fairfield Osborne Preserve on Sonoma Mountain–one of the county’s best-kept secrets. The rolling 7,000-acre area is a complex tapestry that’s home to eight different plant habitats, including ponds, a freshwater marsh, chaparral, an evergreen forest, grasslands, and a vernal pool. An educational resource since 1972, the land (which is maintained by Sonoma State University) is open to visitors on weekends. Guided hikes are offered every Saturday and Sunday at 10 a.m., beginning March 4. No reservation is necessary–just show up. It’s free for kids under 12; $3 for everyone else. The preserve also offers field workshops from March 18 through May 14 on a variety of topics, including geology, wildflowers, reptiles, and edible and medicinal plants. 795-5069.–P.H.

Just inside the main gate of the Sonoma-Marin Fairgrounds in Petaluma stands (or squats) a massive fiberglass chicken. Six feet tall and nearly 11 feet from beak to tail, the enormous egg-layer–built countless years ago as a symbol of Petaluma’s Egg Basket history–roosts in abject stillness, staring straight ahead with a fixed gaze that suggests either extreme concentration or full-out psychosis. The chicken, which appears to be half buried in the mud, is a favorite climbing structure for visiting children and is a popular photographic subject as well. Just remember, children: she bites.–D.T.