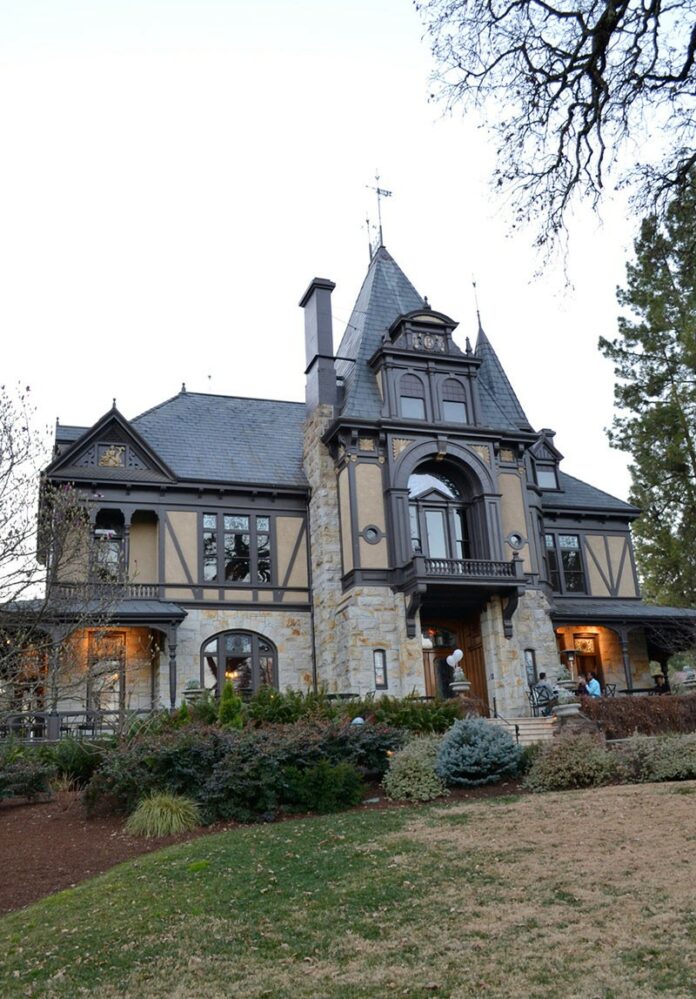 I can’t imagine what Mrs. Beringer might have thought about the scene unfolding today in her ladies’ sitting room.

Decorated with floral motifs in its stained glass windows, the ladies’ sitting room of the Rhine House is open to any member of the general public who wanders in—wine tasters, use side door. The atmosphere is loosey–goosey. While my companion first overshoots then undershoots the spittoon in a game attempt to practice the essential skill of tasting and spitting, a young woman points out to us above the general din how she swirled her wine too enthusiastically and stained her pink tights. From a menu that was splotched with spills long before we arrived, we order a sample of a wine that costs more than did two acres of Napa Valley land when Jacob and Frederick Beringer purchased it in 1875.

This is my first visit to the Rhine House. I’d long wondered about it. The mansion was built in a winningly Germanic late-19th-century architectural style for Frederick Beringer, who had his brother’s modest cottage moved to a less choice spot down the hill for the purpose. Jacob did all the advance work, first securing a job in Charles Krug’s cellar; Frederick was the finance guy. What else is new? Down to their trendy long beards, the Beringer bros look less like fusty pioneers of an antique era and more like the kind of moneyed Eurobrats—calling their vineyard venture “Los Hermanos”—who might fit smoothly into the Napa scene in 2014.

That this California historic landmark is a nicely landscaped, largely unsupervised playground that can swallow hordes of drop-in tourists with ease, I’m not surprised. But my expectation that the Rhine House represented a genteel escape from the crowd was off the mark. Staff in these cramped quarters are hard-bitten but accommodating, like veterans of a rollicking good dive bar. The tasting menu is incongruously themed to “Rock Stars,” detailed with song snippets from the Rolling Stones and the Cars.

The 2012 Private Reserve Chardonnay ($44) is fruity, buttery, standard stuff; the 2011 Quantum ($65), a soft, plush Bordeaux-styled blend. But the 2010 Private Reserve Cabernet Sauvignon ($160) is surely the key pour here. With dusty framboise aromas and a raspberry-infused finish, this is the kind of refined, top-tier wine that’s unremarkable precisely because it’s so seamlessly integrated. More memorable, the 2007 Nightingale ($40 for 375ml) is a fairly convincing Sauternes-style wine, rich in treacly mandarin orange and candied walnut flavor. If the ghosts of old Beringers are still about, instead of worrying about their parlor, they’re surely retired from care in a cask of this wine, murmuring, “Let it be.”