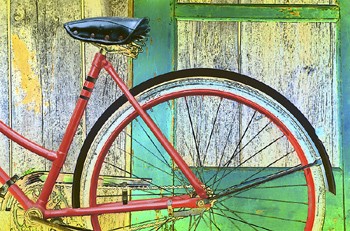 Bay in a Day Double Century

Geared Up: Pedaling from Novato to Palo Alto and back again is more than a casual day’s ride.

Bay in a Day

Learning the long, hard, 218-mile way that biking a double century is a different thing

Mark Birnbaum, treasurer of the Bay Area Bicycle Coalition, is a solid steak of lean muscle. Having spent the last year and a half planning the route for a “double century”–a 200-mile bike ride–through the Bay Area, he wanted to take a test run last month, and asked me to come along. I was to stay the night at his house in Novato, and we would depart the next morning well before dawn.

Mark met me at his doorstep in shorts and sandals, and invited me in. I immediately saw that his muscles greatly exceeded my own in tone, size and general fitness. I wondered if all long-distance cyclists need such muscles, and I wondered if I would be able to keep up with Mark on the next day’s ride. I ate dinner with him and his wife, Bev, and learned that Mark rides 40 miles every day to and from work. He has also been riding 100 miles every Saturday and Sunday since March.

Suffice it to say that I have not.

My training has amounted to just 20 miles per day since early May, and my heart silently sank at the dinner table as I realized I would probably not make it beyond mile 160.

Mark and I looked over my bicycle together. I had borrowed it from a friend, and Mark commented on the cracked tires and seemed concerned about the lack of pedal clips for my feet. My confidence dropped further. Even if my body lasted, my bike would certainly fail.

Mark woke me at 4:15am the next morning, and 10 minutes later, we left the house. It immediately began to rain. In fact, I have never known such a deluge to drench California in June. I have also never attempted to ride 200 miles in a day, and I pondered this coincidence of discomforts as I pedaled on.

At mile 40, a piece of glass punctured my rear tire. Mark had the flat changed in just minutes. I noticed then the numerous cracks decorating my old and rotted tires, and I feared that shards of glass would slip in and create more punctures at regular intervals throughout the day. I began to compose my surrender speech, not eloquent but certainly simple: “Mark. Just go. Go without me.” But we rode on together, up the back of the Berkeley hills, along the crest with a view of the bay and down into Oakland. My tires held air.

We had each fitted our bikes with odometers. Mine ticked very slightly faster than Mark’s, and when I arrived at mile 100, Mark’s odometer read only 95 miles. Upon hitting that century mark, I cheered like a fool, thinking I had accomplished anything worth thinking about twice. Of course, hours of work still lay ahead.

“A double century is a whole different thing than a single,” Mark said with an air of mystery.

Mark Birnbaum should know. In his 52 years, he has completed 29 double centuries and about 250 single centuries. But he is not a recreational bicyclist bent on breaking records and riding faster than other people. He sees the bicycle as a clean and practical vehicle and the symbol of a potentially better tomorrow. Mark Birnbaum lives by the bicycle and is annoyed by America’s fixation on automobiles.

“A lot of people still see bikes as toys,” he says as we pedal. “This country is way behind others in some regards. They have bicycle highways in parts of Europe, but Cal-Trans doesn’t like bicycles and they make life hard for us.”

As we ride, he points out several places where the bike paths are unmarked by signs, and he guides us around many miles of path that the local town council has neglected to the point of decay. Furthermore, over the course of the day, we have no choice but to run two dozen red lights that are just not sensitive enough to detect bicycles. These oblivious stoplights will leave the cyclist waiting until a car motors up from behind.

“This country is designed for cars. Bike coalitions have a lot of work to do,” Mark says grimly.

We round the bottom end of San Francisco Bay, pass Moffett Field air base, cross over to Mountain View and begin the journey back up north.

“Homeward bound!” I exclaim–but this is not quite accurate. It is true that in just 50 miles more we would cruise into San Francisco, where I still live, along with 800,000 others. Yes indeed, it would seem that I was coming home. But we cosmopolitans must now and again remind ourselves that San Francisco is not the center of the universe. On a double century, Novato is.

“A hundred miles more,” Mark says at mile 118. That’s 118 according to my odometer. Mark has only traveled 113 miles. It perplexes me that by this curious trick of physics I have to ride so much further than he does to reach the very same place.

We eat as we pedal. I have several peanut butter and jelly sandwiches, lots of dried figs and some whole-wheat fig bars. Mark mostly eats bagels and bananas.

“We’ve got a good hill coming up,” he warns through a mouthful of carbs. “You’d better eat quick.”

The winds on the peninsula blow erratically, coming now into our faces, now from behind, now from the side. We had planned on stopping for lunch in Woodside, but Mark says there is no time for such idleness.

“We might be battling headwinds all the way north. We gotta go,” he insists.But the wind proves to be fine. Along Crystal Springs Reservoir, the wind carries us north at over 20 mph uphill, according to our digital speedometers, and going downhill from Daly City to the San Francisco Zoo, we hit 40 mph. It’s a painful thing to see other cyclists on the far side of the road struggling into the face of the gale, but this is our day; those poor unfortunates will have theirs.

“We’re smoking!” Mark exclaims as we approach the south end of the Golden Gate bridge at 4:30pm. We’ve been riding for almost 12 hours. I have traveled 163 miles–Mark just 155–and I feel good. I even wish that we had 300 miles to go–yeah, a triple century.

But I crash at mile 190. I don’t fall over or get run over by a truck; rather, my energy level drops suddenly and drastically. Exactly half his age, I have been riding faster than Mark most of the day, often waiting for him at the tops of hills or at confusing intersections. But in San Rafael, as we wait at a red light, I realize that I am hurting. My quads, my neck, my shoulders–everything aches.

“A double century is a different thing than a single,” Mark muses calmly before pushing forward again.

I moan as I remount the bike and just manage to keep him in sight ahead of me. A cruel feature of Mark’s route is the extra 18 miles that he has tacked on for beauty’s sake. In growing agony, I follow him as he easily climbs several long scenic loops that we might just as well have bypassed. As we crest a steep hill in the gathering dusk of 8pm, he says, “We are now officially in Novato.”

I groan in relief. Mark laughs. “Congratulations. I’m really impressed you made it all the way, with two weeks’ notice and on a borrowed bike.”

A warm and fuzzy feeling floods my heart. I’m flattered. Mark then floors me by saying that I am the fourth person, as far as he knows, to have cycled around the bay in a day. Perhaps the other three even knew what they were getting into.In Mark’s comfortable suburban home, I eat a few cherries and load my bike into the big gas-guzzling family van. I drive out of the quiet Novato night thinking that a double century is indeed a different thing.

The Bay in a Day Double Century pedals around the Bay Area from Novato to Palo Alto and back again on Saturday, July 23. Check-in is Friday, July 22, at the Saints Lutheran Church, 2 San Marin Drive, Novato, between 4pm and 8pm. Ride begins 4:30-6:30am the next morning. $90; includes finish-line dinner. For details, go to www.bayareabikes.org.