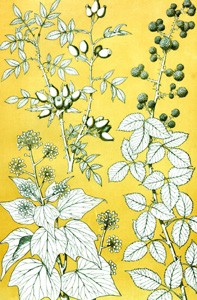 Oh, the idyll of standing in the bushes by the side of the road!

The blackberry has long gotten a bad rap, and not just by frustrated gardeners seeking to eradicate the stuff. “Bramble” itself means “envy” in folklore. Blackberries typically denote remorse when used as metaphors in fiction. And just as in fiction–Aesop’s version, at least–the best berries inevitably hang at the farthest reach or are hidden beneath a canopy of spiny leaves that tear savagely at the wrist and fingers grasping for them.

As it grows, the long thorny canes of the blackberry loop according to their own logic and weight. English peasants of past centuries believed that a child’s hernia rupture could be cured by repeatedly passing the child through one of the cane’s loops. The Celts loathed the blackberry as a symbol of evil, though they were easily persuaded to drink the fruit as wine. Britons considered it to be “fairy fruit,” and therefore forbidden, while Christian folklore characterizes the ripe berry’s color to be symbolic of Christ’s blood and the berry itself as a marker of spiritual neglect. Lucifer is said to have stamped upon the berries, which caused the growth of those hellacious thorns.

As for us, well, we just like to eat them.

And as July melts into August, the hard red of the blackberry begins to darken and sweeten and swell for picking. Thought to have arrived in the States in 1885 from western Europe, the voracious Himalayan blackberry was well established in California by the 1940s. The blackberry native to our area is that spiny limbed bush with small furry leaves that one sees so abundant, for example, in the Pt. Reyes National Seashore. There, one naturally figures it must be some kind of odd raspberry or fruiting rose. Quick-nosed animals are so canny that the fruit is rarely seen on the natives.

Unlike animals, humans find that picking the wild berry is almost as much of a pleasure as enjoying the fruit later. Standing deep in roadside brambles with an old colander in one purple-stained hand while reaching carefully for the high-hanging Aesop fruit with the other purple-stained hand is an informal summer ritual. Once heavy, the colanders are carted home, their contents dumped gently onto spread-out newspaper for the bugs to scamper off.

In my memory, blackberries are inextricably tied to childhood summers when my mother would attempt the chemical miracle of blackberry jam. A mysterious, boiling, sticky mass involving just the right amount of pectin–a seemingly mythic amount that could never, ever be exactly, correctly, gleaned–these exertions sometimes literally blew a lid and hit the ceiling, purple muck plopping thickly down to the floor as Mom swore and mopped and smoked in a hastily tied headscarf.

Less explosive, blackberry pie found the berries heaped in a pie plate like hundreds of irregular rubies, dotted with butter, dusted with sugar and cinnamon, mounded and glistening within the white crust before baking. The hot result was almost a disappointment when compared to the sensual visual promise of the raw pie.

I remain loyal to the concept of the “princess breakfast,” in which a bowl of fresh blackberries is lightly sugared and covered in cream to be eaten slowly with a silver spoon, the cream gradually purpling.

But perhaps blackberries are best when sweat streams into the clavicle, the sun roars in its midsummer fullness, a faint powder of dirt floats up from the road and juice stains and thorn snags mark the hands. Eaten by the road, standing in the brambles, when full and plump and hot, blown off for dust and popped directly into the mouth, the waiting colander be damned.