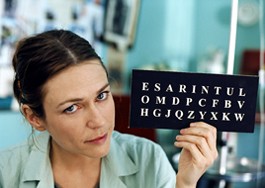 A t age 43, the editor of the French Elle, Jean-Dominique Bauby, was felled by “a cerebro-vascular accident.” It left him lucid but locked inside his paralyzed body. Julian Schnabel’s The Diving Bell and the Butterfly takes the inside angle on Bauby’s story. But mostly what the much-lauded film does is show us imprisonment from the prisoner’s view. Thus, we end up longing for what all prisoners long for: escape.

In voiceover, Bauby, played by Mathieu Amalric, mutters responses to his physicians when they say inanities like “I’m afraid it’s just one of those things.” There is a consolation prize, though, in the beautiful, passionate speech therapist named Henriette (Marie-Josée Croze), who coaxes “speech” out of Bauby’s one remaining muscle, the lid of his right eye. “This is the most important job I’ve ever had,” she says. (Michael Moore must be right about the French medical system.) Holding up a chart with the alphabet on it, the nurse allows the silent patient to speak one letter at a time.

The story of a man blinking out his memoir sounds spiritual, but it’s also about the tremendous power of ego. I think it’s the egotistical quality that made a director like Schnabel try it out. As a fine artist, Schnabel has an eye for the shiny stiffness of a formal Victorian gown or a sea breeze flittering a thin skirt around a brown thigh. But the voiceovers from Bauby’s book aren’t urgently written as you’d imagine from a book semaphored by an eyelid.

The fantasy sequences and flashbacks give us relief from the tight close-up of Amalric’s one lolling eye and one twisted mute lip. And unlike Christy Brown, who was a slum kid who trained his palsied left foot to write, Jean-Do was a famous man when he had his stroke. A magazine editor, his memories are fashion-magazine-worthy. The ordinariness of the ideas are right in the title: Bauby’s submerged shell and the flittering butterfly, his soul.

Catholicism sets in when the devout Henriette, moved to anger and tears when Bauby blinks out the message “I WANT DEATH,” hauls him to church and communion, leading to an ambiguous flashback (the film’s finest moment) of Jean-Do touring the Catholic tourist trap Lourdes. Bauby must have done something right by the Virgin Mary. He’s surrounded by devoted women who chant letters endlessly to encourage his self-expression. Onscreen we see reveries: a butterfly emerging from a chrysalis, an iceberg calving its ice, Marlon Brando in his guru makeup from Candy.

And the point? Those who endure life-threatening illnesses will wish they’d been nicer to their wives and kids. (Or live-in lover, in this case.) Emmanuelle Seigner plays the lady who mothered Jean-Do’s three children and who was left for a mistress. Seigner’s I-was-just-rogered-five-minutes-ago look is, as always, enrapturing, and Max Von Sydow’s small part as Bauby’s father has fierce dignity and affection.

Otherwise, this movie is a hymn to convalescence. In this, his third story in a row of a moribund artist, Schnabel persists in a sequence of druggie images, exploring not depths but shallows.