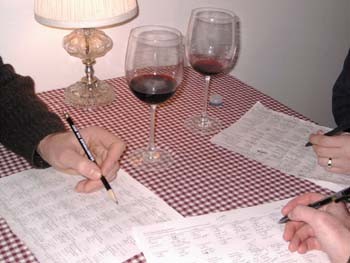 Science at Work: Our intrepid reporters distinguish the wheat from the chaff.

How to find a perfectly fine wine for under $10

Let’s say you’re walking down the wine aisle in a supermarket. You’re going to take a bottle home and uncork it with dinner. The wines in the store are conveniently grouped according to flavor–I mean varietal–and price. The bottles on the top shelf are over $35 and almost out of reach. The $8.99 varietal dinner party wines are conveniently belly-high. All the way on the bottom shelf are the $3.99 underdogs, so low you could just kick ’em.

These are topsy-turvy times in the wine market. As a result of flattening domestic sales and a grape glut still looming like the clouds of war, the fighting varietals are really ripping it up. It’s a great time to be a consumer of premium wines. Too bad about this beer-budget recession. So $50 wines are selling for $35. We applaud our neighbors–or anyway, those people in those hilltop houses–who scoop up these values, and we hope they’ll use their tax cut to further empty area warehouses.

But that nervous Nellie the consumer, whose confidence or lack thereof is scrutinized ever so closely, just isn’t pumped-up enough. Witness the hysteria over Trader Joe’s $1.99 Charles Shaw wine, which became a news event.

In this atmosphere of vinous bargains, is it indeed worthwhile to delve below the $10 . . . the $7 . . . the $4 price line? Often a $20 wine will score nary two stars and rate barely drinkable. What local consumers are surely missing is hard data on cheap wine. To that end, I organized a tasting panel to determine–in a fair and scientific way–the answer to the question, “How low can you go?”

Space does not permit me to review in detail the factors that determined which eight wines I chose for this wine survey, and the complicated formulations need not concern the layperson at this time. Here’s the gist.

Six bottles of recognizable name brands in the $4 to $8 range; a famous-name wine costing twice as much, and a boxed wine costing half as much, to provide “control groups” on both ends of the spectrum. See? Scientific.

For my tasting panel, I solicited the opinions of two esteemed colleagues, Korki and Pepe, both avid consumers of reasonably priced wines. This was a blind tasting, paper bags and all. Even the boxed wine was surreptitiously poured into a bottle. Our score sheet had five categories ranging from aroma and taste to overall impression. We scored each wine on a scale of five to 25.

I chose Franzia to best represent a varietal wine in the box because it’s Pepe’s house wine and he had some on hand. But he ranked it close to last, noting on his tasting sheet that it was “boring, artificial, thin” with a “modeling glue aroma.” I noted its “hamper” smell, while Korki concurred it had “dirty feet” on the nose. She also detected a hint of “butt.”

Korki: “Made stomach feel sick. Color was OK–fooled me. Stomach was sick. Blah. Worthless. Don’t eat with anything.”

This wine tasted like a stainless steel tank and was a rude guest on the palate. To be charitable to a local standby, I’d like to suggest that it was a bad batch. However, a gold label on the bottle proclaims it a “Consistent Quality Blends Award Winner.”

Pepe enigmatically noted, “Looks can be deceiving” in the color/clarity category. The taste ranged from “Kool-Aid” to “locker room.” The aftertaste was sweetish, yucky, bearable, a little spicy, and “dirty,” as applied to “deep fryer” or “winery floor.” Pair it with “sad leftovers,” Korki suggested. “Expect hangover.”

The label wants you to know that “ForestVille varietal wines are produced from the finest vineyards in Northern California.” Enough already. The ForestVille brand has maintained a competitive price point for those who must have change from a fiver.

Instead of the usual back label suggesting you pair the wine with an unpopular entrée like veal, the producers only note that “Sutter Home Winery is committed to finding a cure for breast cancer.” We’d like to toast their worthy effort, albeit with a more worthy wine. The best we could say was that it is inoffensive. “Could deal if I was short on cash. Eat with pizza,” Korki noted.

For $10.99, surely there could be no finer wine at the supermarket eye-level tier than a Mondavi. The label features a church tower rising above the coastal fog–or is it heaven?

While Pepe found a “faint spice, slight plum” aroma, Korki was “fooled again” by the “OK” smell. On the tongue, it inspired comments from “boring, sour, no fruit” to “icky, burning in chest.” I felt an ineffable, dispirited feeling and wished I had a beer.

It was especially disappointing because the much cheaper Mondavi Woodbridge,
a bottom-shelf standby, is a fairly reliable value in all the usual flavors.

I split with the panel on this one. They detected an “alcohol smell . . . slight cherry, a little oak” and found it warm and drinkable. I pegged it as the most generic bulk Merlot there ever was. Despite the enthusiasm of my associates, I maintain that it’s overpriced by $2.

This has the same Whole Foods brand label that appears on packages of toilet paper. But it was the only cabernet with varietal characteristics. It smelled meaty, smoky; Korki said it smelled like dinner.

Korki wanted to take it camping with her, while Pepe called it “complicated and mysterious, deep and private.”

Exercise caution with the brand in general. I investigated the Everyday Value French Merlot ($4.99) on a prior occasion and found it was as acrid and harsh as French bricklayer’s cigarettes. Merde!

The tasting notes became more strange. Korki noted that “shrub taste is so nice” in the overall impression category.

This wine was tops. Two of us thought it would have made a better example of Zin or Syrah. It was hearty, peppery, tannic, yet with a smooth finish. Pepe was conflicted, first wanting to lay it down for a year, then saying, “I want some more.”

If you’re dead-set on getting the biggest container of wine for the lowest price, you’re better off trucking over to Martini & Prati Winery on Laguna Road. For $12.90 they give you an authentic one-gallon jug of this historic family winery’s “new jug blend,” which is over a third cab and everything–including the kitchen sink–for the rest. It’s puckery, spicy, and clean-tasting–what you’d want to pass around a table of Italian food.

After the tasting, I joined the herd and grabbed a Charles Shaw. It’s pretty much like what they say it is. It’s sort of good and really cheap. It’s middling–like a U.N.-monitored truce between a belligerent cheap wine and a better one.

The conclusions of this survey are as groundbreaking as they are completely predictable. When scouting out a pop-it-open-in-an-hour value, we advise that you look for the label with the smallest region for the lowest price. At this price point, forget the name brands. Example: Any region northeast of Schellville is a good bet. California: iffy. Central Coast: great place for lettuce, maybe Chardonnay too. Between a $4.99 California or $6.99 Alexander Valley? Live it up, people.