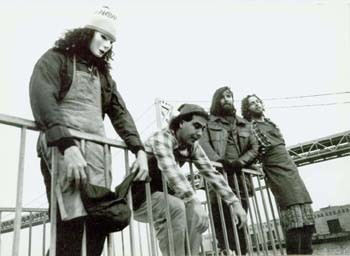 Fishbone’s‘Friendliest Psychosis of All’ EP (2002)

Buy one of the following King Crimson CDs:

Face Off: Buckethead reunites with the Deli Creeps this week at the Mystic.

Buckethead shreds his way to the North Bay

North Bay audiences will get a chance to sample Buckethead’s rapid-fire riffing and see his robotic stage moves for themselves when the gonzo guitarist reunites with his old San Francisco metal-funk band the Deli Creeps this week at the Mystic Theatre in Petaluma, a rare event that is highly anticipated in Bay Area underground rock circles.

Widely regarded as one of the most bizarre and enigmatic figures in American underground and experimental music, Buckethead (aka Brian Carroll, a former Napa resident) is probably best known to mainstream audiences as the replacement for Slash in the latter-day Guns ‘N Roses. But his avant-garde credentials are considerable.

After the demise of the Deli Creeps, which Mike Patton of Faith No More once affectionately described as “kind of like big, fat, butcher meathead Texas Chainsaw spoof-rock,” Buckethead moved on to a prolific recording career that has included stints with New York’s downtown scene-maker John Zorn and an impressive list of bass masters such as global fusion innovator Bill Laswell (notably Laswell’s 1992 Praxis project), Les Claypool (shredding the audience but good when he joined Primus onstage at Ozzfest ’99), Bootsy Collins of Parliament-Funkadelic, and Jonas Hellborg.

Of course, it would be easy to write Buckethead off as some sort of freak. His solo material (Dreamatorium, Day of the Robot) is often inspired by ’50s sci-fi soundtracks, but his music can also be extraordinarily beautiful and melodic. His most recent album, last year’s Electric Tears, is filled with reflective instrumentals.

This, after all, is a guy as equally comfortable contributing to New Age guitarist William Ackerman’s 1992 album, Opening of Doors, as he is to the recent Fishbone’s Familyhood Nexperience release, The Friendliest Psychosis of All.

Get ready for a heady blast of “21st Century Schizoid Man.” The quintessential prog-rock band King Crimson, whose seminal sound has influenced everyone from Nine Inch Nails to Tool, come to the Luther Burbank Center in Santa Rosa later this month. The band, which emerged from the ashes of Britain’s ill-fated one-off band Giles, Giles, and Fripp, scored a hit with their 1969 debut outing In the Court of the Crimson King, a challenging blend of rock, jazz, and classical music.

The current lineup boasts the twin guitar attack of avant-rock masters Robert Fripp and Adrian Belew, as well as Chapman-stick player Trey Gunn (a veteran of Fripp’s celebrated League of Crafty Guitarists), and drummer Pat Mastelotto. In the past year, the band recorded Happy with What You Have to Be Happy With, an EP released in October, and their just-released new album, The Power to Believe. King Crimson perform at the LBC on Thursday, March 27, at 8pm. Tickets are $40.

Meanwhile, roots guitarist Bill Kirchen–a bona fide Telecaster master who has contributed his twangy licks to recordings by Elvis Costello, Nick Lowe, and Emmy Lou Harris–returns to Sweetwater in Mill Valley this week to celebrate the release of his new album, Dieselbilly Road Trip. Kirchen, a former North Bay resident, is a veteran of Commander Cody’s Lost Planet Airmen who found his place in the sun a few years back on a piece of land near the nation’s capital. Kirchen, regarded as one of the fathers of twangcore, is a one-man steel-string tour de force who knows more than a song or two about hot licks, cold steel, and trucks. Check him out on Saturday, March 15. Showtime is 9:30pm. Call 415.388.2820 for ticket information.