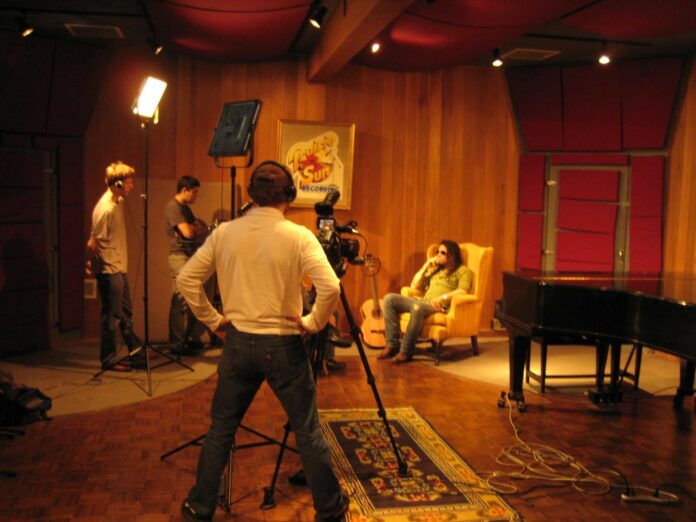 Back To Basics: Stockholm Syndrome makes music in chicken coops

By Lindsay PyleIt’s all about vibe. It resonates through the refurbished chicken coops. All the band members smile. All the band members groove to it. They comment on the vibes in the air today. Even Mooka says he feels them. “It’s a good day to make music,” he says, smiling. The sun comes and goes, punctuated with rain clouds and light showers. It is day 12 of 15 for Stockholm Syndrome at Prairie Sun Recording, and the band is getting anxious to finish.

Getting them all together in one room seems impossible, and it’s no surprise they’re wandering like zombies. They’ve all been crashing on couches, either at the guest homes on the Prairie Sun grounds, or at friends’ and families’ houses. From their aimless chatter, too, it seems like the more successful recording sessions happen in the wee hours of the night, making this 1pm session feel like an early morning wake-up call. They are in the process of going back to songs they’ve already recorded and fixing the small glitches. Dave and Danny talk about the keyboard in one track. It’s all clav and organ, dovetails and Wurlitzers. It is a foreign language. They tap their feet to the beat and listen for the slightest falter in tone. Terry, the editor, goes back to fix each note on a computer screen displaying a series of patterns that resemble fish bones. He’ll highlight a small section, cut it out, and stretch the last note over the space until the glitch is inaudible. Danny, who is working on his keyboard notes, asks Terry to repeat a couple of seconds, fix the glitch, then moves on. He goes back into the studio to re-record a small piece then reemerges. While it’s clear that this part of recording is the least fun, this is what moves jamming closer to a finished product.

Praire Sun stands alone on a small country road in Cotati. It’s an unusual place for a recording studio. No wonder Mark “Mooka” Rennick says that Prairie Sun Recording is special. Mooka is the owner of Prairie Sun Recording, a dream he realized in the ’70s, and has continued ever since. From the outside, it looks like any other small country house surrounded by red and white chicken coops. That’s because that is exactly what it was. On a recent tour of the grounds, Mooka points out three studios—A, B, and C, all of which were once chicken hatcheries. Mooka purchased the grounds from one of the major hatcheries in Sonoma County, renovated all the coops, heightened the ceilings, insulated the walls, and created recording studios in all of them. He says the age of the wood contributes to the sound. Stockholm Syndrome is the band who currently enjoying the refurbished studios, using Mooka’s vintage instruments and sleeping in his guest houses there at Prairie Sun. Could this be the vibe the band was talking about?

Looking like an old barn, studio C is actually two open rooms, separated by a sliding glass door. Undoubtedly, the studio feels like an old school hang-out space. Amps and drums line the walls, Persian rugs adorn the floor. The studio has seen its fair share of groups over the last 30 years, from Tom Waits to Carlos Santana to Nine Inch Nails. The recording space itself is painted like a Midwestern landscape—cornfields, cloudy skies, a silo in the background. Instruments are organized about the room. Mooka says that all of these instruments could be considered vintage, since he’s had them since he opened the studio. While it means they are more expensive to have repaired, he assures that the sound is worth it. He says that, like the studios, the age of the wood contributes to the tone and the pitch of the instrument. Each instrument takes on a unique personality of its own. A musician could really catch a good vibe in this room.

A few minutes later, Dave Schools is talking about just that. Dave Stockholm Syndrome’s bass player and he talks about the recording studio fondly, calling it an original space that favors playing as a band. Unlike many recording studios that record instruments separately and edit them together, Studio C at Prairie Sun allows the band to actually play together—to look at each other while they play, a characteristic that contributes to the sound. Dave admits that with so many alpha players in the band, though, playing together can sometimes be difficult. Stockholm Syndrome boasts membership from many seasoned musicians: Dave Schools from Widespread Panic; Jerry Joseph from Jerry Joseph and the Jackmorons, on vocals; Eric McFadden who has played with Primus and the P Funk All Stars, on guitar; Wally Ingram who has recorded with a long list of musicians including David Lindley and Sheryl Crowe, on drums; and Danny Louis from Gov’t Mule, on the keyboard. Dave says alpha players have a hard time blending into the background, and thus, working as a cohesive band can pose challenges. He assures, though, that their talent far outweighs their egos, and working on their second album has really “made them a band. Before,” he says, “we were just a bunch of musicians playing together.” On this day, all wearing concert T-shirts and talking in soft tones, away from the instruments, the guys are relaxed, and chat amongst themselves like old friends—poking fun, making jokes, talking music, food and grocery stores.

The whole scene with vintage guitars, Jimi Hendrix T-shirts, retro recording equipment invokes a feeling of another time, reflexive of a past rock n’ roll history. Dave says that while jamming together in that Midwestern-styled studio is somewhat old-fashioned, he assures that there is a sound it creates. He comments about how vinyl is coming back into style, and that which was old is now new again, saying that quality cannot be generically reproduced. The old model of bands being signed to big record labels and getting screwed is also out of style, he says. These days, bands can get exposure in a variety of ways, that don’t involve being the puppets of large record labels. He would know. His former group Widespread Panic became famous throughout the United States without the help of a large record label. For him, this is the only way, because having to fabricate sound based on what a label demands of you, is no way for a musician to live. The creation of Stockholm Syndrome asserts this belief by combining elements of reggae, pop, rock, funk and flamenco guitar to create a sound that does not fit into the pre-ordained categories rigidly enforced by large labels. Instead, he says, they are just a band coming together to make music together, and enjoy the vibe.