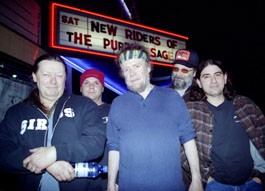 Back in the Saddle

New Riders of the Purple Sage hit the trail once more

When a couple of young musician fans approached pedal-steel guitar wizard Buddy Cage and suggested he join them in reviving the New Riders of the Purple Sage two years ago, he was less than enthusiastic. “I was absolutely unimpressed by the whole idea,” Cage says.

After all, he had parted ways with the seminal Bay Area country-rock band as they ran out of steam more than 20 years before, after having been a key part of the group through the 10 years of their heyday. And he was reasonably content as an in-demand session player in New York, where he had found a new creative outlet hosting Jam On, on the Sirius satellite radio service’s jam-band channel.”

I hadn’t heard anybody in the promotional area suggest any kind of money figure that was anything less than insulting,” he continues, “so I wasn’t really interested.”

But since Cage is calling from aboard an NRPS tour bus that’s crossing Pennsylvania, it’s obvious that something changed his mind. Call it a “what the hell” epiphany.

Pondering the possibility, Cage checked in with founding Rider David Nelson and discovered that former Grateful Dead bassist Phil Lesh had “cannibalized” Nelson’s Northern California band for a while. “So Nelson was kinda doing nothing,” Cage says, picking up the tale, “and I was doing radio, so I said, ‘Jesus, Nelson, you feel like doing this for a while, for a couple of tours?'” He did, and soon the new New Riders (Ronnie Penque and Johnny Markowski, both from a group called Stir Fried, on bass and drums, respectively, plus former Hot Tuna sideman Michael Falzarano on guitar) were up and, well, riding again. They play Petaluma’s Mystic Theater on Nov. 24.

“The three guys who came in to join Nelson and me, they picked all their favorite New Riders tunes to do, so we could go out and work,” Cage says. “It worked, and younger people started coming to these New Riders gigs, who were, like, in their 20s. And they knew the words!”

It’s been two years now, and the reliance on classic New Riders material—much of it written by John “Marmaduke” Dawson, whose failing health has taken him out of music altogether—is waning. These days, the set lists still include “some of the old catalogue of course,” Cage says, “but some new tunes are coming in. Nelson’s got quite a few.”

“During these same two years, a much younger Buddy Cage has also been on public view in the long-lost documentary Festival Express, an intimate video portrait of a rolling rock festival onboard a trans-Canadian train in 1970. Along with the Band, the Dead, Janis Joplin, Buddy Guy and other notables, Cage was there with Ian and Sylvia Tyson and Great Speckled Bird.

Along the way, he recalls, he was recruited by Jerry Garcia to join NRPS. “Garcia knew that he couldn’t any longer play the role of pedal-steel player for New Riders, and had broken the news to the band, like, ‘Sorry guys, I’ve got to stick with my real job, and you guys are going to need a ringer, a real steel player.’ And he heard me playing, and so he chose me.”

It was an offer too good to refuse.

Back in the 21st century, the updated New Riders gradually found a collective capacity for musical exploration that has made extended improvisational segments—such as those on the new CD—an important part of their performances. But Cage resists calling that a change. “I see it moving in the way we always were,” he says. “I see it evolving as something we’ve always done since 1970.”

We never considered ourselves a jam band back then. But I see us as certainly fitting into it,” Cage continues. “Everybody just keeps playing better and better all the time. Now we’re able to go places where we can just pull things out of our hat. I like that a lot.”

That’s why we’re all still together and still doing it,” he concludes. “As for whether we can make it go on for a few more years, that’s just up to the whims of change.”