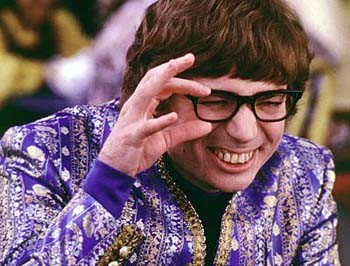 Austin Powers: The Spy Who Shagged Me

SOMETIMES movies are less significant as films and more important as cultural signifiers. Three years ago, director Doug Liman turned the burgeoning swing subculture into a national sensation with Swingers. In 1997, Austin Powers: International Man of Mystery created a similar stir by launching its outrageous mojo-working hero at a phenomena-hungry public, quickly adding such catch phrases as “groovy, baby” and “shagadelic” to the American lexicon.

In an age in which free love had come to be associated with its possible consequences–free STDs–Austin functioned like a raging collective id, a sexual superhero whose main power was the ability to bed gorgeous women despite his rotting teeth, shaggy chest, and super-sized ego. No doubt it was his unflappable lust for life that turned them (and us) on. The film was a clear admission that, in a culture starved for something new, re-cycled kitsch would just have to tide us over.

Austin Powers: The Spy Who Shagged Me picks up where the first film left off, smack in the middle of Austin’s honeymoon with the deliciously dishy Vanessa, the woman who turned Austin on to the heretofore unexplored “joys of monogamy.” Alas, Vanessa is no ordinary woman–in truth she’s a fem-bot emissary of Dr. Evil sent to seduce and kill our love-crazed hero.

Before you can say “Groovy, baby,” the honeymoon is over, and just in time, because the nefarious Dr. Evil is on the loose again, more hell-bent than ever on world domination. It’s up to Austin and shapely superagent Felicity Shagwell (Heather Graham) to stop him. To make matters worse, the power-hungry fiend has stolen Austin’s mojo, leaving him very, shall we say, un-shagadelic.

Anyone who’s seen the original film or any of the countless James Bond flicks the franchise satirizes can imagine the stock scenarios that follow: basically, a series of car chases and last-minute rescues, mixed in with lots of sexual innuendo, next-wave gadgetry, and scantily clad supermodels. Add a few campy dance sequences and extreme potty humor and you have a pop culture cocktail that references everything from Jerry Springer to the chi-chi coffee craze of the ’90s.

And that brings us to one of the film’s low points. In a supposed effort to spoof the product-placement frenzy that makes some blockbuster films resemble billboard-size virtual catalogs, Spy includes over-the-top usage of logos or products from Starbucks, AOL, and, most pointedly, a garishly painted new VW bug. Memo to director M. Jay Roach: You really can’t have it both ways.

What’s more, though the film’s lead sex kitten, Miss Graham, certainly fills out her halter-tops quite nicely, she lacks the comic timing and innate sauciness that Elizabeth Hurley showcased last time around. Spy’s absurd anti-plot frequently places the two superagents in compromising positions. Sadly, the only thing truly compromised is the hope of any sexual chemistry between the pair.

What’s truly impressive about Spy is the talent of Mike Myers, Canada’s Man of a Thousand Faces. Besides reprising Austin and Dr. Evil with immeasurable gusto, Myers also portrays the villainous Scotsmen Fat Bastard, a metric ton of unadulterated lechery who thrives on mayhem and dreams of snacking on small children. It’s not an overstatement to say that Myers virtually disappears into the role.

With its take-no-prisoners approach to humor and machine-gun barrage of gags, Spy is a hit-or-miss affair. But, building on a marketing campaign designed to sell it as an antidote to The Phantom Menace, the movie will likely rock the multiplexes and produce more sequels. Like George Lucas, another retrofitted nerd, Austin Powers’ force is destined to be with us for a very long time.