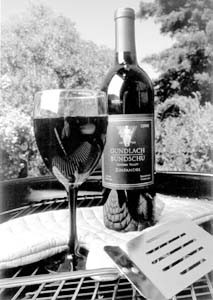 ZAP! NO, this is not a rerun of Batman, the campy action/adventure/dark comedy/tilted-camera series of the small screen that preceded the multimillion-dollar movie franchise. Under the Eats banner, ZAP is an acronym for Zinfandel Advocates & Producers, a far-flung fraternity of winemakers, wine marketers, and wine drinkers who possess a particular affinity for wines made from the zinfandel grape.

Each year, ZAP stages several road shows around the country, the largest of which takes place in San Francisco. This year’s S.F. ZAP event attracted 5,500 people–you read that correctly; two fives and two zeroes–all eager to sample and savor the latest bottlings of what many people refer to as “America’s wine.”

For years, the zinfandel grape was believed to have originated in the New England states, then transported to the West during California’s gold rush. That certainly would explain why most of our state’s oldest zin vines have their roots deeply embedded in the Sierra foothills.

Only in recent months have scientists brought zin’s heritage into question through high-tech testing. Now the strong belief is that the grape actually originated in Croatia. DNA fingerprinting, it would seem, may not be enough to banish O.J. from the fairways, but it is sufficient to rewrite California’s wine history.

Domestic in origin or not, there’s no denying zinfandel’s important place in the California wine industry. Before we blinked, there were nearly 50,500 acres of zinfandel vines planted in the state–more acreage than cabernet sauvignon, chardonnay, merlot, or any other varietal–with more being planted all the time. And based upon the ZAP turnout in San Francisco, it’s obvious that not all of California’s zinfandel grapes are doomed for white zinfandel purgatory–not by a long shot.

Sonoma County has emerged as a hotbed of zinfandel production, with the Dry Creek Valley, which spreads north and west from Healdsburg, considered by some as the “holy land” of zin. As the summer barbecue season kicks into gear, there is no better time to stock up on homegrown zin bottlings because there is no better red wine match for barbecued food than zinfandel.

It is zin’s inherent fruitiness that makes it the perfect foil for barbecued chicken, steak, and lamb; the fruit flavors provide a beguiling contrast to the char of grilled meats.

This is no mere ranting and raving of a professed zin lover. It is a contention backed up by no less of an authority than Weber-Stephen Products, manufacturer of Weber barbecues, through its new book, Weber’s Art of the Grille (Chronicle Books, $35). Subtitled “Recipes for Outdoor Living,” the book includes wine pairing suggestions for most of the featured recipes, and in many cases, the suggested wine is California zinfandel.

One of the finest zins made in the state each year comes from Napa Valley’s Grgich Hills. This should come as no surprise, especially to those who believe that everything in the world is somehow connected, since winemaker Mike Grgich traces his roots to Croatia.

To this shopping list, you may take comfort in adding:

Seghesio 1997 Sonoma ($10). Mildly spicy and fruity, it may be overwhelmed by barbecued dishes, but matches perfectly with pasta. A bargain hunter’s dream wine. 3 corks.

Quivira 1997 Dry Creek Valley ($16). Steadily improving with each vintage. This ’97 is the best yet. Jammy, concentrated, and nicely balanced. 3.5 corks.

Now for the bad news: Sonoma County zins in general, and Dry Creek zins in particular, have earned such a sterling reputation that some bottlings now sell out quickly. This kind of demand creates shortages and inflates prices.

So the next time you hear ZAP!, it could very well be the sound of sticker shock.