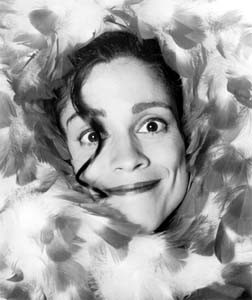 COMEDY IS EASY–interviews are hard: “He was so fucked up,” says comedian Marga Gomez of the reporter who preceded this one during a spate of telephone interviews she endured while plugging the upcoming Fifth Annual Lesbian and Gay Comedy Night at the Luther Burbank Center, at which Gomez is the headlining act.

Of course, for comedians, the ability to hustle one’s act is second in importance only to actually having a sense of humor. For Gomez–who enjoys the tripartite distinction of being a woman, Latin, and gay–the twin gifts of comedy and the hard sell paid off during the stand-up renaissance of the early ’80s, when she first took the mike. Back then, the alternative was starvation.

Now, after dozens of television appearances, a juicy guest role on HBO’s Tracy Takes On, a handful of theatrical monologues, a comedy record, and several film roles (she acted with Dustin Hoffman and Sharon Stone in Sphere), Gomez prefers the soft sell. This is, in part, why the attractive comedian recently moved from the entertainment epicenter of Los Angeles to Williamsburg, an arty neighborhood in Brooklyn, N.Y.

“Los Angeles was about being quiet and being more concerned about your appearance than what you were doing. Now I’m on a track to make my work stronger than ever,” explains Gomez, now in her late 30s.

“A year ago I was trying to do all the right things to get to that Barbara Walters special where I would cry about what kind of tree I am.”

Gomez’ new strategy is to concentrate on her work and let her fame come naturally. The plan has proven artistically gratifying.

“I get so much pleasure from working in different ways and from relying on a loyal following as well as a network of artists and presenters throughout the country. I get to really experiment and go a little bit deeper to try to make an impact,” says Gomez, who is confident that national recognition is on the way. “I’m already a celebrity in gay circles, which is fun, especially with people I’m going to try to date.”

Her act, full of urbane, sexy patter about modern love, aims to be both arty and funny. But “funny” is a relative notion that Gomez confronts daily on the road. Consequently, she sometimes adjusts the sophistication of her act to suit the venue or region she’s in.

“Something I do in New York could actually ruin me for playing in Iowa,” explains Gomez, who counts Lenny Bruce, Lily Tomlin, and Richard Pryor among her influences. “When you’re playing a bar, however, you can’t get too low. I enjoy it, though it takes me hours to try to make it smart as well as filthy. When I play a big place, I don’t go for the easy laugh that you can get in a bar where the people are drunk and can’t take anything ‘smart.’ I try to play to a higher level of intelligence and give them a couple of boners along the way.”

The comedian says she is looking forward to returning to the Bay Area, where she feels the local crowds’ interest in work transcends the notion of “special interest” comedy.

“When I play Santa Rosa, what’s great is that it’s kind of like coming home again. There are a lot of people who know what I do and appreciate my style–it’s pretty idiosyncratic out there,” she says. “Even though I am Latina and lesbian, I don’t exactly operate totally from that perspective–I feel pulled by many different forces and influences in my life. My interests are pretty vast. Consequently, my expression is kind of hard to pin down.”

Gomez is confident that her biographical details have little bearing on audiences’ perceptions of her.

“I don’t think people are pigeonholing me. The crowds aren’t, at least. If they come to see me, they’re coming because they know I’m funny,” she says. “There are white folks that just love to be part of the struggle, so they’ll come see a Latina if she’s spinning plates on sticks–‘We must support her!’ I love them–they mean well.”

To wit, Gomez performs a bit lampooning the PC mindset called “The Serious People’s Collective,” a fictional group that organizes comedy shows as well as boycotts of them.

“I was raised on that kind of politically correct entertainment, but I don’t think I would have lasted this long unless people thought that I was just funny,” she says.

LIKE MANY comedians, Gomez culls inspiration from her daily experience and keeps a keen eye on her surroundings. “I watch people. Being in New York, however, you just don’t know who to watch. I’m kind of a voyeur,” says Gomez, who admits to “always being on the job.”

“Sometimes I would rather just have authentic moments that are complete in and of themselves and there’s no exploitation of it. Comics and storytellers are always looking for material and for stories,” she explains. “What’s really a drag is when people think I might use stuff from their lives when it really isn’t that interesting. Something mundane might happen and someone will say, ‘Oh, you’re going to use that!,’ as if they’re being so scandalous that I would. First of all, I don’t invade people’s privacy–that’s kind of bizarre.”

The award-winning Gomez (she has captured Theatre L.A.’s Ovation Award and San Francisco’s Solo Mio Award, among others) is preparing her latest theatrical work, Jaywalk, an incendiary riff on her L.A. experience, for the upcoming New York International Fringe Festival. She’s also tending to her love life.

“I want to marry my dog. I might even have a wedding at the end of June,” she quips. The pending nuptials with her Jack Russell terrier come on the heels of a seven-year relationship Gomez recently ended. Now the comedian enjoys what she call “relationship bites.”

“The lesbians I’ve known are not good at dating. We’re good at relationships, so all our dates are like relationships–even a first date. We would go to dinner, discuss our innermost secrets and the secrets of our ex-lovers; then we’d have dessert, pay the check, and maybe I’d have the guts to pop the question ‘Do you want to come back to my place and weep?’ Then there would be couple’s counseling and division of property by the second date,” she says with a laugh.

Unfortunately for her fans, Gomez’s LBC appearance is just a one-night stand. But, true to form, she issues an earthy invitation to enjoy the show.

“Come see me if you want to see a Latina lesbian with a nice ass!” she says.

Marga Gomez performs with Doug Holsclaw at the fifth annual Lesbian and Gay Comedy Night on Saturday, June 12, at 8 p.m. at the LBC, 50 Mark West Springs Road. Tickets are $16 general, $13 for students and seniors (the show benefits the Sonoma County Pride Committee). For more information, call 546-3600.